Tranquillity on a bike 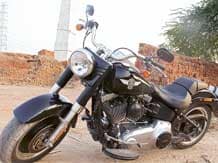 I am riding a Fat Boy through Delhi and its an experience unlike any Ive been through. This isnt boarding school humour the Boy in question is the same one that was enshrined in cinematic legend in Terminator 2 when Arnold Schwarzenegger came screaming out of nowhere on a Harley-Davidson motorcycle, steering with one hand and firing a shotgun with the other.

Its one thing to be a seven-time Mr Olympia wrestling this monster, quite another to be a South Asian of average height and build such as myself doing the same. And so, at first, the prospect of riding this 330 kg, 1690 cc V-twin bad boy has put a knot of fear in the pit of my stomach. Knowing that this is a Special Edition, armed with an incredible 50 per cent more power than the stock version which translates to 130 horses of pulling power doesnt help.

But what a surprise it turns out to be. The bike is refined and easy to ride, even in Delhi traffic. The clutch is hair-trigger, allowing the bike to leap ahead and cut in and out of gaps that belie the size of the beast. The seat is pretty low and my legs are stretched out in front, resting on footboards so they can take a breather in between pumps of the footbrake and frequent gear-shifts. Since I ride an Enfield Classic 500 for my daily commute, the stance is a little weird but

Im amazed how quickly I get used to it. Soon, it pretty much feels like Im sitting on my favourite Goan rocking chair at home, playing a video game.

The only difference is that my favourite rocking chair does not have twin Screamin Eagles exhausts right under my seat that are currently burning a hole in my right thigh and backside. This means that the Harley is hell in gridlocked city traffic since idling and puttering around at low speeds generates tons of heat.

Its when you get a chance to open up the Boy that Dantes Inferno ends and Heaven begins. A twist of the throttle produces growls that morph into roars as you surge effortlessly ahead of pretty much anything on the road. In fact, if you're not in the habit of regularly riding a bruiser like this, you have to remind yourself to brace for the mind-bending torque 132 nm at an incredibly low 3250 rpm that the Fat Boy produces. Once you get it right the right dance between brake-pumps, throttle and gear-shifts on decent stretches of road as you weave in-and-out of strands of traffic you realise that you havent had such a feeling of tranquility in a very long time.

And if vanity is part of what youre after, this is a hard bike to beat. No heavy-duty chrome here, which is the signature style of many of Harley-Davidsons machines. This one sports a mean looking matt black finish. Its wide handle bars are fat (1.25 inches), its tyres (200 mm in the rear and 140 mm up front) are fat, and its fenders are guess what right, fat.

The best part is that it has a classic, vintage Hardtail' frame and look but with the rear shocks artfully concealed inside, hence its being part of Harleys Softail family. The ride, therefore, is laid-back and plush, hardly registering any of the pavement bumps and blips that are a patented part of the Indian road experience.

It goes without saying that those who love riding sports bikes like the evergreen Yamaha R1 or BMWs revolutionary S1000 RR or even Triumphs mega-popular Speed Tripl e or even, dare I say, my Enfield Classic 500 should not expect even a mildly ambitious cornering experience with the Fat Boy. (Its simply not made for it with its point-it-and-gun-it mandate.) Plus, motoring along at a steady 140-150 kmph, like I was on the Yamuna Expressway, either required a windscreen or a well-fitted closed helmet. And for the real speed mongers, it may not even come close to the Ducati Diavel or Harleys own Night Rod in terms of torque. Others say Victory Motorcycles, headquartered in Minnesota (USA), is a geuine Harley-Davidson beater. But this is all largely academic. Cruising is what the Fat Boy is all about.

The best part for those who have fat wallets to match the girth of the bike it retails for Rs 15.6 lakh, a whole Rs 5 lakh cheaper now because its assembled in Harley-Davidsons Haryana plant. For the rest of us, no matter what you make for a living, once you ride it, you will undoubtedly be calculating how much those monthly EMIs will set you back.