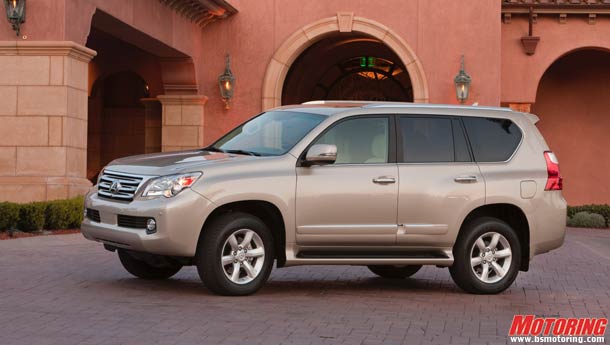 Toyota Motor Corp, the world’s largest automaker, will recall the Lexus GX 460 sport-utility vehicle that Consumer Reports magazine rated a “safety risk” because the model can roll over in certain driving conditions.

Toyota, which is paying a $16.4 million US fine for violations in the recall of vehicles with defects tied to sudden acceleration, will fix software in the 2010 SUV’s stability control system, the company said yesterday in an e-mailed statement. About 13,000 GX 460s will be repaired, including 9,400 in the US and the rest in countries including Russia, Oman, Saudi Arabia, the United Arab Emirates and Canada.

“Toyota seems to be trying hard to stop the trouble from spreading,” said Yoshihiro Okumura, who helps oversee the equivalent of $365 million at Chiba-gin Asset Management Co in Tokyo. “The volume of the recall isn’t so big this time, so the impact on profits appears limited.”

The company last week halted production and sales of the SUV after Consumer Reports issued a “don’t buy” recommendation, saying the GX 460 may be prone to rolling over in emergency driving conditions.

The magazine, published by the non-profit Consumers Union in Yonkers, New York, issued its rating on April 13.

Lexus dealers will have the software fix for the one-hour repair by the end of April, Toyota said. Owners will be notified by mail beginning in early May and may bring in their GX 460s as soon as the repair is available.

“From the moment we heard about this issue, Lexus and our dealers acted quickly to resolve the situation,” Mark Templin, Lexus group vice president and general manager, said in the statement. “Our dealers will now personally reach out to customers to set up appointments to make this modification.”

Toyota is also recalling 21,000 Land Cruiser Prado SUVs in left-hand drive countries including Russia, France, Oman, United Arab Emirates, Saudi Arabia and Kuwait. The company is halting production of the model at its Tahara plant in Japan from today through April 28 and at its Hamura plant from April 22 to April 28, Mieko Iwasaki, a spokeswoman for Toyota, said by phone today.

Tests were conducted on all Toyota and Lexus-brand SUVs, and the flaw was found only in the GX 460 and Land Cruiser Prado models, which share the same stability control system, Iwasaki said.

The company agreed yesterday to pay a record fine levied by the National Highway Traffic Safety Administration for failing to promptly report flaws with accelerator pedals that led to a recall of 2.3 million vehicles. Toyota denied breaking safety rules in settling the case and agreed to pay within 30 days.

“I am pleased that Toyota has accepted responsibility for violating its legal obligations to report any defects promptly,” Transportation Secretary Ray LaHood said in a statement. “By failing to report known safety problems as it is required to do under the law, Toyota put consumers at risk.”

LaHood said on April 5 that documents showed the company “knowingly hid” defects tied to unintended acceleration for four months, violating rules that require notification in five days. The fine, which is less than 2 per cent of Toyota’s projected net income for the year ended March 31, may bolster the case for plaintiffs seeking compensation from the Japanese carmaker.

“The fine is coming on top of costs from increased incentives and vehicle testing,” said Tatsuya Mizuno, director of Mizuno Credit Advisory in Tokyo. “At this point, there’s no telling what will come of the lawsuits.”

At least 180 consumer and shareholder lawsuits are seeking class-action status and at least 57 individual suits are claiming injuries or deaths caused by sudden acceleration incidents in Toyota vehicles.

The carmaker could have contested the fine, which is the maximum amount NHTSA can levy.

Toyota, in an e-mailed statement yesterday, “denies NHTSA’s allegation that it violated the Safety Act,” and said “we believe we made a good-faith effort to investigate and develop an appropriate counter-measure.”

The NHTSA fine Toyota will pay may be followed by additional penalties because the pedals supplied to Toyota by CTS Corp “had two separate defects that may require two separate remedies,” the agency told the carmaker in a letter the day it announced the civil penalty.

Toyota executives have testified at three congressional hearings this year, and the company will be the focus of the House Energy and Commerce Committee on May 6, Chairman Henry Waxman said April 16. Waxman, a California Democrat, asked Toyota for documents on unintended acceleration for a hearing his panel will hold on potential electronic causes.

A recall in January of 2.3 million vehicles involved pedals from CTS, based in Elkhart, Indiana, that were slow to return after being depressed as well as pedals on various vehicles that could become stuck.

Toyota’s US sales unit is in Torrance, California.