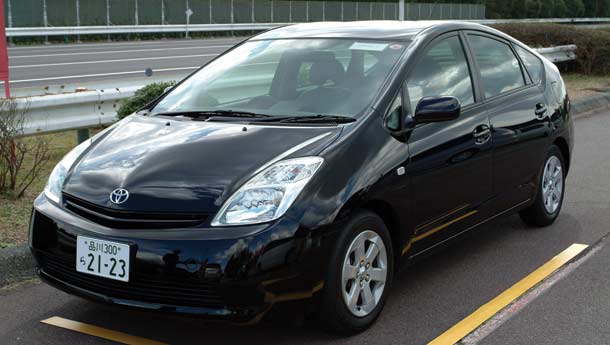 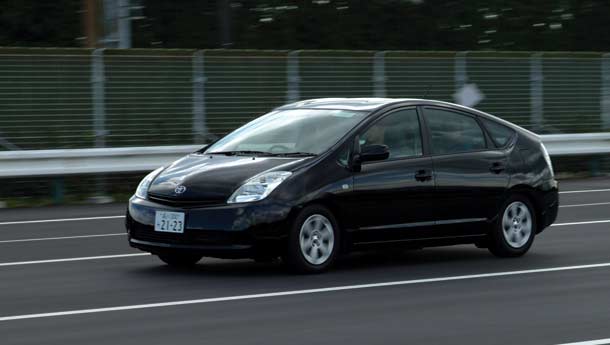 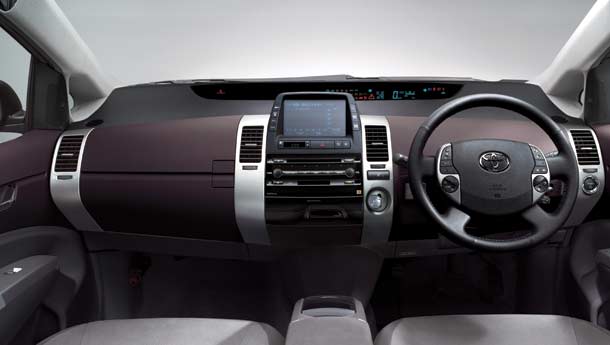 Oh, I see, I see.
Fascinating.
Huh huh.
How interesting.

Whenever any engineering gee-whiz explains something technical to me, these are my standard responses, usually accompanied by some vigorous nodding of the head at strategic moments. It’s another matter that I don’t see at all, but at least it makes the other guy happy. Now things get complicated when the engineer speaks only Japanese, and you have an interpreter to whom you have to address these questions, and then wait for a routed response from the other side. So instead of asking any intelligent questions, I simply got into the second generation Toyota Prius and drove it.

Rewind. I was at Toyota’s Higashi-Fuji R&D centre/test-track in Japan, along with hundreds of journalists from around the world. We were precision-bombed by Toyota’s engineering machine, which exposed us to the cutting edge work taking place there in automotive safety and environment technology. On display was stuff like fuel cell and hybrid vehicles, cars incorporating safety dynamics technology and a host of other interesting (no, really) innovations (See box: Tech it for granted). While many of them are ready to feature in tomorrow’s cars, the new Prius is a futuristic machine that is here, now and in front of me.

When Toyota launched the first Prius in 1997, it was the world’s first mass-produced hybrid vehicle. Since then, it has sold over 1,20,000 units all over the globe (in fact, Motoring> had driven the car back in 1999). And at the New York Auto Show held early this year, Toyota’s president, Fujio Cho, unveiled the second generation Prius. When it went on sale in Japan this September, Toyota thought they would sell about 3,000 units, but contrary to expectations, they have received firm orders for over 17,000 cars. And this is just the beginning.   Compared to the earlier model, this Prius looks much better, and by itself, is quite good-looking too. In fact, with its sharp looks, Toyota could even badge it a Scion – Scion being an all-new fresh brand targeted at the youth market. The Prius is not a small car, and you enjoy its size more so on the inside. The interior layout may be conventional, but it does feel like you’re sitting in a mobile high-end Bose stereo system. That feeling is mainly because of a long, and I mean really long, dark LED display with its white letters and innumerable colourful symbols dominating the dash – some futuristic automotive hieroglyphics of sorts. And it doesn’t end there. The steering wheel in front of me is also peppered on both ends with various function switches – once upon a time a steering wheel was used for navigating, now it’s a full navigation system-cellphone-inboard diagnosis-stereo-whatnot interface. Ahh, the steering wheels of progress.I step on the brake pedal and press the start button – nothing spectacular, compared to the cars of yore with their red starter buttons, this was again like one that you’d find in an electronic appliance – and hear a chime, which means I’m ready to go. There are some things that I’m supposed to understand by looking at the LED display, which tells me what’s happening while the Prius is on the move, but hell, I just want to drive it. I shift the stubby little gear lever, actually more joystick than gear lever, to D and with a whirr, the car’s on the move. Hmm, not bad. The initial pick-up is quite good, and soon the Prius gathers speed with ease, without any hesitation whatsoever. I expected that with all those high-tech widgets inside, the drive wouldn’t be this seamless. But that obviously is not the case.

I am scheduled for two laps on the Higashi-Fuji circuit, and it includes two banked sections, one to be tackled at 80 kph, and the other at 100. The Prius is quick on the move – if not for the passing armco barriers flashing by, I wouldn’t realise it. It’s that quiet. Can’t believe there’s a proper IC engine inside there somewhere. Running on low rolling-resistance Yokohama rubber, the Prius rides very well, and the sensation is that of a car that’s actually heavier than it looks. The laps also included a brake-and-come-to-a-halt section, and at the particular spot indicated by red pylons, I slam on the brakes, and guess what, the car stopped. There must be something to it, this stopping thing. And to answer that, instead of going through the ‘when in doubt, ask the engineer’ process, I tackled the heavy folder Toyota had provided us, which had answers to all the questions you didn’t even think of asking. So ladies and gentlemen, here’s where I tell you why this car is so special, and why, by the very fact that it drives so well, it is a testament to the engineering excellence of the white-coated guys at Toyota R&D.

The second generation hybrid system in the new Prius is called THS II, which as you rightly guessed, stands for Toyota Hybrid System, developed around the concept of ‘Hybrid Synergy Drive’. The raison d’etre of a hybrid system is that emissions are astoundingly low and fuel efficiency is unbeatable (best in the world, according to Toyota). Conventional IC engines are not that efficient in burning fuel and also cause noxious emissions. The five main components of the Prius’ system are a 76 bhp 1500 CC superbly efficient IC engine, a 50 kW electric motor, a secondary nickel-metal hydride battery, a generator that charges the battery and supplies power to the motor, and finally, a clever little thing called a Power Split Device, which transfers power between the engine, motor, generator and wheels in any combination. Repeat after me: engine, electric motor, secondary battery, generator and power split device. Got that?   Okay, let’s now drive it in real life. You’re off to office and start the car. At start-up, only the electric motor is used, and you’re still using it when you exit your building compound and slowly build up speed while you reach the main road. Now, you have reached the main road, which means you can pick up speed. At this moment, the engine has also got into the act. Now both the engine and motor drive the wheels. While at it, that clever little generator also recharges the battery with whatever power is surplus. All this is happening inside, and you’re blissfully tackling the traffic. You get a clean stretch, and stomp on the pedal. The Prius accelerates with a surge, thanks to the battery which supplies additional energy. Wow, now you have left the traffic behind, and approach a roundabout. Time to cut down the speed. At this time, the Prius understands that all that energy build-up shouldn’t be wasted. So the motor, driven by the car’s wheels, acts as a generator, and turns that kinetic energy into electrical energy and it gets stored in the battery. This bit is called regenerative braking, which you’ll appreciate in the stop-go-stop-go part of your daily commute (now you know why that braking section was included in my lap). You have come to a full stop at the roundabout because the cop says so. Fine, the engine has automatically shut off, and when the cop allows you to move on, the Prius proceeds ahead, using the...? C’mon, have you been paying attention? Yes, the electric motor. Very good. And so on and so forth. And the best part is that the system is self-sufficient, you just have to fill fuel once in a while and don’t have to charge the car at all.

Now what makes this Prius better than the earlier one is that it is much more responsive. This is thanks to improvements in combustion in the IC engine, a new high power and high torque electric motor, a faster rotating generator that allows for better acceleration at low and medium speeds, and a more compact battery that features a higher power density than the previous one. And there are other significant improvements in the new Prius that I place in the category called P2C2E (Process Too Complicated To Explain – borrowing from Salman Rushdie’s Haroun and the Sea of Stories).

Nevertheless, the new Toyota Prius is an amazing machine, and there’s hope for mankind after all. I would love to drive one here in Mumbai, and experience it over a longer period of time. The kind of technology I appreciate is the type I don’t have to try to understand.