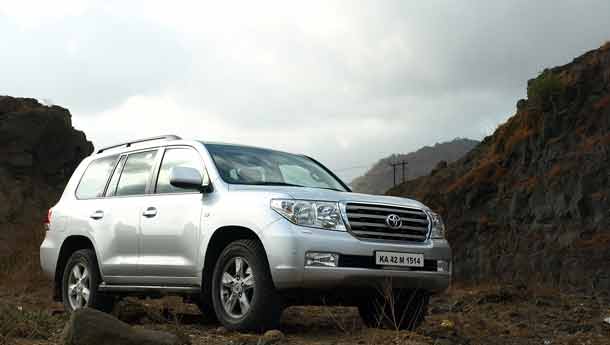 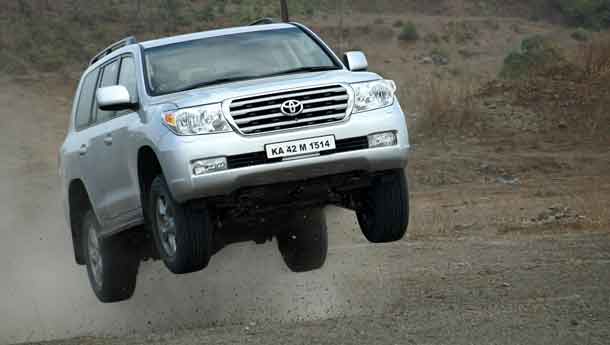 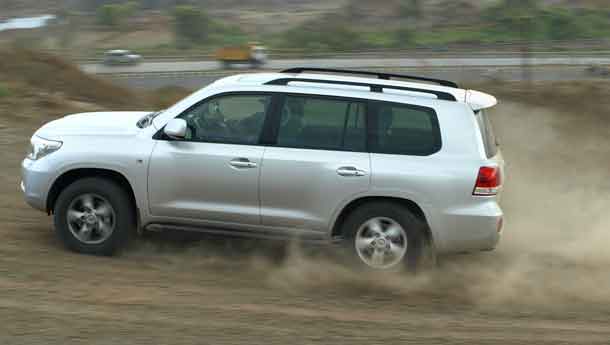 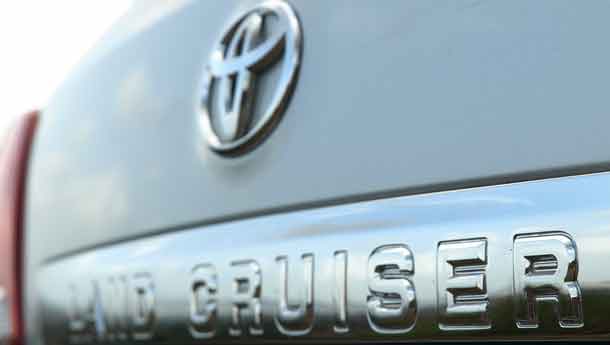 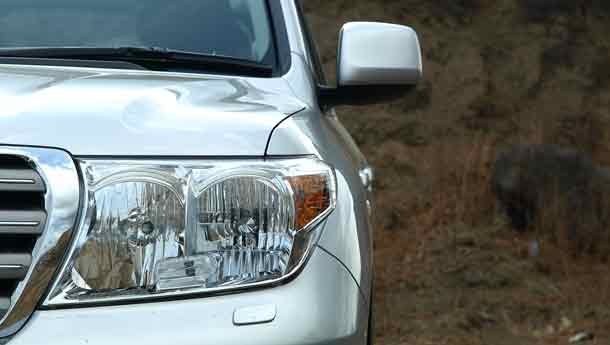 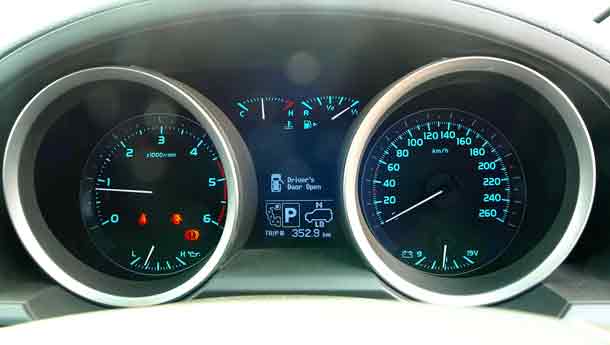 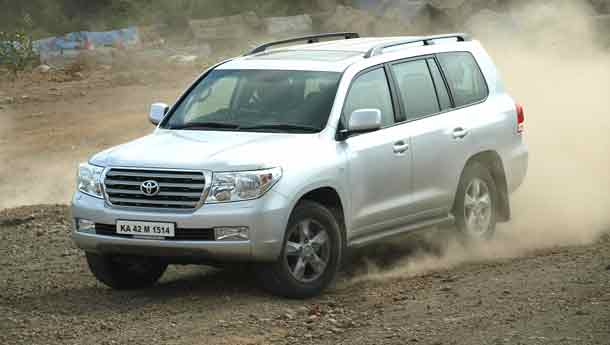 A couple of years back, I was in Dubai for the launch of a mega-buck luxury SUV. It was a mega event too – accommodation at one of the peripheral hotels to the Burj, a desert camp with airconditioned tents and so on. The German carmaker in question was in no mood to leave any stone unturned as they unleashed their first ever SUV – a massive edifice in glass and metal with more creature comforts than a well-appointed home. The desert camp had around 20 cars for scribes to get a taste of dune-bashing and helping us were guides-cum-drivers who do desert bashing for a living. So after a day spent going sideways, rear ways and generally slithering about and amusing myself a great deal in an abyss of golden sand, I asked my guide whether he was impressed by the new machine. He gave me a neat Rothmans stained smile and said ‘Noth as gooth as that...’ My eyes followed his finger and there, behind the tent, hidden away from the limelight was an off-white Toyota Land Cruiser. The machine that he takes to the dunes everyday to earn a living providing thrills to tourists. I will not be surprised if Arab courts offer an option of swearing upon a Land Cruiser if they can’t find a copy of the Holy Book handy.

A nice story to kick-start the copy aside, the good news is that the new Land Cruiser is now available in India. The bad news is that it costs Rs 83 lakh. Toyota decided that there is enough of a market at the top where Audi Q7s, BMW X5s and Porsche Cayennes are making merry. And of course, a flagship SUV was a must to establish the SUV lineage of Toyota before the Rs 20 lakh Fortuner is unleashed. What needs to be seen is whether the Land Cruiser as a sub-brand will have the same pull in India that it enjoys in the Middle East. Sure, the brand is well established thanks to grey imports and the little sibling, the Prado, which Toyota has sold in India with relative success.

Driving it across the subcontinent would have been an ideal road-test; alas, we had the car for just two days. In that time, we drove it on highways and expressways and managed a decent off-road session with it too.

The design brief for the Land Cruiser, I am certain of this, was to create a very large SUV with no character line whatsoever. That way, it is every inch a Toyota. Look at each part – like the four-slatted grille, the headlamps that could substitute a lighthouse in stormy weather, the rear-view mirrors that ape elephant ears and the procession of windows – and you realise that this Toyota was a loyal student at the ‘form follows function’ school. There is nothing that you may want to call spectacular or fantastic about this car, but it does make a big, bold statement in a ‘big blunt instrument’ sort of way.   Interior

Fit and finish of a Lexus (as it is badged a Lexus in some markets), very good quality plastics and leather and best instrumentation this side of an Airbus make up the interior of the Land Cruiser. But it is all functional nevertheless. The touch screen really works, the power-seat adjustments provide the perfect perch, the wriggly gear lever is safe to use and steering controls are intuitive and so on. You do get three rows of seating but a group of six will be more comfortable rather than seven. Despite the sheer bulk of the car from outside, the interior (like in most SUVs) is not as spacious as you would like. The reason for this is optimum safety engineering. The Land Cruiser gets 10 airbags in total – you need to hide all of them somewhere, right? If you are the sort who gets impressed by numbers, then here goes – the four-zone aircon works its magic through 28 outlets. I bet you won’t find all those outlets in a lifetime of living with a Land Cruiser. And then there are the speakers – 14 JBL units provide theatre-like sound that goes into every inch of space available on the doors and panels. In short, the interior of the Land Cruiser is a very agreeable space to be in even if you are off to buy milk round the corner or trying to find that elusive left turn that would help you discover a Mayan ruin.

No compromise here. A monster V8 diesel mated to arguably the most advanced 4WD system and nothing else. No, you cannot order your Land Cruiser with a more modest V6 diesel or a smaller petrol engine – the mothership gets the mother of a powertrain, period. The 4461cc V8 is the first common-rail diesel developed by Toyota (many, including the Innova engine, followed) and is good for 282 bhp at 3600 rpm and 65 kgm of torque between 1600 and 2800 rpm – the torque curve is so flat that it actually resembles the Table-Top mountain at Cape Town.

All that safety tech has made the Land Cruiser weigh close to three tonnes (2,720 kg kerb!). Despite two turbochargers working overtime, the best run to 100 kph that we could manage was 11 seconds – quick enough for a getaway from Taliban forces that are on your tail on their pick-ups but not enough to outrun some of the modern petrol-powered SUVs from Europe. But this is indeed the most refined V8 diesel I have ever driven – period. And it can return 8-10 kpl if you drive carefully. All that torque is harnessed through a six-speed automatic gearbox and a full-time 4WD system with a limited slip differential (Torsen LSD) and more electronic assistance than a satellite guidance system.

On straight roads the power is split in an ideal 40:60 with more power going to rear wheels. When accelerating out of a corner this becomes 30:70 and while shedding speed into a corner it becomes 60:40. Up to 50 per cent of the power can go to the front wheels if the system recognises rear wheel slip on acceleration and it will send 70 per cent power to the rear wheels if the rear wheels slip on deceleration. Add to this a multi-terrain ABS system that monitors engine revs and speed to adjust to wheel-slippage whatever the surface the Land Cruiser is traversing and you get a nanny-package extraordinare. It basically translates to an idiot-proof car that can take you to the Mariana Trench and back if you have a proper snorkel system installed. Seriously, it is tough to unsettle the car – we tried our best to get the rear wheel to step out (with the stability control switched off) but sensors interfered every time the big machine started to slide around, with incessant beeping filling the cabin.

That said, I did miss the chance to have it my way – as in selecting two- or four-wheel drive mode when I wanted to. And yes, I do prefer little less electronic interference when I am off-roading. But goodies such as a crawl-control system which controls braking and acceleration pedal as it helps you er, crawl out of tricky situations and the hill-start assist are worth having... Though I doubt how many would actually use it to the potential.   Ride and handling

There is nothing that can match the Land Cruiser off-road but that is only half the story. What has improved leaps and bounds is the on-road behaviour of the Cruiser. Recognising the need for car-like driveability now offered by Euro-chic SUVs, Toyota engineers have worked hard to provide near perfect ride quality and safe dynamics. Changing lanes, braking hard and even powering into corners come easier with the new Land Cruiser. I would have preferred a meatier steering feel (this one is just like that of a Camry) with more measured feedback though. The suspension setup is made up of double wishbones up front and a four-link coil spring setup at the back. For better stability across all terrains, Toyota engineers have developed KDSS (Kinetic Dynamic Suspension System) that links the front and rear stabilisers using a hydraulic pressure system. This helps in suppressing body roll while driving on good, fast roads and ensures extreme wheel travel while attempting off-road tracks. As it stands it cannot match a BMW X6 when it comes to corner carving but a new set of low-profile shoes and a stiffer set of shocks can easily transform this all-rounder into a tarmac special.

A truly well-made car with the creature comforts of a Rolls-Royce and go-anywhere capability of a T-72 tank – what else do you want? Sure, it costs a bomb and still does not carry the aura of a famed star or interlocked rings. It may not have the lineage of a Porsche 911 but it inherits the bloodline of the venerable Hi-Lux pick-up which matters more in off-road circles. Like all expensive decisions, it is tough to rationalise the Land Cruiser. But if you have to choose one car to go around the world, you will be happy to know that a short drive from the above mentioned Mayan ruin, there will be someone who can repair a Toyota!