Straddling the market at both ends seems to be Toyota’s strategy for Indian market. While the world’s largest automobile manufacturer is currently studying the option of bringing small car brand Daihatsu into the Indian market its real focus is on the SUV market with products like the Crysta. 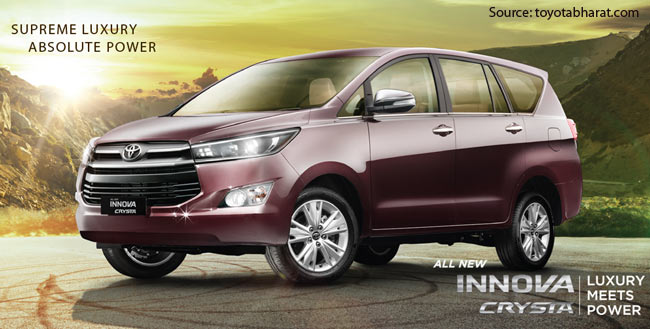 "Toyota is still studying the Daihatsu option but right now we are more interested in higher-end cars, which give a better margin,” said Vikram Kirloskar, vice-chairman, Toyota Kirloskar Motors (TKM). “We are not that concerned about market share because eventually cars like Crysta will become high volume models and as environment and safety norms get tougher, our investment in safety, emission and fuel efficiency will get us dividends."

TKM is currently a profitable company but is still far from optimum capacity utilisation with both the vehicle assembly plant as well as its engine and transmission unit Toyota Kirloskar Auto Parts (TKAP) running at below-optimum capacity.

"Rupee-wise we have a large market share but our volume spread is limited and we have a lot of extra capacity," says Kirloskar. "At TKAP we are at 65% capacity utilisation. Overall we are more than the 55% breakeven point," he added.

Although TKM has traditionally sourced transmission from its Thailand plant, Crysta will have made-in-India engine as well as transmission. The 2.4 and 2.8 litre GD diesel engine will be made in Bengaluru out of the 108,000 per year new capacity which TKM has put in place at the cost of Rs 1,100 crore.

"It will be great if we can make and sell 108,000 cars in India - the engine capacity is exclusively for the domestic market," said Kirloskar. "Crysta transmission will be made by TKAP in India," he added.

As volumes increase more and more critical components will be localised and right now volumes of around 110,000-120,000 make localisation viable, he added.