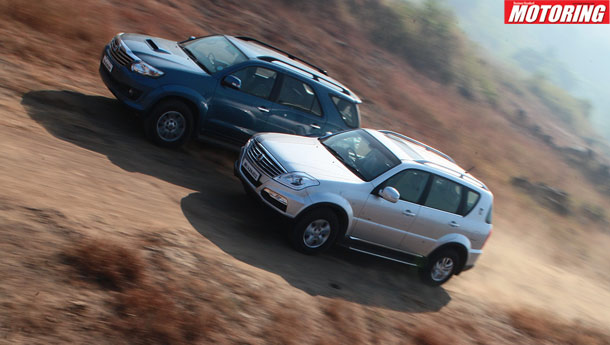 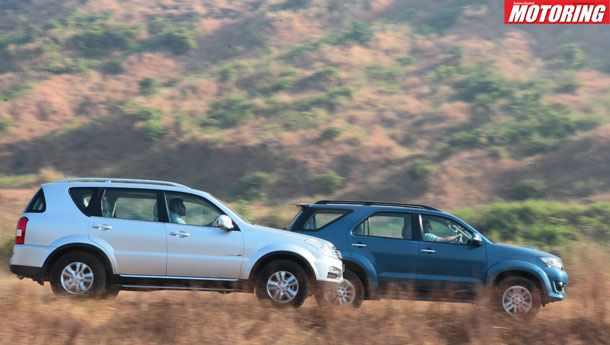 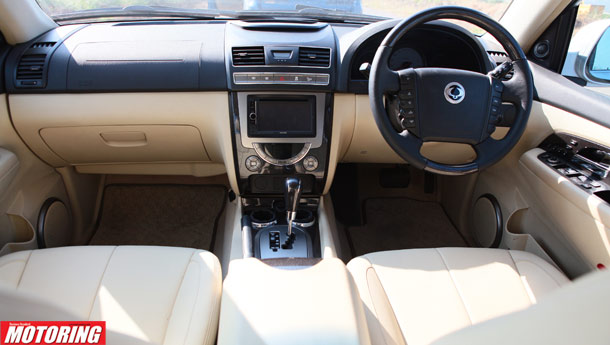 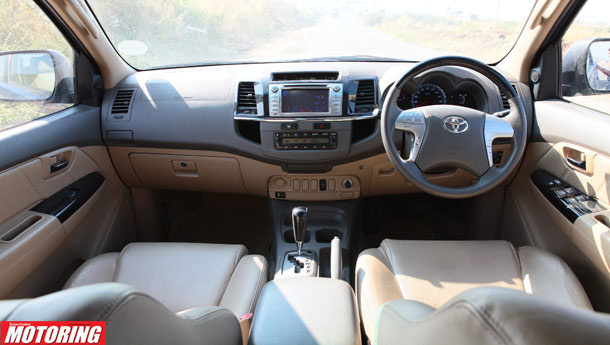 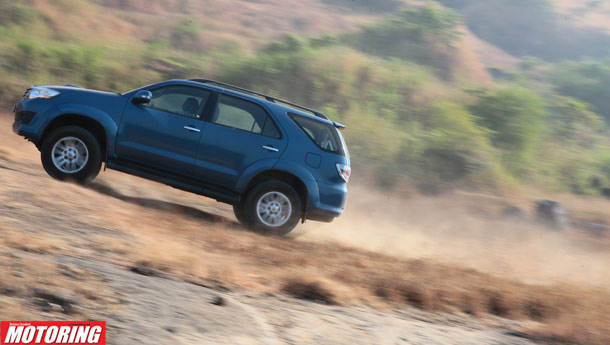 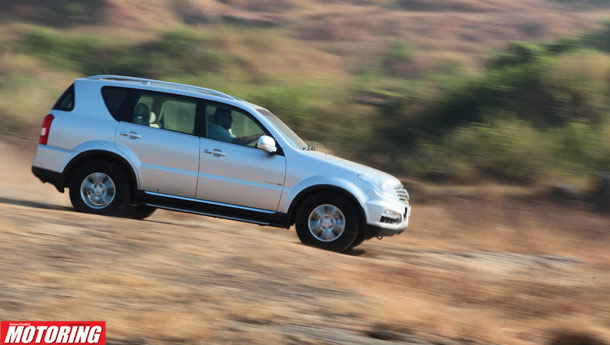 The day the Ssangyong Rexton was unveiled, it was obvious that this story just had to be done. Although this Head To Head was a no-brainer, the results threw up plenty of surprises. Read on to get the lowdown on who trounced whom and why!

Well, like the old hot rod adage goes, there’s no substitute to cubes. But surprise, surprise, that wisdom doesn’t really apply in this case. The Fortuner Automatic, launched nearly a year ago, retains the same 2982cc four-pot motor, with its 170 bhp and 34.98 kgm, from its manual transmission sibling. The Rexton, on the other hand, gets its jollies from an older Mercedes-Benz M-Class derived five-cylinder motor displacing 184 bhp and 40.9 kgm of torque from its 2696 cubes.

It becomes even more obvious when you rope in the weight of the two SUVs, or so it seems. The Fortuner AT tips the scales at 1,885 kg at the kerb, while the Rexton weighs in at 1986 kilos, the extra heft contributed by the Ssangyong’s all-wheel drive gear. But if you’ve quickly concluded that the Fortuner’s the rocket amongst the two, you’ve obviously forgotten about a crucial aspect called the ‘power-to-weight’ ratio. When you’ve got that factor dialled in, with the Rexton making  92 bhp per 1000 kg of weight, as compared to the Fortuner’s 90 bhp per tonne, it’s plain to see why in this department, the Rexton whacks the Fortuner clear out of the water. The numbers only confirm that, with the Ssangyong pegging a 0-60 kph run at 3.84 seconds, while the tonne comes in

at 9.66 seconds; compare this to the Toyota’s 4.32 secs and 10.35 secs respectively. Pinnacle velocities also differ substantially, of course. The Fortuner maxes out at 168 kph. The Rexton, however, smashes past, and attains its top whack at 174 kph.

Both SUVs could have pegged quicker times, had their automatic transmissions been a little faster on the upshift. The Rexton, however, appears to be a tad quicker on the shift, but it’s only by a minuscule amount. In terms of engine characteristics, I found the Rexton slightly quicker revving but unlike the Fortuner, the clatter does manage to creep into the cabin. It’s something that the potential Rexton owner just has to live with, a price to pay, it seems, for the extra grunt. Ting ting, the Rexton wins this one.

What numbers cannot describe, however, is how a car feels. Yes, that sensation that can only be evoked whilst behind the wheel. Plug the throttle and the Fortuner begins to dig in and then surges forward. Check your mirrors if the coast is clear, employ the respective indicators and voila, the high speed lane change is achieved just like that.

With the Rexton, sure, you might see the scenery move by more quickly, but it feels like a huge boat when you want to carry out sudden directional changes at three-digit speeds. On the go, the Rexton feels a bit mushy, especially when you’re squeezing it enthusiastically around corners. Over bad roads, the Rexton will absorb most of it, but if the pothole is really deep, the thing tends to thud in and out.

Ssangyong, it seems, has engineered the Rexton to be as ‘effortless’ as possible. All controls are feather-light and that, unfortunately, includes the steering wheel as well. The wheel requires next to no effort to turn this way and that, and as a consequence comes off as feeling very limp. This isn’t a good thing really, especially when you’re going hell for leather around a mountain road. Perhaps manufacturer surveys reveal that the customer’s demand for a vehicle that isn’t tiresome to drive translates to a four-wheeler devoid of any feedback or sensory stimulation. On the other hand, I actually want that steering wheel to feel like it’s connected to the front wheels at the other end. I want it to tell me what kind of surface those wheels are rolling over.

The Fortuner feels a bit on the harder side and instils immense confidence in the driver when the pedal is to the metal. The steering wheel, thankfully, is nice and taut in comparison to the Rexton, and that in itself will coax you to push that much harder. I only hope that Toyota doesn’t bow down to consumer market surveys on this one!

In all, the Fortuner feels tighter than the Rexton and hence, this bout goes to the Toyota.

If you’re led blindfolded into the Fortuner, and then the blind was removed, you’d be forgiven for believing that you’ve been kidnapped and pulled into an Innova – the interiors are actually that similar. In retrospect, it’s no surprise really, since the Fortuner and the Innova are based on the same ‘IMV’ platform. The HVAC controls, with the radioactive green backlit LED display, now feel really old, and the acres of bland dashboard will put a hyperactive kid to sleep. It’s not ugly or distasteful, it’s just that Toyota needs to spruce it up to make it more current.

The Rexton interiors, on the flip side, look like they’ve come off a South Korean carnival! There’s bling everywhere, faux wood accents, brushed aluminium borders and chrome highlights splattered everywhere like it’s going out of fashion. There’s enough stuff happening out here to keep it from getting monotonous. I quite liked the way the Rexton looked on the inside, it feels new and it feels young and it’s definitely energetic.

There’s no doubt about it, the Rexton is clearly the winner in this round.

Okay, since this one is very subjective, it’s best to declare it a draw. Some might like the butch, no-nonsense look of the Fortuner, but others might like the more substantial silhouette of the Rexton. I, for one, belong to the latter camp. I dig the way the inverted  D-pillar holds the wraparound rear windscreen. The semi-floating roof too is an attractive styling cue. Quite eye catching, in my opinion. Besides, the menacing and lord-of-the-road look of the Fortuner is one of the many reasons that we Indians love it. Its rugged stance and imposing presence makes it stand out. So a draw it is.

Brakes are as important as acceleration and fuel efficiency. In fact, the brakes need to mirror the vehicle’s performance – they should be at least competent enough to stop a car as quickly as it can accelerate.

When it comes to the stoppers, both SUVs will stop soon enough to keep the driver  from getting into hairy situations. However, dabbing on the brake pedal of the Rexton at first does not appear to do anything. Then, beyond a certain point, the brakes suddenly operate at their full capacity. The brakes are far from progressive on the Ssangyong and you need to get to know them better to use them properly. The Fortuner’s brakes begin to bite almost the instant your foot reaches the pedal. The pedal and the brakes feel linked to each other, with only the slightest increment in pressure of the foot immediately increasing the braking effect on the wheels.

The brakes on the Toyota felt reassuring and linear and that is why the Fortuner wins in this department.

What good is owning an SUV if you don’t take it off the road? Besides, it’s damn good fun too! So whilst scouting around for a good road to put the two barges through their paces, we spied a little beaten track which called for some exploring. Now, driving on a bad goat track that has never seen a road roller or tarmac tells you a lot about how well a vehicle is put together. It’s hard to hide badly engineered joints between panels when the whole car is being jolted and twisted this way and that over undulations.

The Rexton loaned to us by Mahindra had covered about 2,000-odd kilometres. Despite being practically brand new, creaks and rattles from the rear end had begun to seep into the Ssangyong, especially from the rear. A quick check, to be certain, confirmed that all seats were locked down properly as the manufacturer had intended. The Fortuner, however, despite more than 10,000 km under its belt, simply bounced and boinked across, with not even the faintest of a creak to be heard. That’s quite commendable, really.

The Toyota feels better built and when compared to the Rexton, it appears the Fortuner benefits from the famed Japanese genetic trait of longevity.

With the Fortuner’s ex-showroom price tag pegged at Rs 23 lakh, around a whopping Rs 3 lakh more than the Rexton’s Rs 19.67 lakh, the Toyota’s asking price looks pretty steep. The Rexton, despite costing substantially less than the Fortuner, offers you all-wheel drive, more power along with more current features like driver seat memory and everything else they could load it up with.

It may make the Toyota seem overpriced but the fact remains that the Fortuner is a tried-and-tested product and has shown itself to be robust enough to handle taxing Indian conditions. Though the Rexton still has to prove itself in the market, to me, the Toyota is the overall winner. But I’ll say this, that’s only because it feels better put together, is more solidly engineered and is ready to take a whole lot of abuse for years to come. But Toyota better get its act together and spruce up the Fortuner to offer better bang for the buck, for the competition is not going to make its life easy.