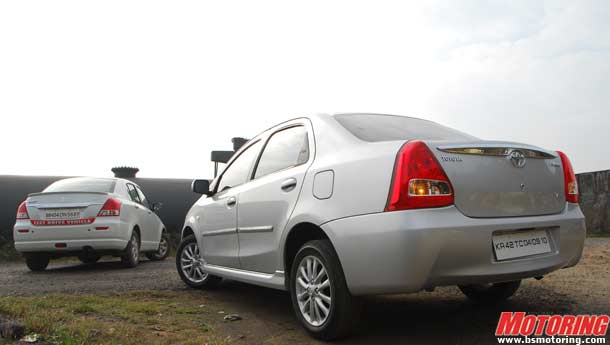 With over 21,000 bookings for Toyota Motor Corporation’s Etios sedan in over one-and-a-half months of its launch, industry observers see a realignment of market share in the entry-level sedan segment. The car, being delivered to customers from December, 2010, has a waiting period of seven months — the highest in this category.

Maruti Suzuki DZire, which has a waiting period of two to three months, accounts for one out of every two cars sold in the entry-level sedan segment (A3-), saw sales slide by around 1,000 units last month. Tata Motors, which straddles the space with the Indigo range, also saw sales dip to 5,234 units in December. This is the lowest sales figure that the company has registered for the Indigo range in 2010.


Maruti, on an average, sells 9,000-9,500 Dzire units and another 1,800-2,300 units of SX4 in the mid-size segment (A3) on a monthly basis. In December, the company’s sales in the A3 segment fell to 9,362 units, compared with the 11,115 units that Maruti Suzuki India Limited (MSIL) had sold a month earlier. A senior company executive, however, attributed the fall to constraints in production capacity. “We sell as many Dzire units as we produce. There is a waiting list on the product. Even this month, the bookings for Dzire have been good.” The waiting period for the DZire is around 2-3 months.

An industry expert said, “With Toyota coming in, competition is bound to heat up in the space. Toyota has a good brand image in the country. Etios is an aspirational product. It is expected to sell well in India.”

Toyota Etios, which is priced between Rs4.96 lakh and Rs6.86 lakh, was launched in December last year. The company developed the Etios platform exclusively for the Indian market where it hopes to double sales to 140,000 units in the course of this year. The Etios is pitted against the likes of Maruti Suzuki DZire, Hyundai Accent, Tata Indigo and Mahindra Logan. Around 18700 cars are sold in the A3- category every month.

According to reports, the country’s largest car manufacturer is working on introducing a shorter version of sedan DZire to cash in on cuts in excise duty. Frost & Sullivan Senior Director (automotive practice) V C Ramakrishnan added, “Till now, there have largely been two volume players in the A3-segment. Now with Toyota coming in, we would definitely see a realignment of market shares in the category.”

Pricewaterhouse Coopers Leader (automotive practice) Abdul Majeed said, “Usually, when the waiting period is more, bookings slide. We have to see how the car does over the next three months.”

According to government regulations, a small car (less than four metres in length) is liable to an excise duty of 10 per cent, compared to the 22 per cent duty levied on larger cars.

By making the DZire smaller, MSIL would be able to avail of benefits in excise duty and also price the DZire aggressively.