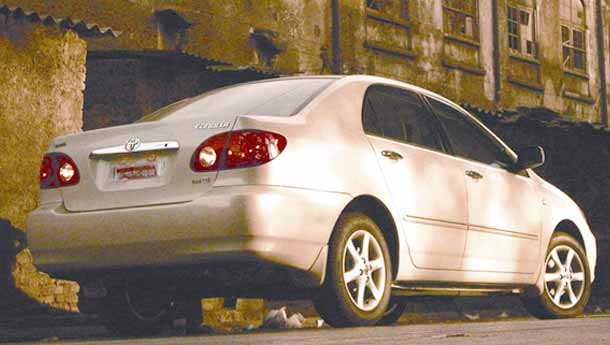 By the time you read this, the war will be over, but it could have happened. Gulf War II goes into its third month. Walker Bush is broke after spending US$ 74 billion to smoke out Saddam. India has refused aid to the US. Blair takes revenge for all the friendly fire and his Tornados start firing at F-16s and every bird in Iraqi airspace.

Patriot missiles accidentally target American aircraft carriers. And the Marines discover that the only weapon of mass destruction Saddam had has given them the loosies. As a last resort, Bush decides to nuke Iraq, presses the button – and nothing happens – eco-friendly Indians working at Silicon Valley have hacked into the Pentagon and successfully hung all the computers there. Putin smells his chance and trains his old nukes on the US and says hands up! Bingo, Russia rules the world.

Seriously, it could happen. Then someone would make Das Kapital the written constitution for the world and that would mean that there cannot be 35 car companies making 3,500 models. One brand of bread, one brand of butter, one brand of vodka... and of course, only one brand of car. The Russians would want to choose one amongst the 3,500 cars built around the world so that they could rebadge it a Lada and give birth to a 25-year waiting list. Then it’d better be a car that would meet all the demands of a capitalist hangover, right? It’d better be good-looking, bigger, spacious, more powerful and more comfortable than the last Lada.

Now comes the question, would it be a Mercedes C-Class? Naw, looks too German. Would it be a Ford F-150? Naw, it’s very Bush. An Ambassador? Naw, too technically advanced. The Toyota Corolla? Brilliant, now we are talking – a car that is cheap to build,not so cheap to buy, cheap to run, not so cheap overall. The purrfect car to wear thenew Lada badge. Better still, they can make it at Osaka, Bangkok, Bangalore, Warsaw, New Orleans and St Petersburg.

The Toyota Corolla 1.8 Automatic, to be precise. I have been driving one for the past one week and I have to say there is nothing else in this universe that is manmade and yet so perfect. Jumbo jets, Concordes, Skylab and the Space Shuttle were great American inventions, but all of them were expensive to buy and run, and have crash-landed at least once – hence they cannot be heralded as capitalist toys that can represent the progress mankind has made. That honour goes to this Japanese invention on four wheels that does not explode to life at the turn of the key but takes you to the milkman round the corner or a few laps around the globe without breaking down. And it is not a new invention – some 26 different Corollas have been built around the same philosophy and even Toyota probably does not know how many countries they sell it in and in what shape.

I, for one, think the new Thai-based, Indian-built Corolla has a reasonably good shape. It appeals to almost every human being, unless he or she bought a Mercedes-Benz worth a few million rupees before the budget concessions. Since the obvious competition to the future Lada has to be done with other cars, let us compare it with everything automotive.

In India, you can buy the cheapest and one of the most expensive cars made in the world at the same time – the Maruti 800 and the Mercedes S-Class. The Corolla Automatic is bigger than the 800 and smaller than the S-Class. While driving an M-800 means you are relegated to the have-nots Marx never got down to explaining properly, driving the S-Class means being labelled a fool who has no value for hard-earned/inherited income. Now see the logic? Driving the Corolla means you have elevated yourselves from the canned tuna days to prawns but it also means you have suppressed your desire for that big fat lobster.

Leather traders from Pakistan will be happy. Once the new-age Lada Corolla is made, they will have all the skin to source hide from the cheapest parts of the world-child labour would hardly bother them. At least the Corolla Automatic that I was driving was full of the stuff, beautifully stitched at that. There was some fake wood which didn’t pretend to be wood – expect the Russians to source the real thing from the Brazilian tropical rain forests. The seats are large and comfortable enough for 40-year old burger-kings and cheese-queens from around the world. Instrumentation is more comprehensive than in a Soyuz control room and even tells you external temperature if you are worried about your re-entry. No plebeian controls for air-conditioning – instead, a few buttons will help you maintain a  temperature that your left brain likes. Lots of nice touches too, like rear-view mirrors that fold at the touch of a button, power windows all round and a music system that can make even Anna Kournikova sound good. No complex screens and ‘I-me-u’-drive systems that can make the average Russian feel inferior and technically challenged. Nothing Trabant-silly or Maybach-opulent.

So the perception and comfort is taken care of. How about the drive? Russians will have to induct Mir’s service engineers to understand how the VVT-i engine of the Corolla works, but once they do that, they will learn enough to put Gagarin’s great-grandson on the surface of the Moon. Really, the Corolla Automatic drives by itself... well, almost. While most Lada literature lied when it came to output figures, the
Corolla produces an honest 110 bhp from a 1794 CC engine. Yes, many comrades would think 16 valves are too many and that the comp-controlled fuel injection system is fit only for a Sukhoi, but they will be floored by the performance too. No Lada did 60 kph in 4.74 seconds and 100 kph in 11.15 seconds. Mind you, that was the performance envelope of small Ferraris about 15 years ago. The Corolla Automatic will out-drag an AN-32 and even approach its take-off speed of 195 kph given a runway. Isn’t it a shame that the Japanese were not allowed to make planes after WW II? Then you, I and Putin would have been flying to work today.

And you wouldn’t have needed a private pilot’s license to do that, going by the way power is transmitted by the sublime four-speed automatic box. The Russians never produced a Formula One champion, so let’s assume that they are not going to cry foul for want of a macho manual transmission. Did someone say fuel consumption? Even without having to re-capture all the half-burnt Iraqi oil-wells from the US, the Corolla would put the world on the roads all over again. Questioning the myth that automatics are guzzlers is easier than questioning Bush Jr’s intelligence, thanks to the 10 kpl that the Corolla returns – whether you drive at 80 kph or 180 kph. Alright, it may become 9 kpl if you keep it pinned at three-digit speeds until the sun rises in Siberia.

I have to admit that it has no quirks, which, translated in an enthusiast’s tongue means it is a tad boring. I even slept behind the wheel while stuck at a traffic jam and needed coaxing from fellow passengers to move on. Honestly, the handling of this car is very neutral, like India’s stand on the Gulf War. Neither here nor there. Safe is another good word to use too. The Corolla with its twin-airbags would be a more secure place than the bunkers of the Republican Guard, though the Russians would insist on ABS which the Indian Corolla does not come equipped with.

So there you have it. All the car you would need in a post-Bush era. It’s the right size, it’s reliable, it’s quick, it’s fast, it’s easy to drive, it goes around corners well and it is quite economical. For now it costs close to Rs 11 lakh to buy one and run it on Indian roads, but then the Gulf War has not yet ended as we go
to press.

Not bad, the Corolla Automatic does fit the concept of one world, one car. Maybe Mr Marx had all the right answers to our problems, cars or otherwise, in those three volumes of his.

WHAT?
Toyota Corolla 1.8 Automatic
WHEN?
May 2003
HOW?
Param placed the car next to a disused mill wall, right in front of a slum and tricked the digicam into taking some unbelievably brilliant sepia tone pictures. And Bijoy was stuck with having to write about a car that was good at everything it did – well, how excited can you get about a Corolla automatic? But the search for WMDs, the war on Iraq, Dubya and Russia’s role in the new world order came to the rescue.
WHY?
Somehow the story, the photographs and the ‘Photoshopped’ visuals all came together to elevate the story about a humdrum Toyota sedan into a comment on contemporary world affairs.
WHAT WE THINK OF IT NOW
‘Admitted, it was and still is tough to find enough cars every month to fill an issue... hope things change soon’.
— Bijoy