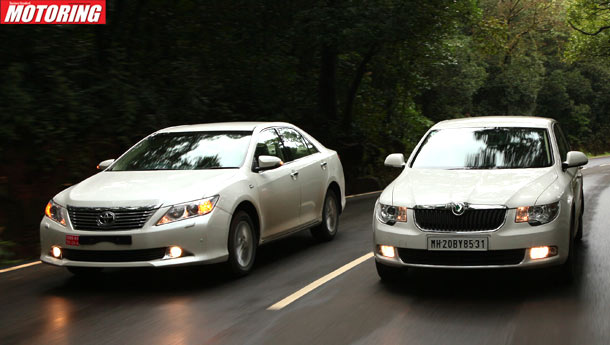 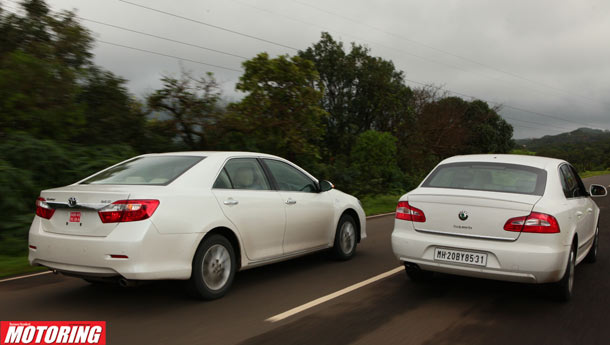 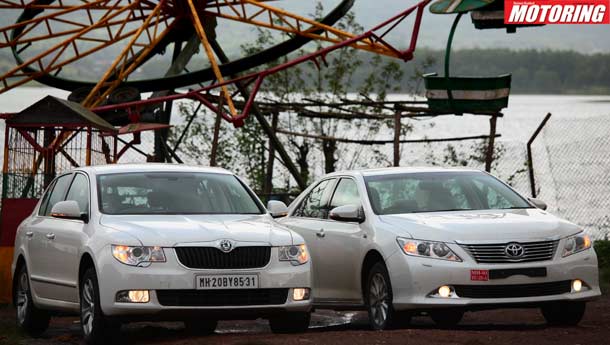 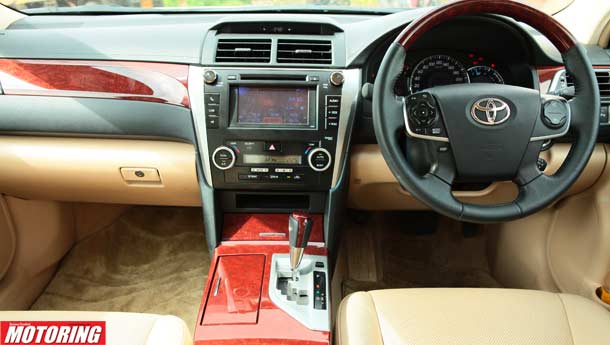 We had a couple of luxo-barges to test, so ideally we should have taken them to Nariman Point to check out their business-like aspects. But that’s not what you’d expect us to do, right? So we took them to some of the best hill roads around to see how well they go around corners. The fresh tarmac was nearly ripped off its roots by the sheer weight of these two behemoths. Well, not exactly, though it felt quite dramatic to say that. For starters, these two cars aren’t

all that heavy to begin with and surprisingly, they aren’t the boats they used to be, either. But we came back with an answer to this tricky question: can the petrol Superb fend off the challenge from the new, rejuvenated Toyota Camry?

Which one should you take up a mountain road?

The Superb, of course! You may have heard about cars that shrink around you as you drive. Well, despite its dimensions, the Superb is one of them. Plonk yourself into the driver’s seat and set off and I guarantee you, you won’t feel like you’re driving something that’s nearly 16 feet long! The steering wheel tightens very nicely as the speeds build up and you’ll be in for a real treat. Mind you, you won’t be beating smaller sedans around the bends, but you know what, it comes really close. The Camry, on the other hand, doesn’t inspire as much confidence and the steering wheel remains light even as the speeds rise, but that’s expected. The Camry is isolated to an extent from the driving experience as opposed to the Skoda. The Toyota is all about the ride quality and that means the dynamics, er, take the back seat.

In terms of engine performance as well, the Skoda has a slight edge, on the butt-dyno, at least. There is some initial lag, but once on the move, the DSG keeps the motor on the boil to keep you pinned in your seat. The 1.8-litre turbo-petrol engine under the hood of the Superb was originally designed by Audi and is one of the most widely used engines in the VAG group. It’s a well proven performer and since its been in production for so long, parts are aplenty and you can be sure it’s going to be reliable too. The 2.5-litre unit in the Camry isn’t nearly as exciting to drive, but there is something to be said about its refinement and smooth power delivery. And then, of course, is the fact that it will be reliable to the T.

Okay, for all your cornering action, the Superb is the one to go for, but seriously, who’d want to do something like that with these cars, other than yours truly? But what happens when the roads straighten up?In a straight-line drag, the Camry gets a jump on the Superb off the line thanks to some turbo lag on the Superb. It hits 60 kph in 3.8 seconds, compared to the Superb’s 4.2 seconds, and this gap more or less remains the same till the tonne is reached, with the Camry clocking an 8.56 second time compared to 8.81 seconds for the Superb. Surprised? Don’t be. The Camry makes more power than the Superb and is lighter too, so despite the DSG shifting quicker, the Camry still has the edge. Even when you’re not going all out, when puttering around town, the Camry is the more comfortable one to be in. The entire drivetrain works in complete silence, leaving you to do all the relaxing in the back seat. And this is one of its finest attributes – experiencing it is believing.

Which one pampers you the most?

As you enter the Toyota, everything of importance is either swathed in leather or wood (faux wood, in this case) and the light colours and wood tones really set the mood of the interior. The colour of the wood trim and the layout of the dash however, don’t look like they belong in a luxo-barge, but from where the owner will be sitting, there is nothing to complain about at all. The rear bench is plush and comfortable, with the suspension taking care of everything else. The Superb is not quite as plush as the Camry, but if you settle into the driver’s seat every now and then, you will be willing to forgive that. It is more understated and sober compared to the Japanese car.

On the features front, they’re about evenly matched. Both have electronic everything... auto wipers, headlamps, power seats and the list goes on. The Camry gets Bluetooth capabilities on the stereo while the Superb gets a memory driver’s seat. Neither comes with seat heaters or coolers, but the perforated leather seats are comfortable enough, so we’re not complaining. There’s one glaring omission in the Camry though. For a car that’s targeted at the rear seat passenger, the Camry should have offered airbags for the rear seat passenger.

Which one turns heads even at Nariman Point?

The Camry is definitely the head-turner in this duo. With its sharp lines and liberal use of chrome, it’s got all the elements needed to catch the eye. Its size and bling give it a presence that’s simply unmatched by the Superb. It doesn’t help that the Superb has been around for three years now, and has become somewhat commonplace these days.

Which should you go for, then?

The Camry has one thing going for it, and that is, well, it’s a Camry. It’s basically the gold standard for luxo-barges the world over and there exists a group of people who will buy it without even considering the Superb. It won’t matter to them that a diesel Superb would work out cheaper than the Camry. They just want a Camry and nothing else will do.

For the others though, it’s still a tough decision. For one, the price difference is quite significant. The Camry is brought in as kits from Thailand and assembled here, yet it comes with a higher price tag than the Superb. How high? How does a difference of ` 2 lakh sound? In fact, for the price of the petrol Camry, you can get yourself a base model diesel Superb with some change to spare. Now that definitely turns the tide in favour of the Superb, no?

Wait, not yet. The Superb will do everything you need it to. It may not turn as many heads (there is a facelift coming soon enough), but it will do most things just as well as the Camry and will work out cheaper to boot. Plus it is a more engaging car to drive despite the Camry being quicker and faster. So that makes it the winner in this product-to-product comparison. But a small caveat. Can it beat Toyota in the ownership experience? Well, that calls for a different sort of comparison test!