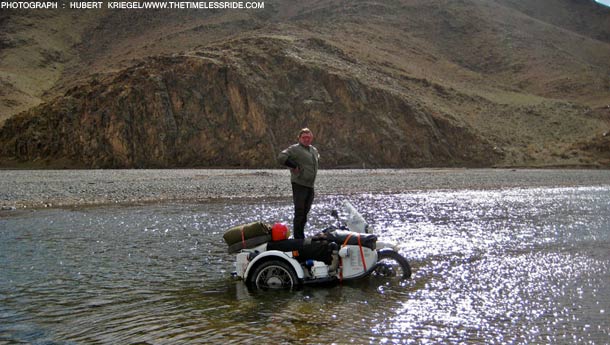 Yes, besides my almost unhealthy obsession with Russian military equipment, I cannot resist drooling over almost anything thing Russian, including Maria Sharapova, but this blog isn't about her. What it is about is the Ural motorcycle, a motorcycle that’s hard to not fall in love with. The Ural is more currywurst than beef stroganov, at least at birth. After Hitler demolished Poland with the Blitzkrieg way back during WW2, Stalin basically ordered his troops to go find a bloody motorcycle that works in the extreme lands that surround them, so they went back to their garage to think and have some vodka, which is when they spotted a few BMW R71s lying around, motorcycles the Nazis had kindly gifted them after the earlier non-aggression treaty. Now, it was only too tempting for them to ignore the sidecar-equipped German motorcycle lying around, so they took a swig of Vodka, sourced more through other channels and started reverse-engineering it to create the M72 sidecar. The Russians were afraid that the lightning-fast German offensives would demolish their factories so they shifted base to the remote Ural mountains, thus the name ‘URAL’.

Urals have gone beyond army purposes since then, made over 3.1 million motorcycles and they’ve sold them around the world. Unlike any of the modern, 14,000 RPM meteors that get lighter, faster and stronger each year (at least that’s what they claim), the Ural has fundamentally remained kosher all these years later. Thankfully, the parts where upgrades were critical have been replaced, like the brakes which are now Brembos, electricals which are provided by Denso, suspension by either Sachs or Paioli, ignition by Ducati Energia  (no less) along with less obvious-to-the-eye parts like better materials, alloys and engineering techniques. The engine design that came from BMW’s trademark boxer twin configuration displaces 750cc in an air-cooled configuration and is coupled to a four-speed tranny that comes with a reverse gear as well. Of course, the fantastic looking sidecar earns its place of pride besides the motorcycle, adding to the practicality.

Having been run for decades in the extreme environments of the Soviet motherland, I wouldn’t doubt the reliability or ruggedness one bit – after all, if there’s one thing the Russians can do properly, it’s to make things run, simply and effectively, if a bit crudely. These are hardy bikes made for a hardy country with hardy people. If you ask me what my dream ride would be (money no bar), I wouldn’t wait a second to tell you that it would be touring across lands remote and exotic, unforgettable places like Mongolia, Russia, Kazagasthan, Turkey and then maybe head to South America and do a bit of Africa as well on the Ural. A similar full-of-character motorcycle would do the job as well, but the Ural gets first preference since its coming from beloved Russia. I do know that this whole plan is more than a bit dreamy and that it’ll probably take me years to even start to think about planning it, but hey, what’s the harm? After all, it all starts with a dream, doesn’t it?

Hubert Kriegel, a proper ‘dude’ if ever there was one, is already doing it for the last eight years, traveling across the world on his Ural sidecar. I highly recommend his blog but before that, be warned, there might be no going back. https://www.thetimelessride.com)