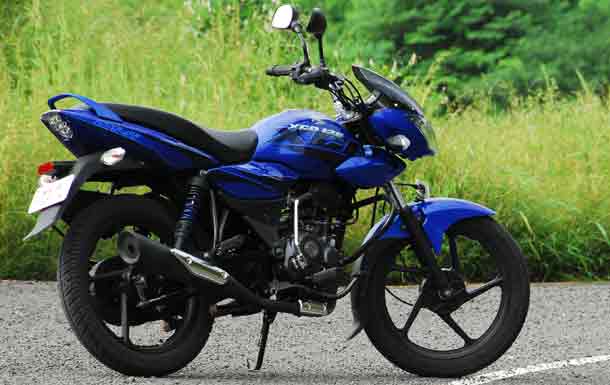 Perhaps the most impressive thing about the XCD 125 is that feels like a genuine 125cc-class motorcycle. It offers similar power, great low-rev response, sports all the kit and is also easy on the eye. I can imagine replacing a Disco with the XCD and enjoying lower revs, less effort for the same sort of ride about town. Perhaps the only the thing I'd miss is the Disco's top-end. You see, the XCD's power peaks at 7000 rpm, early by 125cc standards and a good 1.5 bhp under the Disco too.

Still, that's the beauty of the proposition. The feature-rich, slick XCD is not aimed at the Super Splendor-Glamour-Gladiator-Discover set. In fact, the gunner's been lowering the sights until they're locked in on the Platina-Splendor-Victor-Star playing field. What Bajaj, effectively, have pulled off, is selling a genuine 125cc motorcycle for just-over 100cc prices, with greater economy and features that we've so far seen only in the 150cc class or above.

The XCD looks sleek and mean, which is unlike what its competition offers. I am talking about a fairly upmarket looking motorcycle, built to compete against more normal looking ones like the Splendor or the CT100, or come to think of it, the Suzuki Heat. The stickers look classy – done with help from Kawasaki, the tank extensions are, um, an extension of the Pulsar 200's equivalents, the fairing looks mean (I thought it had faint Prowler and Discover cues). The side-panels are quite similar to the Discos, and the sleek tail-end is very Pulsar-like, except for the shaped LED tail lamp.On the move, the standard electric start wakes up a normal sounding Bajaj motor, which can really work at low revs. Progress is brisk by 100cc standards and I am certain that many 9.5 bhp-125cc motorcycles will find it hard to match the 112 kg XCD up to 60 kph. Gears slot in neatly and overall, the motorcycle feels solid. Ride quality is quite good, as we've come to expect from Bajaj's recent models and overall, I'd say they've done a bang up job.

The Rs 41,000 ex-showroom XCD is priced between the Platina and the Discover and fills a major hole in the Bajaj line-up. Ensuring that upgrading customers don't lose out on the all-precious fuel economy, Bajaj is enticing upgraders with a ton of features – LED tail lamps, standard electric start, alloys, digi-dash and so forth. And for the money, this is a lot of motorcycle. The XCD may pull sales from the Platina or from the Discover, but that's a cannibalisation scenario Bajaj says it is comfortable with. With 20,000 XCDs already being made a month, and the 50,000 unit level expected to be reached in short order, BAL is expecting the XCD to prove extremely popular. Bajaj also said that DTS-Si is a flexible platform that will be able to handle higher and lower displacements, although there was no specific plan for the same at the moment.

Bajaj's new DTS-Si engine is an evolution of DTSi. The new engine is designed to provide maximum possible economy, with Bajaj engineers having worked on the swirl aspect of the engine. When the mixture of air and fuel enters a combustion chamber, the charge has to mix well to create a good burn, essential for maximum efficiency and performance. One way to ensure that the mixture is homogeneous is to create turbulence, which is an end result of swirl. To create this effect, the engine uses two spark plugs as usual, but the valves, which are usually diametrically across from each other, have been offset. Thus the mixture enters from one side of the chamber and proceeds to swirl around the chamber. As the swirl decays, or the motion dissipates, it creates a more random motion which is great for burning.

In effect, the Bajaj almost-square 125cc DTS-Si engine manages to produce 9.5 bhp, which is more than all of the 100cc motorcycles on sale today (and at least as much as other 125s). There is also a torque benefit. Bajaj say low engine speed torque is up 35 per cent on the Platina, and it actually peaks at just over 1 kgm, which is quite significant. And of course, the entry-level motorcycle is all about fuel efficiency and Bajaj claim 109 kpl under standard test conditions, which is 1 kpl more than the economical Platina. In addition, Bajaj have ensured that the new engine has far less friction than the motors that have come before it, and is lighter than the 100cc Platina engine as well. Playing its part in this mix is a new ECU. In effect a powerful CDI system, the new unit handles the choke and has a temperature sensor to vary ignition curves depending on the engine running temperature, in addition to the usual throttle position sensor driven load-based ignition maps. The ECU will also fire both plugs independently for best results.

Discover or XCD 125?
The Discover is the bike with a stronger response at higher revs. So if you're riding fast for  significant stretches, the choice is still the Disco. In town? The XCD will be less work

Splendor or the XCD 125?
XCD, definitely. There is no parameter where the Splendor will be able to one-up the XCD. None. Okay, maybe resale value, but the XCD is too new to go down that road yet

Is this the Sonic?
No, the Sonic is still waiting in the wings. While many people still remember that yellow streak from the Auto Expo, BAL is yet to confirm a launch schedule

To read the full road test of the Bajaj XCD 125,read our November 2007 issue.