'To get the right product is one of the key goals' - Sudhir Rao, Managing Director, Skoda India

Recent launch of Skoda Superb into the Indian market has meant that currently in the D plus segment there are no real competitors since the Honda Accord and Volkswagen Passat are no longer available for sale in the country until their improvised or new editions are launched towards the later part of this year. CarDekho in a candid conversation with Sudhir Rao - Managing Director, Skoda India talk about various aspects concerning the Czech manufacturer and their plans for India as a whole. 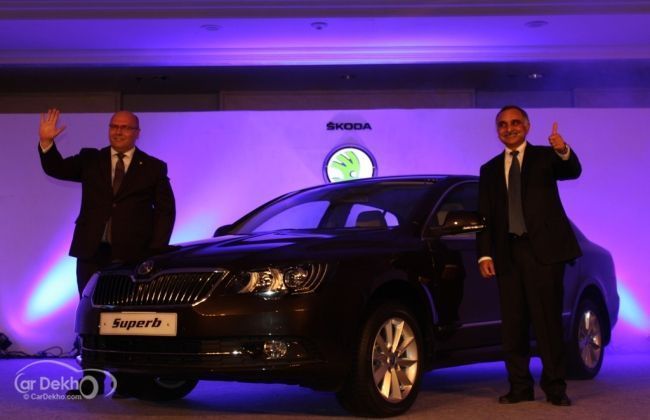 Tracing the companies track record in relation to sales, Sudhir mentions that the Indian arm sold as many as 22,700 units last year in comparison to 25,000 vehicles in the year 2012. He also agreed that the prime reason for decline in sales in the saloon segment especially in the case of Rapid has been due shift from sedans to SUV's. From the companies perspective, he mentioned that the year 2013 was all about making the business healthy wherein a couple of initiatives were taken such as consolidated service outfit (their Pune office was shifted to Mumbai) so as to have more workforce in the field. Special emphasis was laid on a 'structural approach towards after sales development' which has been an area of concern for the Czech manufacturer. Having said that, he claimed that 2014 is going to be the year wherein product planning and execution is going to take place. "We have a financially stable business plan" - which we believe is cost effective therefore moving ahead things are looking good for the company claimed Sudhir.

After sales services has been an area of concern for the premium automaker, therefore commenting on the issue Rao said, "both dealers and Skoda are improving". There is a collective will to improve the overall customer experience. He also retreated the fact that "to get the product right" is one of the key goals of Skoda as an automobile manufacturer. Skoda Rapid for example was recently given an upgrade in terms of the features it offered which has lead to 30 percent increase in sales. Initiatives of such kind wherein a feature rich product christened as 'limited editions' are definitely lucrative options for us as well as the end consumer as both parties benefit in terms of sales and goodies on board mentioned Sudhir.

Speaking about the recently launched Skoda Octavia, he said that the model currently has a 4 month waiting period on it. Its popularity is such that globally, the Octavia contributes to the maximum sales. From an Indian perspective it has received an unprecedented response explaining its gaining popularity claimed the top executive. Fabia was the only offering in the premium hatchback segment and its discontinuation last year meant that the Czech company was and is missing out on a key segment. Talking about that Rao said that the key lies in rectifying the segment before actually moving out to another. Therefore a newer version of the Fabia could be on the cards as the possibility of the Citigo coming to the Indian market would not be a reality due to its higher safety standards (NCAP Euro 5) which would not be cost effective considering that the vehicle could cost in excessive of 10 lakh rupees. Which would not go done too well with the Indian consumer as they price sensitive, said he.

On being asked about the 2014 edition of their flagship SUV- Yeti which was on exhibit at the Auto Expo, he said that the model would be introduced to the Indian market towards the second half of this year. It would Euro NCAP5 tested, therefore the positioning is still going to remain premium which indicates that the cost will still be in excess of 15 lakh rupees. With reference to the product, he mentioned that the Yeti is a heavily un-communicated product but still 50 percent of test drives are converted into sales. When asked about the number of units that the company is looking at selling of this SUV, the reply was that it is not going to be a mass selling vehicle. Therefore our target would be around 1000 units for this year.

As for the Sub 4 meter category which has been segment where majority of the action is being concentrated by the Industry as a whole, the Czech manufacturer is still mulling over its options. As per them, they are still working in multi directions specific to that of a Sub 4 meter SUV.

Source : CarDekho - "To get the right product is one of the key goals" - Sudhir Rao, Managing Director, Skoda India