A new pecking order has emerged in the country’s highly price-sensitive small car market. The Tiago, the two-year-old small car from Tata Motors’ stable, has notched the highest sales in the entry segment after Maruti Suzuki’s Alto.

In the run-up to second place, the Tiago has overtaken Renault Kwid and Hyundai Eon, which now have third and fourth positions, respectively.


The Siam (Society of Indian Automobile Manufacturers) data for the January-March period of 2018 shows that more than 23,100 Tiagos were sold.


While this is a small number when compared to the Alto’s nearly 62,200 units, growth posted by the Tiago is impressive.


These are sales from the company to its dealerships.


In the same period of 2018, the Alto (also the most sold car in India) has seen sales grow by just about 1 per cent on its high base. The Kwid, the sport utility vehicle-styled small car of French automaker Renault, has seen its sales slip by over 32 per cent to 17,517 units during the period.


Korean carmaker Hyundai’s small car Eon has also seen a decline of 7 per cent in volumes during the quarter. For the financial year 2017-18, however, the Kwid maintains second position with domestic sales of 83,089 units (in spite of a 24 per cent drop year-on-year).


Tata Motors sold 78,829 units of the Tiago during 2017-18, which means growth at more than 40 per cent over the previous year. That makes the Tiago one of the fastest-growing car brands in the country in the last year.


If the Tiago keeps growing at this rate in 2018-19, it may become the second-best seller in the segment for the entire year. The Kwid has not grown for several months but if it reverses the trend, there will be a close contest for second position.


Unlike its competitors — the Alto, Kwid, and Eon — the Tiago comes in a diesel variant also. 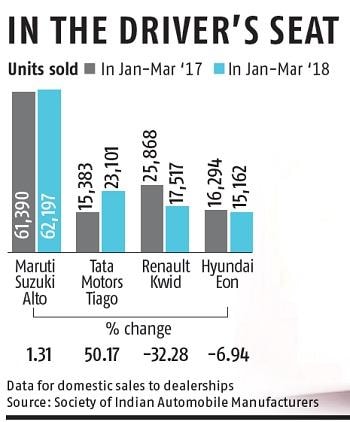 A Tata Motors spokesperson said design and infotainment were the key features of the Tiago. “This has led to an increased appeal among younger customers and increased the number of first-time car buyers considering Tata Motors. A strong focus on network expansion to improve our reach and improving after sales service also helped,” the spokesperson said.

Adding that the demand for the Tiago has been strong in both urban and rural markets, the spokesperson said this brand would continue to evolve as a strong offer in the mid-sized hatch segment and the company looks forward to a strong demand for it in this financial year too. Some, however, see stiff competition for the Tiago later this year when Hyundai launches its new small car.


Amit Kaushik, managing director for India at automobile consultancy firm Urban Science, said there had been no launches by top players in the entry car segment for many years now. “That helped both the Kwid and Tiago to put up a good performance. But the new small car from Hyundai will affect both these brands”.