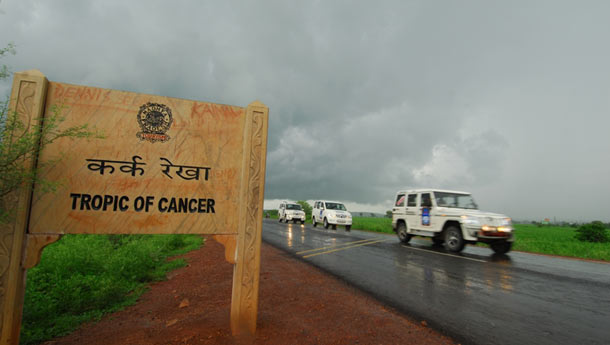 Fulfilling past promises can be difficult. Last year, as Kartik and me failed to get to Sanchi, en routeBhopal, failing light and all that, we promised each other that we'd be back here soon. Of course, it was easier said than done - Bhopal is a place on the map we'd rarely visit and Sanchi even more so. But as they say, never say never and we were in Sanchi, finally staring at the Stupas, laughing at each other for making a seemingly impossible promise possible.

Sanchi was our final destination for the day, this time with no failing light, swarms of holidaygoers and a feeling of Buddhism enveloping us once again. It's surprisingly beautiful, Sanchi, in ways that are hard to be explicit about. Come to think about it, the monument has inspired so many other facets that define India that beginning to talk about them would probably need more column centimetres of space.

The day began with all three vehicles, the Xylo, Bolero and Scorpio making their way through early morning traffic to Rajwada in Indore, a palace that seems to blend European and Indian styles - all in one. As the local guide pamphlet said, it's been burnt to the ground thrice in the two centuries it's existed. The first three storeys of this seven storey palace are made of stone, the rest in wood. It looks magnificent to say the least, a sign of the times when European invaders left their mark on Indian architecture.

A short hop to Lal Bagh palace, for another photo op and we were out of Indore, a city that like the rest of its compatriot cities is growing faster than one would like to believe. The other growth factor has been the roads. Traveling between Indore and Bhopal for instance is greeted by a four-laned dual carriageway that in one fell swoop has increased the average speed and reduced travel time by a huge margin. The Xylo and Scorpio were right in their element, while the Bolero played the job of catch up admirably.

All that meant we were in Sanchi in no time, had enough of them precious minutes to explore the place and truly see more in one day than we would otherwise have. And with our three trusted steeds doing sprinting along with no signs of weariness, it seems we might end up keeping more unfulfilled promises than even we could ever have imagined.

Finally ending the day in Bhopal, the Bolero led the pack into the City of Lakes as the Xylo and Scorpio calmly played along. Finding home in the warm confines of the Ivy Suites homestay facing the lake (fantastic environs, gorgeous view and excellent food; ivysuites.in) just made the end to a great day even better. Now begins the long journey back home...