The Vespa introduces some cheerful colours 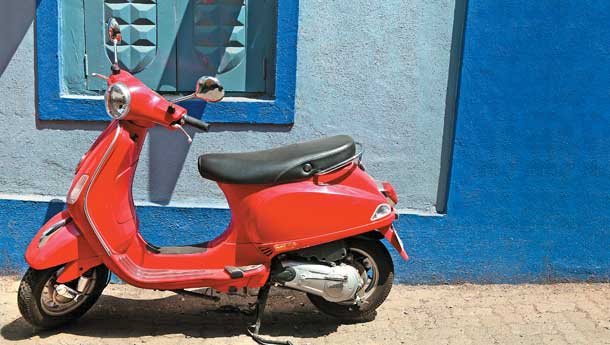 It’s funny, but despite the fact that the Vespa has been available here for quite a while now, and I’ve even shot it a couple of times, I’ve never ridden one – until now. I’ve wanted a scooter as a local runabout for a while, so when the Vespa came up and presented itself for the job, I was quick to snap it up. I went over to the Piaggio showroom in Bandra, Mumbai, and collected it (after some initial confusion about where exactly it was). The showroom, on a related note, is quite nicely set up, with a range of merchandise on display and reasonably cheerful staff.

The first thing I did after bringing it home was to almost take someone else’s Vespa for a ride. Allow me to explain – within a radius of a few meters of my house, there are now three Vespas, two red and one black, and I wandered over to the wrong red one and tried to unlock it before I realised my mistake. Luckily the owner, who happened to step out of his house at that very moment, had a sense of humour and laughed the matter away, and I went back to our long termer and fired it up. It started up with a muted thrum, and I was off soon after.

The Vespa fits right in with the overall vibe of Bandra, Mumbai, which is primarily a Christian area and still has lots of old bungalows
and narrow alleys; in some aspects, it reminds one of Goa. The Vespa is nothing if not a cheerful looking scooter, and it seems to be very popular in the area. I’ve seen at least a dozen different ones being ridden about, and sometimes the other riders will smile at me and nod appreciatively – well, not at me, but at the fact that I’m on a Vespa.

It’s a comfortable scoot, with a roomy enough seat for the pillion, although the downside is that the under-seat storage doesn’t take my full-face helmet. The ignition lock is also a little fiddly; once locked, you need to move the key around at different angles in order to extract the key. Also, on several occasions, I turned the key to the start position and the front storage flap came open – it’s quite sensitive! Overall, the build quality is not what you would expect from a scooter that costs this much money – the switchgear, in particular, feels flimsy.

No, you don’t buy this scooter for Honda levels of fit and finish – its USP is looking good from almost any angle, and I often find myself looking out of my kitchen window just to catch a glimpse of it. A couple of young girls even stopped and took photos of themselves with the scooter – there’s something about it that draws attention, there’s no doubt.

You don’t buy this scoot for outright performance, either, because it isn’t the most sprightly one out there. Performance is adequate, and quick dashes away from the stop light are easy enough; the brakes are rather wooden, and require a decent squeeze in order to begin the process of stopping, but you get used to this soon enough. So far, the Vespa’s been returning a respectable 37 kpl and, overall, it’s been a fun two weeks since I got a hold of it.