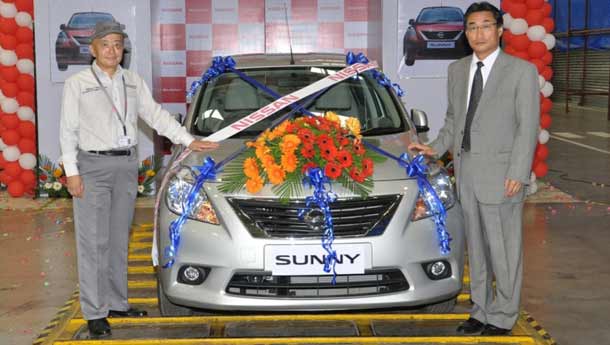 Production of the Nissan Sunny in India has begun! The Sunny is Nissan Motor India's C-segment sedan which will aim to take on the City, the Fiesta and the Verna among others. It is the second produced-in-India offering from Nissan in just fifteen months, the last product being the Micra hatchback, and is being readied just in time for the upcoming festive season. The Sunny is perhaps one of Nissan's most popular sedans the world over and while it is a bit conservative in terms of design, its highlight should be the interior space on offer (something Nissan insists is really great and going by what the Teana offers, we'll take their word for it) and a set of frugal powerplants. The Sunny will be manufactured at the Oragadam plant near Chennai, which is also where the Micra is being built. Nissan states that 85 % of the Sunny's components are locally made, 40 % of which are made in Chennai itself.

Nissan's second coming, in the form of the Micra has given them the popularity they lacked earlier and made the brand more accessible to the Indian buyer. The Sunny will only add to this when it is launched around November this year and expect it to be priced in the 7 to 9 lakh rupee bracket.