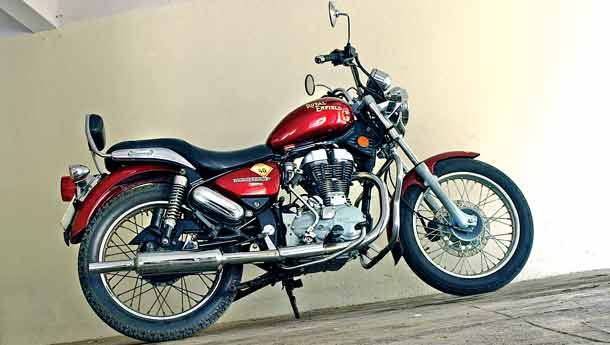 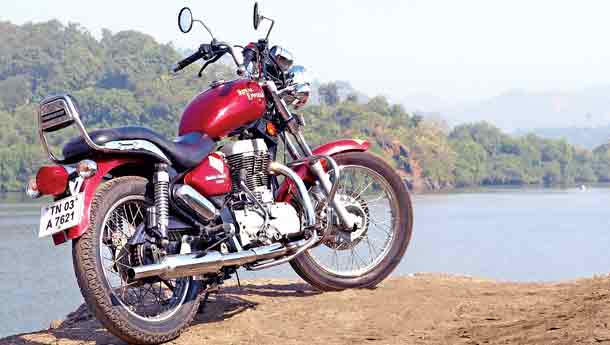 It is a beautiful November morning and there is a nice chill in the air. And I am writing this story instead of riding the wheels off the Royal Enfield Thunderbird Twinspark. That, dear reader, is the failing of the newest Enfield. Actually, you cannot call it a new motorcycle. Nothing with alphabets conjuring up to read Royal Enfield on the tank can be new, right?

There are a few people I would like to introduce to you before I get to this, the first road test of a motorcycle that I have done in ages for this magazine. First of those is a man called Sidharth Lal or simply Sid. He today runs the Eicher trucks but before that he landed himself  the golden opportunity to do a Harley-Davidson to Enfield India. He knew the ingredients – a time warped motorcycle engulfed in myth, better quality and there by reliability and bingo, India would have had its very own naked British singles that the world would love to own. Sidharth gave the direction by launching the cruiser, the Thunderbird, an obvious hint at the Harley-cruiser image and a quick way to get established at least in India. And the Thunderbird, which featured an AVL developed engine was much more reliable, had better finish, was more  economical and greener than the older 350s and 500s. The rest of the world got motorcycles that looked straight out of the 1950s and 60s while the T-bird was getting more Indians to ‘real’ motorcycling where there are no plastic fairings but only genuine bones to break when you fell down.

The second man who needs no introduction in the automotive circles is Ravichandran – the man who gave unsuspecting Indians the Supra and the Shogun. And the man who helped Bajaj become a serious force in motorcycles. If someone knows how to sell motorcycles in India, it is Ravichandran.
The third block, ahem, has a journalistic background. Sachin Chawan used to regularly crash Royal Enfileds in his effort to go faster when he used to work for Overdrive (I hear). Sachin today works for Royal Enfield and organises rides to far flung parts of Himalayas which has earned him cult status already. He has been sowing the seeds of 22nd century Enfield worship amongst youngsters who normally spend an abnormal amount of time in front of PCs. And last year he rode a heavily modded Enfield, still an Enfield, to third place at he cruel event called Raid de Himalaya. I was there too, driving a new SX4 with a heater, and I saw how Sachin was riding on sheer will power to overcome a nasty fever and a snowstorm.

With people so committed and able on their fold, Royal Enfield should be developing, building and selling better motorcycles. Motorcycles that make me jump out of a bed on any morning and head for the garage, instead of  a workstation, right? Alas, they have a lot of work to do, indeed.I have been looking forward to ride T-spark though, since I am in the market for a  new motorcycle and there is nothing out there that is big enough for a 5’10, 95 kg homo sapien, Indiene. So it better be another Enfield (remember the Thunderclap? I need something with electric start, hence) – either the 500 LB or the new T-bird. So this test was important in every sense of the word.   The new T-spark, T-bird looks good from almost every angle. It is certainly a cruiser but one in the Moto Guzzi cruiser mould than a Harley-clone way. So you get a raised tank, a massive antler of a handlebar and essential chrome. It has got the correct proportions and there is nothing you want to change. The seating position was comfortable for me, as long as the ride does not last longer than two hours. Well, you do take a break after two hours on our roads in any case. So. The handlebar-foot peg-seat positioning feels good on slow maneuvers and the T-bird is a surprisingly easy motorcycle to ride in traffic – unlike the longer breed of cruisers (have you tried your hands at a Yamaha Royal Star? Any Yamaha  Royal Star?). The chrome on the wheels is terrible and was already rotting in the test bike – the rest of bling work is of a better quality though. Mental note: if I buy another Enfield, I will have alloy-wheels on it, however horrible they look – since dogs do pee on motorcycle wheels and there is nothing more I detest corroded wheels and spokes on a motorcycle – any motorcycle.

I am yet to come to terms with the electric starter in the test bike. It makes lots of noises and I had to develop a technique that involves two hands to start the bike without flooding the carb. I was expecting a healthy whump, whump idle and was disappointed at getting a mechanical chatter where every moving part of the new UCE (unit construction engine) was singing to different tunes. Trust me, there is nothing more unbearable than a  British single that is out of  sync and the only excuse RE can have is the fact that it is NOT a Brit single any more.

First gear engages positively but the clutch release results in a judder that can put the pelvic thrusts of an ageing Rajnikant to shame. You are not supposed to stay in first gear for more than, say, three seconds since vibrations will start shaking your vertebrae loose. On to second and then third quickly and life gets better. And you are really riding a British single all over again. According to Kyle who has been riding all kinds of Brit singles as well as Enfields for years, the roll-on performance of the new T-bird is impressive.  And our tests show that it  60 kph in 6.7 seconds and 100 kph in 25.8 seconds. In Enfield terms that is whopping, ok?  And for the record it can do a top whack of 108 kph though an optimistic speedo will happily show you 115 plus.  Not that you buy Enfields to emulate Hayabusas, still.

On to the final gears and settle down to 70 kph and you are actually enjoying the new Enfield. Sure it will go faster and it can cruise at slower speeds but things are peaceful and more manageable at 70 kph – it will steer, stop and be ready for overtaking at this speed, hence. But what hurts is the mechanical rhapsody that is packaged into this new engine as the speed climbs to 80 and beyond. The exhaust note is inimitably British, but the cacophony is not. May be the test bike was really out of tune as it had been to a Himalayan Odyssey, amongst other things. Vibrations of the tuning fork variety attacks the foot pegs and takes over at 80-100 kph – which is a shame, since you really are enjoying the ride at this point. Surprisingly the vibes don’t get transmitted to the short-arm rear view mirrors that works well. The best way to come to a halt in an Enfield is to reduce your speed through the gear box – which, I must say, worked well for me. There are false neutrals that you can stumble upon every now and then, still. The rear drum is spongy on the feel and good for parking speeds at best. The 280 mm front disc bites with a vengeance though and when combined with the rear drum, provides more than adequate panic-stopping ability to the motorcycle. That said, the braking could get more progressive and may be a better bedded-in pad up front would do wonders.   One of the Enfield rides I fondly remember is to Amritsar from Delhi, en route to Lahore, Pakistan. I rode an AVL T-bird and it left very good impression on me. This chassis can handle more cornering forces than what most owners are capable of and the rubber, despite looking a bit thin design-wise, provides decent grip and a sense of solidity to the proceedings. That is good news indeed for those who plan to spend their days exploring winding roads that leads to spectacular sunsets. And the ride quality over bad roads or no-road conditions is best in its class in India.

The engine with hydraulic tappets and an automatic primary chain tensioner  apart from the twin-spark ignition will help RE meet future emission norms easily and more importantly it returns 40 kpl (combined cycle) without much effort. So it is an improvement over the single-plug model and hence a landmark for the legendary brand. But I do have a question which I hope will be answered by the three men whom I mentioned at the start of this report. Couldn’t Enfield source a complete single cylinder motor from an established motorcycle maker? May be Yamaha? Alright, if that would have proved expensive, couldn’t RE look at dedicated engine makers like Bombardier? Or develop a single with an established motorcycle maker who would have liked to benefit from cheap labour in India? The point I am driving at is that RE needs a refined, reliable, economical and green engine – and the Twinspark model looks like an interim, unrefined, oil dripping option more than anything else. It could have been done better…period. I can hear the excuses already – we will steadily improve the bike over the years, right? Well, aren’t you bored doing that already?

In short, I would still rate the 500 LB with electric start over the Twinspark T-bird as the motorcycle of choice from the Enfield stable. And that is only because Honda, Yamaha, Kawasaki and Suzuki and perhaps Bajaj has not understood the need for a large bore, single cylinder motorcycle to satiate my appetite. Change, as they say, is the only constant in this world and in the case of Royal Enfield, I am happy to attest,it is a continuous process than a sudden phenomenon. If you are looking for an ownership experience that would get you ready for even tougher institutions like marriage, then the Royal Enfield is for you. It continues to be a character building exercise than a mere motorcycle. And when the lust is lost and love translates to care…you will go a long way with a Royal Enfield.

To sum up, Enfiled continues to be in a league of its own and that means I have no option but to recommend it. Try the 500 LB too before you sign the dotted line, ok?