The Pug and the Bug 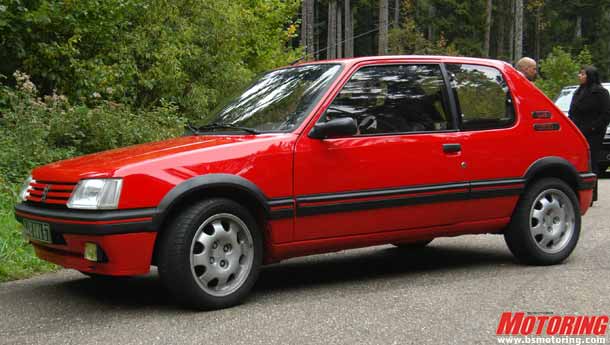 I drove the Veyron. And I also drove the Peugeot 205 GTi. On the same day. The Veyron is a hypercar, while the 205 GTi is one of the greatest hot hatches every made. And it just happened.

Bugatti will soon be setting up its operations in India in Delhi and well, what do you know, I got a chance to drive the Veyron Grand Sport in France early this month. As well as visit the Bugatti factory in Molsheim, and hold your breath, visit the God-awesome Schlumpf Museum in Mulhouse. Indeed, I am one lucky dude. If you want to read about the Veyron experience (it is so mind-blowing that life is now pre-Veyron and post-Veyron!), you will have to get your hands on the forthcoming November issue of the magazine. Don’t miss it.

Then what explains the GTi? Well, motoring enthusiasts are the same the world over. Even a language barrier doesn’t come in between if you get talking cars. So what happened on that glorious day on the curvy hill roads close to Molsheim was that we were taking pictures of the Veyron going up and down. Then I heard this superb exhaust note reverberating all around, the driver revving it to glory till he shifted to the next cog. When he drew up close, I gave him the thumbs-up, which he acknowledged as he passed by in a blur. Wow.

While we were still hanging around, I heard the roar again and the red GTi drew up and parked to see the automotive monument that the Veyron is. While the GTi owner was admiring the Veyron, I was admiring his car! Soon we got talking: I in English and he in French - but both of us were talking the same language! Somehow I got through to him that I will get pictures of him with the GTi and the Veyron if he would allow me to drive his beauty. Deal.

The 205 GTi was a mid-1980s model with a hot near-130 bhp 1900cc motor. Sitting low in it, with my arms and legs stretched out, I shifted to first and hit the curvy roads... Whoa! Revving each time I shifted, the hills echoed with the music from the loud aftermarket exhaust. The gearshifts were snappy and the steering feedback was terrific. The engine was really potent in the way it yanked the GTi ahead every time you gave it the stick.

It was like being in a go-kart – I don’t remember the last time I had that sort of sensation. Zen? No, not hot enough. Uno? Ditto. The Maruti 800? Yeah, why not. Though these machines had the right spirit going for them, they weren’t exactly hot hatches. So, for me, nothing I have driven before (except of course the VW Golf GTi) has come close to the unadulterated joy that the Peugeot was – despite having driven the Veyron earlier in the day. What a terrific experience! Thank you, Christoph!