The lure of the Innova In the country's cluttered automotive market, finding and sustaining a niche is a monumental challenge. New models are soon copied; and champions and early-starters struggle to retain their uniqueness on streets swarmingwith 'me-too' cars. Japanese car maker, Toyota, however has managed to buck the trend with Innova. Nothing seems to impact its popularity and despite a recent increase in price, demand has only surged ahead. Neither has it been upstaged by a look-alike though that may soon change as Tata Motors and Mahindra & Mahindra are both coming up with similar products.

From the time the first Innova rolled out on Indian roads back in 2005, it seemed to hit the right spot. The car soon rode up the charts, becoming the company's best-selling brand in no time. Further, no rival (except Tata Motors with the Aria) launched a product to challenge the Innova. Many expected things would change when Toyota Kirloskar Motors launched the Innova Crysta last month. The new car came with a premium tag and a massive increase in price, nearly Rs 50,000-3 lakh depending on the features. The Innova Crysta starts at Rs 13.96 lakh compared to Rs 13.46 lakh for the older Innova for the base variant whereas the top-end (manual) is priced at Rs 19.63 lakh as against Rs 16.73 lakh for the older version (all prices ex-showroom, Delhi). But sales numbers have only headed north. From an average of 5,000 units per month of the older Innova, wholesale sales hit 8,200 last month and this month it is expected to be in the range of 7,000-8,000 (the Cauvery stir has hit production).

According to a company executive, there is an order backlog of 15,000-20,000 units and a waiting period of one to two months. The company is keen to bring down the waiting and increase production but is constrained on capacity. 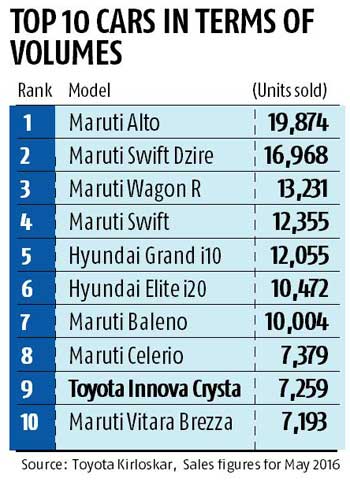 What has worked? According to N Raja, senior vice president and director sales and marketing, Toyota Kirloskar, a common refrain among Innova owners was: 'I have been driving the Innova (old) but I always wanted an automatic.' "So we introduced the Crysta with an automatic transmission. The result is that 50 per cent of the Crysta buyers are going for the automatic version," said Raja. Toyota launched three variants with automatic transmission with the top-end breaking the Rs 20 lakh barrier for the first time.

Another important point swinging customers the Innova way is its styling. Designers at Toyota decided to give the Innova an SUV (sport utility vehicle) look, inspired by the fascination that Indian auto buyers have for that segment. This turned out to be a smart move as Toyota managed to wean customers away from a potential purchase of the Mahindra XUV500 which is priced in the same range.

"Innova owners use it within the city; take it for a weekend drive, besides commuting to work, which means it has appealed to everyone. So it was decided to give the car

SUV looks. Then, we added a host of never before seen features to its interiors. About 60-65 per cent of the Crsyta customers are existing Innova owners," added Raja.

Contrary to popular belief, about 25 per cent of the Innova customers are commercial buyers (those who use it as a taxi). Toyota expects this share to further come down.

However Toyota's sway over the segment will soon be challenged as Tata Motors will shortly launch the Hexa, a premium, aggressively styled multi-utility vehicle which will be priced lower than the Innova Crysta. Mahindra & Mahindra is also believed to be working on a premium multi-seater vehicle. While exact positioning of this new product will be disclosed at the time of launch M&M is keen to make it a success given the failure of the Xylo.

The true test of the Innova will lie in whether it can withstand the new kids on the block. If it does, the brand would have risen above the attraction that the category has for Indian buyers. If not, yet another auto brand could find itself swimming in the swarm of me-too cars.