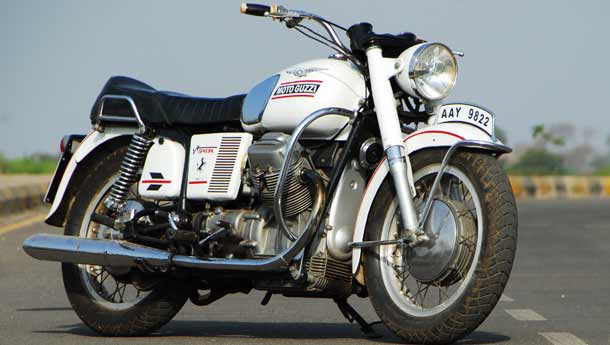 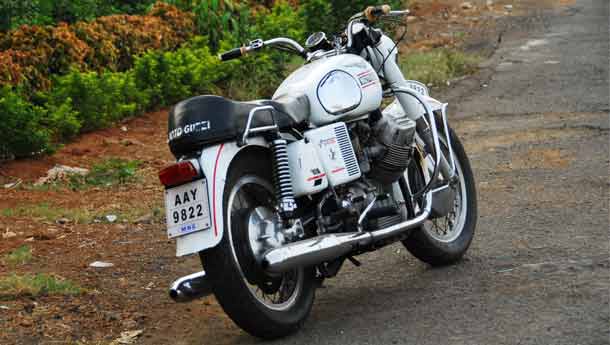 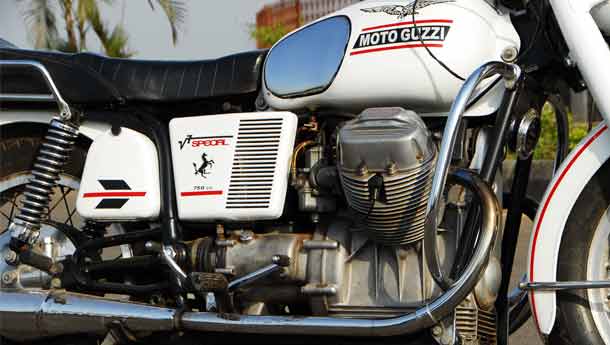 Let’s face it, when it comes to beauty and passion, there are few better than the Italians. There is no denying the fact that they make the hottest women, the coolest automobiles and most gorgeous clothes. And did I mention their gorgeous women? Among the many cars and bikes that caught my eye at the recently held vintage and classic rally in Mumbai, was this particular beauty. The droves of predominantly British machines couldn’t do much to keep this motorcycle from sticking out. But then again, it’s Italian and that’s what they do. Walk through any airport across the world and you can instantly make the Italians out from the rest. The way they gesture animatedly and passionately with their hands is one instant giveaway. Another would be the haute couture and the long legs, but I won’t go into that.

If you’re the type to whom size does matter, you won’t be disappointed with the Moto Guzzi V7 Ambassador. The tank stretches across as wide a space as the Po Valley itself and the side panels are nearly as large as an Italian mob family. The Veglia speedo and tacho are pretty huge and the handle bars are nearly endless. But on the whole, the overall lines of the Ambassador aren’t evocative of the famed Italian passion. The Guzzi isn’t sexy and curvaceous and unlike other Italian machines, it won’t get you drooling and lusting over it. Instead, it’s quite boxy and although it isn’t ugly to look at, it has a very sober appearance – bland enough to keep it from getting onto the bedroom walls of hormone-raging teenagers.

But the Guzzi isn’t for pimple ridden teens anyway – it’s a mature machine.The engine for example, isn’t for the high revving racer boys. No siree, this 750cc transverse V-twin is a motor that loves doing its thing at its own pace. That means grunt from ridiculously low revs and in top gear, it’s quite easy to cruise along at speeds slow enough to watch the grass grow around you. It pulls along like a tractor and that’s no surprise really, since the V7’s motor was derived from a mill designed for one. Yes, you read that right – a tractor. In the early 50s, the Italian army felt the need for a small tractor and Moto Guzzi duly stepped up with a 90-degree V-twin engine for the thingy. Then, someone in the factory got the brainwave of mounting a variant of this very same engine onto a bike frame and thus was born the V7 – Moto Guzzi’s first V-twin engined motorcycle.

When you need to speed things up a bit, the 750 gets up to pace surprisingly easily. Overtaking on the highways is a cinch – wring the throttle and the 45 bhp engine pushes you ahead of that idiot hogging the entire road. But ambling around at about 90 kph all day is what the motor loves best. It’s in its element there, singing its deep throated melody.The gearbox takes some getting used to and that could have something to do with the fact that the Italians wouldn’t have you shifting through the gears straight away. No, there has to be some dramatic ritual and foreplay involved. In fact, the experience was so passionate and intense that my mutterings would have made the most obscene-mouthed sailor curl up into a ball. The cogs seemed to have a mind of their own and slotted into place the first time as often as the Italians have conquered the world. In short – almost never. Prince assured me that there was a knack in putting the gearbox through its paces with the heel-and-toe shifter. No matter how many times he tried to impart that sound skill to me, it never happened despite my trying my best and all I got in return were false neutrals and wrong gears. And when I finally began to stop caring, everything miraculously started falling into place. Upshifting and downshifting had suddenly become so easy and the more I rode it, the easier it got.   Cutting through sharp corners on the V7 is like trying to push a steam locomotive through the kink in a garden hose. Given an option, the V7 would love to straighten out the corners, rather than bank and deftly carve through them. This bike is a highway cruiser and it makes no bones about it. What beats me though, is why on earth the Italians would want a straightline cruiser rather than an agile motorcycle, especially since the longest straight in tiny Italy is probably about an inch longer than a strand of spaghetti.

Well, er, actually they didn’t – the Ambassador was built for the US of A. The folks at Moto Guzzi figured that the Yanks have a strange affection for everything big with a V-twin bolted on and the V7 looked the part. Endless straight highways was what the Guzzi was built for and the big relaxed engine combined with the shaft drive meant lower maintenance with more time left for riding rather than wrenching.

The Moto Guzzi is clearly a strictly tarmac motorcycle, with a ride quality that is surprisingly hard for a machine of its character and dimensions. In spite of all of 228 kg pushing down onto the suspension, all but the slightest of ripples and road imperfections reached the seat. Although it isn’t back breaking, the overall experience isn’t the best I have had on a classic motorcycle.

Looking at the size of the huge drum brakes, it is really quite natural for anybody to assume that they are good enough to stop a bunch of loony Libyans in their tracks from hijacking something. But the first time I pulled hard onto the stoppers to gauge how well they worked, the Ambassador gingerly went forward as if nothing happened. Dropping a few gears and after some fervent verbal mumblings from my side, the bike came to a halt. I am sure that those drums work much better than they did. Most probably, the lack of bite could be due to the liners on the brake shoes going hard.   I’ve always been a fan of classic and vintage motorcycles, particularly the British marques. The Besas and Triumphs and the like are lithe machines with relatively crisper handling and sharper reflexes. The Moto Guzzi V7, on the other hand, is everything but any of those things. It’s big, slower revving, placid and quite a handful to ride hard around the twisties. Yes, and quite naturally, I want one.

The originality of the V7 was spectacular. No details were spared and in fact, the restoration has been so intensive that even the ignition key is the real deal – Magneti Marelli. The original Veglia meters tick away like they were made just yesterday. We would like to thank Md Yousuf Hussain and Harpreet Singh Gugnani (Prince) for allowing us to put on some miles onto this Italian machine.

In the final years of World War I, three young officers in the Italian Air Corps had a vision. Carlo Guzzi, Giorgio Parodi and Giovanni Ravelli dreamt of a motorcycle marque that would build world beating motorcycles. Guzzi was to design the bike, Ravelli would pilot the bike to victory and Parodi would bring in the finances. Things took a cruel turn when Ravelli was killed in an air crash.

However, the other two persevered and completed their first motorcycle in 1920 with a novel (for that era) unit-constructed single cylinder engine and four valves driven with an overhead camshaft. The engine’s flywheel was fitted externally and this layout was part of Moto Guzzi for many years.

The new marque, whose name was suggested by Parodi, was born. And true to their dreams, a Moto Guzzi ridden by Gino Finzi won the Targa Florio event which was only the second race the company had entered. Since then, Moto Guzzi actively entered and excelled in various races till they pulled out of racing in 1957, but not before they had won 14 world championship titles and 11 tourist trophies. Some of the most significant Guzzis were the Motoleggera, Falcone, Le Mans, Galletto scooter and of course, the V7 Ambassador and V7 Sport. After the company changed hands thrice, Moto Guzzi was acquired by Aprilia in 2000. However, in 2004, Piaggio bought over Aprilia, which meant that Moto Guzzi was now theirs too and it still is to date.