The 'Impulse' to lead was 'Swift' 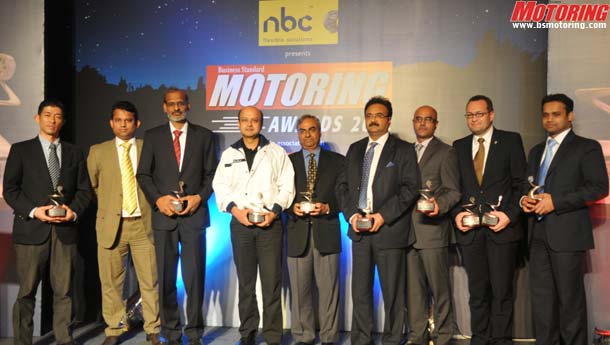 With 11 new cars that were launched in 2011 being shortlisted for the top award, competition was intense. These are the Ford Fiesta, Honda Brio, Hyundai Eon, Hyundai Verna, Mahindra XUV500, Maruti Suzuki Swift, Nissan Sunny, Renault Fluence, Skoda Rapid, Toyota Etios Liva and the Volkswagen Jetta. The Swift walked away with the trophy for remaining the benchmark car in its segment. In fact, the last generation of Swift had won the Motoring Car of the Year 2006 award. Maruti Suzuki’s managing executive officer, engineering, I V Rao, collected the award.

The top honour for the Bike of the Year went to Hero MotoCorp’s Impulse. India’s first true on/off-roader, this motorcycle is a segment-buster that has an affordable price tag. The Bajaj Boxer 150 and the Honda CBR250R were the only other competitors in this category. Sanjay Bhan, Hero MotoCorp’s head, marketing, received the trophy.

The Brio may not have pipped the Swift to the post, but its brilliance was acknowledged. It won the Jury Award, that is given to the most significant car other than the Car of the Year. Seiki Inaba, director, marketing, Honda Siel Cars India, accepted the award for the Brio.

The Range Rover Evoque, which is on its way to writing SUV history, won the Premium SUV of the Year award, which was received by Rohit Suri, head of Tata Motors’ Premier Car Division. The Premium Car of the Year went to the Audi A6, which won it despite other worthies like the Aston Martin Rapide, Maserati Quattroporte, Mercedes-Benz CLS, Volkswagen Passat and the Volvo S60 plus, of course, its own siblings, the A7 and the A8. Audi India’s brand director, Michael Perschke, collected the trophy for this benchmark sedan.

Performance cars have a one specialty about them, and that is to go very fast. At a time when performance aspects are being pushed to the outer limits, these cars have to excite the senses and deliver the goods. Cars as varied as the Aston Martin DBS, Audi RS5, BMW 650i, Ferrari 458 Italia, Lamborghini Aventador, Maserati Gran Cabrio Sport, Maserati MC Stradale, Mercedes-Benz SLK and the Volvo S60 T6 were in contention for the Performance Car of the Year award, but it was the awe-inspiring Lamborghini that won the hearts of the jury. Pavan Shetty, head-operations, India, for the supercar maker, accepted the trophy.

The Automotive Pioneer of the Year award is given to an automobile that pushes the boundaries of safety, comfort and driving pleasure and sets the trend for others to follow. This year, the luxuriously-appointed, highly innovative Audi A8 bagged the award, which was collected again by Perschke of Audi India.

Year 2011 will be remembered as the one when the Formula One circus finally landed in India. It was historic because the pinnacle of automotive racing was held in the country for the first time, and the credit for its success goes to Jaypee Sports International, that bagged the Motorsport Excellence award.

The last two awards were given to two big motorcycles. The Import Bike of the Year award was bagged by the BMW S1000RR. Sharad Kachalia, director-sales & marketing, Navnit Motors which is the official importers of BMW Motorrad, received the award.

The Premium Bike of the Year went to Bajaj Auto’s Kawasaki Ninja 650R, introduced in the country last year. The award was collected by Amit Nandi, vice-president, Probiking. Other contenders in this segment were the Honda CBR 250R, the Hyosung GT650N and the GT650R.