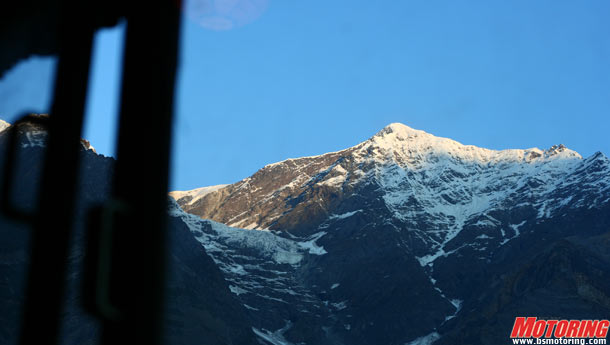 And I thought the only thing that I ever got addicted to was nicotine. Well, not any more though – I kicked the butt well and good some two years ago. There is still the urge, the empty feeling, the craving at times but, ahem, I can control all that for the better cause. Almost two years back I came back home from a snowed-out Raid de Himalaya and said 'That's it – no more mountain drives for me.' After five consecutive editions of the Raid de Himalaya - driving everything from the little Alto to Wagon R and Swifts to SX4s and winning minor silverware and crashing spectacularly once - I had come to the conclusion that the Raid was getting crowded.

Alas, the mountain is till there. And once you are bitten by the mountain bug, there is no escaping it. It started as an itch – can’t we just peacefully drive to Leh? You see, no rally pace, stop for photography when we want, have chai and Maggi on the road and take in the whole scenery for a change. Then one thing led to another, proposals flew, messages were sent and as I type this, two vehicles are ready in Delhi for some serious adventure. No, I cannot reveal which vehicles they are at this point of time.

What I can reveal though is that as I close my eyes and I can see prayer flags fluttering at Tanglang-la, the lonely Hotel Jispa, the magnificent More Plains and the colourful mountains on the way to Leh. It is amazing how one looks forward to getting breathless and exhausted.

And yes, I have also organised a Royal Enfield Classic 500 to ride from Manali up to Leh – alright at least part of it I will be riding and it will be a dream come true.

As usual, the Rohtang Pass will decide whether we are worthy enough to go to the lap of the Himalayas and then on to the top of the world. As I write this, rains and mudslides have created havoc on the approach road to Rohtang and one can only hope that the pass is open for public the day we want to drive off from Manali.

Maybe I should smoke a cigarette to celebrate even contemplating this drive. Or maybe I should not. Wish us luck and expect a rather unusual story in the September issue of Motoring!