The day I met Michael Schumacher 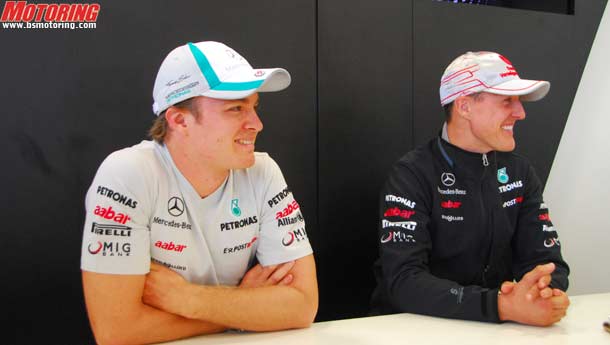 It did not start like any other normal day. Saturday, the 30th of July, was going to be a long one. After a late night, I woke up at a bizarre 2:30am in a hotel room in the ski resort of Kitzbuhel in Austria and quickly got ready. I put the last few items in my suitcase and checked out with the rest of the motoring journalists. We had an early morning flight to catch from Innsbruck airport to Vienna, and from the capital of Austria to Budapest in Hungary. Yes, it was the day before the Hungarian Grand Prix and we were headed to watch just that.

The hour-long drive to the Innsbruck airport was a random memory, shifting between noticing vague towns and going back to sleep. We reached the airport early enough to see airline staff walking in. Two short-haul flights got over in a blur and we were in Budapest. Destination: the Hungaroring.

So were we really meeting the big man? In our schedule before leaving Mumbai, it said TBC. On the new world-class highway leading from the airport to the track, for me it was more To Be Circumspect rather than To Be Confirmed. The buzz increased as we reached the track. Traffic cops were efficiently directing traffic, there were hordes waiting on the sidelines hoping to catch a glimpse of some superstar, helicopters were droning in the sky. We were VIP guests of Mercedes-Benz, so there was no waiting for us anywhere. Formalities done with, I walked out of the media room with a special souvenir: a media pass for the Hungarian GP hanging from a colourful lanyard.

Anticipation reached a higher level as we were led into the Mercedes-Benz GP motorhome. Those of other teams were parked evenly forming a high-tech, high-spec, high-profile, high-octane lane between the pit garages and the paddocks. Wasn't that Lauda? Why was Eddie Jordan wearing that outrageous pink shirt? I have seen these guys wearing these red overalls on the television before, haven't I? Oh, I didn't know Massa was so tiny....

TBC became C when we asked the Mercedes GP representative whether we were indeed meeting the great man. Sure, at 5 pm, for 15 minutes, with both Schumacher and Nico Rosberg. Ross Brawn and Norbert Haug for another 15 minutes following the meeting with the drivers. All this would be after qualifying. Ohh-kay!

After that, it was three hours of sheer anticipation, trying to look all normal and interested in the food placed before me. I didn't carry anything to get the requisite autographs on. Just a notebook and a ballpoint pen. Not even the March 2010 issue of BSM where we had a cover story on MSc's return to racing, where we had exclusive emailed answers to our questions from the man himself. Fiddling with my food at the motorhome, I was wondering why I missed carrying that issue with me.

It was getting close to 5pm. We journalists are usually flexible with time. Not this time. Waiting around a table on the first floor of the motorhome, there was a discussion on the modus operandi of taking autographs and posing for pictures. Questions? Who wanted to ask questions to Michael Schumacher when all we wanted was tangible proof that we met him!

He walked in followed by Rosberg. A big smile on his face, the obligatory cap on his head and bracelets of several kinds on his right hand. He was certainly not short and was very fit. He shook hands with all of us and it was then that I noticed how large and firm his hands were. Barely did he get seated that we were thrusting photos, caps and notebooks in his hand for autographs, while cameras went ballistic. In the middle of all that we were asking him questions. Looking at the sheaf of pictures he had to autograph, he wondered how much money we were making out of it! 'I think I should be your business partner then!' he joked.

MS wore the air of an achiever about him, with the full knowledge that he had nothing to prove to anyone, but only to himself. He wore his greatness lightly, chatting and joking with us and smiling all the time. We badgered Nico also with questions and requests for his autographs, but it was clear that MS was the star.

All the questions are now a distant memory even though it has been only four days since I met him. I remember thinking his answers being sensible and shorn of any ego and that he was enjoying himself very much - whether with us Indian journalists or at the track.

It was time for him and Nico to leave. All of us assembled for a group photograph and they were out. It was indeed a long day, the day I met Michael Schumacher.