The Cost of Coffee 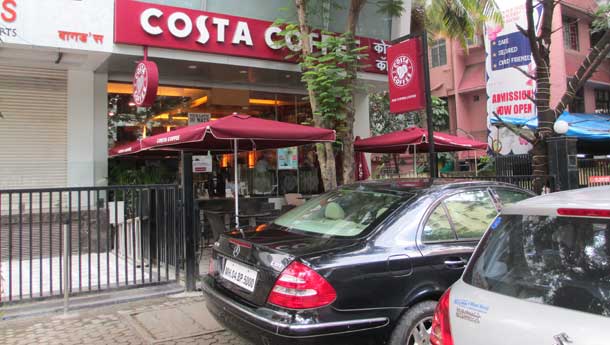 One would assume that if you own a car you would know how to use it. Even if you don’t know how to drive, you would know some basics of car etiquette. For example, cars are generally driven on roads and not inside apartments. Or when the traffic light says red, you’re expected to stop and not start driving backwards. Or that you drive along with traffic and not against traffic. Elementary stuff, right? Stuff that even a five-year old kid will know.

Also, if you own or drive a car, it would be safe to assume that cars are driven and parked on roads, while pedestrians have the right of way on footpaths. In other words, you don’t drive or park on footpaths usually, right? Wrong, according to the customers of the relatively new Costa Coffee outlet near my house in a Mumbai suburb. Here, the rule is that the broad pavement has been provided by the Brihanmumbai Mahanagar Palika for the customers of Costa Coffee to park their cars, and block much-needed access for pedestrians. This problem never existed till this coffee outlet came up.

One knows the kind of people who walk into these outlets; I call this chain Costly Coffee. So you have Mercedes, BMWs, Jaguars and Audis blocking the footpath so that their respective owners need not soil their expensive footwear, or lose some priceless sweat to walk a few metres away. If the big cars guys can do it, heck, what stops the Hyundai, Toyota or Honda owner? And so it goes. The attitude is ‘I own a car, so I can park it wherever I like.’ After all, in our country, owning a car seems to be a right and not a privilege. As a car owner, I have my fundamental rights. Duties, what duties?

It is a pathetic situation and makes me wonder whether we should introduce a mandatory, annual test for all car owners to check whether they know what are their rights and duties, and of course, reiterate what is right and what is not. I have seen elderly people and small children coming onto the road because the footpath is blocked by these cars, while the boors sitting inside sip coffee and perhaps think of other innovative ways to abuse the city and get rich while at it. I have tried getting these owners to move their cars from the pavement. Numerous times, I have walked into the outlet, asked the staff to find out who the owners are and told the owners to move their cars. What stunned me were the reactions of people:

“So what? There is enough place to walk, no?” (Swift-driving dude with his girlfriend)

“What’s wrong if we park it on the footpath?” (Youngish executive fiddling with his Blackberry)

“So where will we park, then?” (BMW 3 Series owner who’s come with his family)

“Yeah, yeah, we will move it in some time after we finish.” (Bunch of guys looking as if they are in the real estate business)

“Think you’re too smart, huh? I am an ex-cop and a nagarsevak. Asking me to move could prove to be very expensive for you!” (Goon in a white shirt and black trousers and a political party symbol on his white Hyundai Accent’s numberplate)

Yup, I have been threatened as well. Every one of these and many-many-many others I have spoken to think it is perfectly all right to break the law. Tomorrow, I am sure it will be okay to mow down some schoolchildren too.

That’s not all. I have spoken to the local Shiv Sena corporator and she has sent a letter to Costa Coffee, but nothing has happened. I have called the cops and nothing has happened. I have spoken to the manager of the outlet and told him to put up a sign asking customers not to park on the pavement, but such things are obviously beyond his pay grade and his IQ.

However, my anger is not directed at the authorities or the outlet, who can act against these offenders or at least prevent this from happening. It is against the car owners who think there’s nothing wrong in what they are doing. Mass acceptance of doing something wrong is a sure sign that there is something absolutely rotten with us Indians. Your children see you break the law today, and tomorrow they will do just that because it has your tacit, no, vigorous approval. I’m not the only one who’s complained and made a fuss about it. Other residents too have protested, but there is no respite from the problem. Meanwhile, the fight goes on.