News is that Tata Sons Chairman Cyrus Pallonji Mistry has applied to the Directorate General of Foreign Trade for the import of a Jaguar E-Type of 1971 vintage. It is interesting that the head of the conglomerate that owns Tata Motors that owns Coventy-based Jaguar Land Rover should be hankering after one of the most iconic cars ever built by any car maker ever. Named for the leonine animal, the two-seater (there was a later four-seater version too) actually has the grace - and the look - of a shark lazily swimming in the warm blue waters off the Caribbeans. Its design, the work of Malcolm Sayer, has sent wordsmiths into raptures, and adjectives employed to describe it invariably include the word "beautiful". Indeed, a blue E-Type is one of only two cars actually mounted in its permanent design collection by New York's Museum of Modern Art, the other being a 1946 Cisitalia 202 GT.

An art critic who saw the Jaguar E-Type at MoMA may have been unimpressed, describing it as "blatantly phallic", but the Jaguar E-Type is ardently chased by collectors across the world. Typically, a well-preserved E-Type that has most of its original equipment intact, including the jack and other tools, sells for above $60,000 (around Rs 37 lakh), though if you are lucky you could get one that is passable for as little as $15,000. Some have sold for as high as $120,000. The valuation of the car depends on factors like the quality of the original paintwork, the upholstery, mechanical repairs and replacements required and the presence of original accessories like radio.

Of the 1971 E-Type that Mistry apparently has his eye on, there are two versions. There is the E-Type Series II and the Series III, which came out later that year. The difference between the two in terms of design lies in the nose. In the earlier version, the nose is more pointed with a smaller air intake. In the version that followed, the nose is bigger and is accentuated by a latticed grille. Otherwise, the car, to the viewer, remains much the same with its languorous lines, an almost art-deco steering wheel on the left side, wraparound rear bumpers, polished leather interiors, period Philips AM/FM radio, and, of course, the chrome wire wheel, a throwback to the early automobile era. It also had headlights housed in a covered recess, but auto laws in the United States required the lights to be naked, and this took away a bit from the smooth, aerodynamic look of the car. 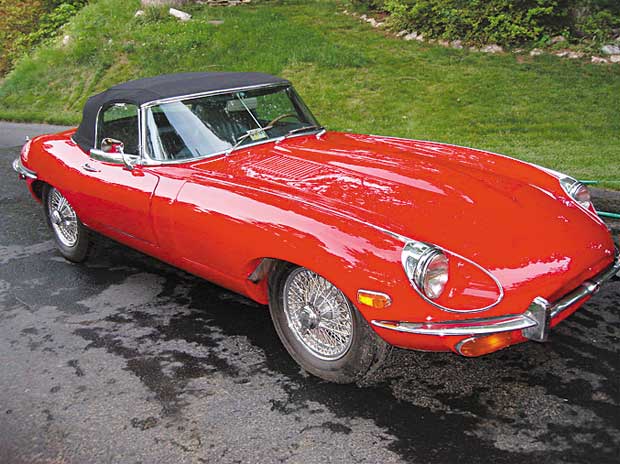 The 6-cylinder, 4,235 cc engine churned out 246 bhp in the Series II, which went up slightly to 250 bhp in the Series III. You can, therefore, imagine the sound the car made when the ignition was turned on. In fact, the deep growl of the V12 engine was almost a signature of the car in itself. For its period, the car had very smooth gears, power steering and tight suspensions. Its long wheelbase and its monocoque design gave it an enviable ride quality. The design also allowed for longer doors that made for easy entry and exit. With the C-Type and the D-Type - both highly successful racing models - as its predecessors, the E-Type could race from standstill to 96 kmph in just seven seconds and reach a top speed of 240 kmph.

Jaguar sold 13,490 units of the Series II and 15,290 of the Series III. With only so many of them still in motorable condition, the premium that collectors pay for them is understandable. If Mistry misses out, perhaps he can go to Olx. There is a 1972 E-Type listed there for $44,500.