From the “Ultimate Driving Machine” to “Sheer Driving Pleasure”, BMW has come a long way. Even though the Bavarian car maker has changed the most famous slogan in the automotive world, what hasn’t changed is that it still makes luxury cars with a sporty nature. Yes, we know that BMW imbues its sedans with all the accoutrements that make for luxurious driving, but what impresses is that the same care is given also to its flagship sports utility vehicle, the X5.

The luxury SUV, which BMW prefers to designate as a sports activity vehicle, is an urban-centric vehicle that focuses on the on-road performance rather than on off-road adventures. This is the third generation X5. How different is it from its predecessor?

The X5 has grown slightly in dimensions: it is 29 mm longer and 5 mm wider than its earlier version. This might not sound like a sizeable modification, but it still looks much bigger now. It continues to have a long wheel base and a short bonnet, giving it its distinctive proportions. BMW’s new design philosophy is carried into the X5 and it has been given more prominent and rather imposing kidney grilles at the front. The adaptive LED headlamps are angular in size and the twin pod clusters look like someone is staring you down haughtily. BMW has decided to get rid of the bulging wheel arches and even the X5’s side profile now looks more uniform — like a stretched and perfectly fitted Armani suit. At the rear, you can see the SUV’s new set of lights. Beside these changes, the rest of the design features are retained from the previous avatar.

This model has better aerodynamics. According the company, the SUV’s front fenders now act as ‘air curtains’ and reduces drag by channelling the air flow. 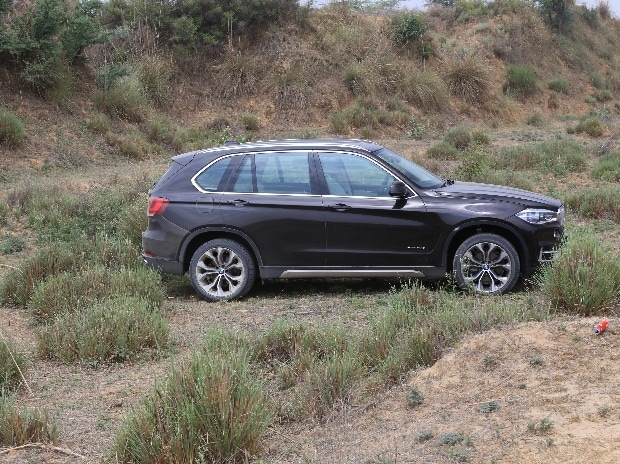 The X5 has always been a spacious vehicle, and with its bigger dimensions, it only feels more open than earlier. It continues to easily host five passengers, though the seat squabs lack full thigh support even as they remain comfortable. It also comes with third-row seats that neatly fold into the floor without encroaching into the boot space. One has to keep in mind that the last row space is ideal for children because it can prove quite cramping for adult limbs.

The build-and-finish of the cabin is flawless, as expected in a vehicle in this segment. The design of the interiors remains the same as in other BMW vehicles, but the X5 gets in addition a classy touch of beautiful wooden panelling on the dashboard and door panels. Ambient lighting, designed to run across the cabin, can be customised to your mood —blue, white or orange. There’s only one word for it: awesome.

The 10.3-inch infotainment display screen sits handsomely on the dash and provides good visibility. There is also the huge panoramic sun-roof, and the Harman Kardon sound system ensures that the only sound you hear is the musical note emanating from the speakers. The tailgate is now more user-friendly with its ability to split into two: an upper liftgate and a lower tailgate that opens out as a loading bay to ease hefting in of luggage.

Under the hood is the tried-and-tested 3-litre diesel powerplant. It did duty for the older X5 but now generates another 10 hp more for a total output of 258 hp. The torque too has gone up to 560 Nm. Yes, that’s a lot of power, but it is complemented fully by the flawless 8-speed automatic gear system that provides lightning quick transmission. The SUV is totally a driver’s vehicle rather than just a cushy ride for a sahib owner. Therefore, it has a spontaneous response to acceleration that pushes you back into the seat, leaving you with a serious high.

The X5 comes with the usual three driving modes: Comfort, Sport and Sport+. The two sport modes are engineered to make the engine respond a lot more quickly, and yet it is the middle sport mode that is ideal for city driving, provided the roads are smooth. The Comfort mode ensures the potholes are taken in stride because the suspensions soften up. Sport+ is all about revving all the way to the red line and racing with the wind. Keep in mind that the steering wheel becomes heavier in the two sport modes. Overall, the X5’s ride quality is more on the stiffer side as it runs on low profile tyres, but this also provides great grip on the road. Along with an excellent monocoque chassis, the X5 has razor sharp control while going into sharp turns. The BWM X5 is unique among luxury SUVs for its focus on day-to-day driving rather serious dune bashing. This makes it the most fun SUV to drive with its very responsive 3-litre engine and 8-speed gear box. The cabin space is more than adequate in the middle row, and the boot’s loading bay is more convenient due to its folding platform. The iDrive computer system now comes with an optional BMW app that has popular social media apps like Facebook and Twitter. The car comes fully loaded features like the Harmon Kardon music system. This mature-looking X5 will cost you Rs 71.60 lakh pan-India, and in our opinion, if you have that kind of money, it is quite simply, an excellent buy.