The Audi A7 is a perfect friend for long drives 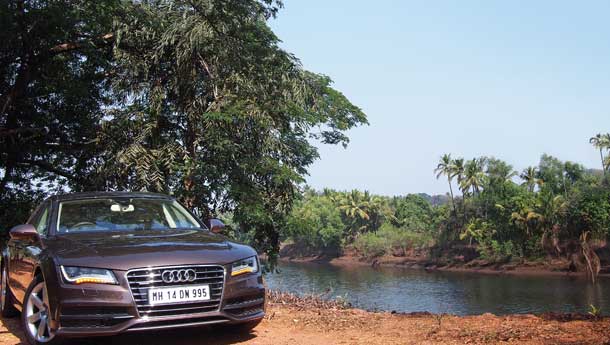 What is it about big, fancy cars that makes other road users behave like complete idiots? Drive around in a tiny hatchback and nobody gives you a second glance – get into a car like the Audi A7 and suddenly, everyone discovers that they’re actually closet F1 drivers (and perhaps lacking in the anatomy department as well). I was motoring peacefully along NH4, en route Kolhapur, keeping to myself, minding my own business and all that sort of thing, when I happened to glance in the rear view and saw a Chevy Cruze so close to me that it classified as an intimate encounter.

I was doing a steady 140 kph, at which point the A7 wasn’t even yawning, but the Cruze was obviously making much more of an effort; every time I moved left or right, the chap driving it followed me around, and he was doing some pretty stupid things in order to try and overtake. I got rather annoyed, so I simply floored the throttle – within seconds, the little git was but a speck in my mirrors. That’s one of the great things about this car – it can go from lolloping along to full tilt in an instant, and the 3-litre diesel is a truly fantastic unit. It provides superb driveability and comes into its own on the highway, where it lets you hold high triple digit speeds while barely ticking over.

When you have access to an Audi A7 for a few days, you don’t just trundle about in the city – you get out and let it stretch its legs, which is why I was on NH4, destination Goa. I’m not sure what it is about my Goa drives and Audis – the last three times have been in products from Ingolstadt. I’m not complaining, because they provide the middle ground between Mercs and BMWs that make long drives a real pleasure – and the diesels are amazingly frugal, with me seeing a steady 16 kpl on this particular trip.

The interiors are superbly built and finished, although the reduced headroom in the A7 (sportback styling has its drawbacks) is a bit of a pain, literally – I bumped my head a few times, and I couldn’t raise the seat height to as high as I usually like to sit, because my head was flush with the roof; entry and exit are also a bit compromised, because of its low-slung stance. And how difficult would it have been to put a simple USB or AUX port in there, I ask you? An iPod connector is very posh, admittedly, but not everyone worships at the altar of Apple,
and SD cards are so infra dig. There’s no complaining about the sound system, though – that Bang & Olufsen unit is fabulous. Oh, and the massage function in the front seats is a life saver – it kept my back in good shape over the 1,400 km that I drove in all.

This is a tremendous car, really – to call something this expensive ‘practical’ is perhaps a stretch, but it actually does answer to that description, although its sheer length can be a drawback in narrow or crowded areas. The ‘boot’ is absolutely huge, it’s very frugal indeed, there’s loads of creamy torque on offer, the cabin is superb and it looks like a million bucks – it’s the only Audi, apart from the R8, which really stands out, in my opinion. I wouldn’t mind another go, on my next trip to Goa.