The all new Lamborghini Gallardo comes to India 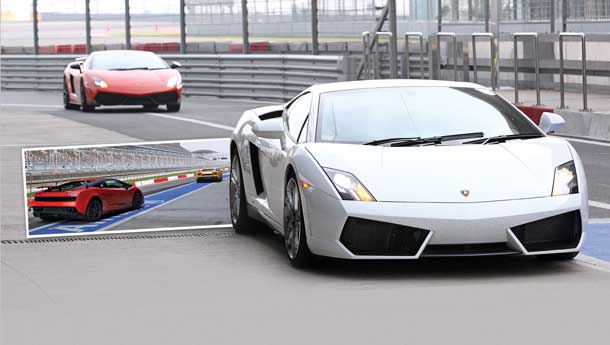 The new Gallardo is in town. New as in a minor facelift that the car has received recently – I don’t know how the Lamborghini design studio has managed it, but it looks even more menacing. New trapezoidal and triangular elements now make it stand out, and the air intakes at the front are bigger to snort even more of the invisible stuff. The two-wheel drive 550-2 is now complemented by four-wheel drive versions in the form of the 560-4 and the 570-4 Superleggera Edizione Tecnica.

To celebrate its arrival in India, Lamborghini organised a track day at the Buddh International Circuit recently. Not what you think: track minutes, rather than track day, would give you a better idea! We had a few tantalising laps only, unfortunately. We drove the non-facelifted versions, as the fundamentals of the supersports car are unchanged. Setting off in the 550-2, the car comes through as a bit tame compared to
the more powerful and lighter 570-4. The 550-2 needs a good driver to tame it, especially if you dare remove the electronic nannies. The 550-2, however, is not as manic as the 570-4 and therefore a bit more forgiving, if you behave conservatively. The brakes are not that sharp, the powertrain is not that volatile though it fights to stay under electronic control when you are attacking corners with fury. I unfortunately don’t have an Italian name like Balboni, so it was just as well that the ESP systems were at work. But given more time with the machine and the track, it is possible to harness the full potential of this magnificent rear-wheel driven Lambo.

The 570-4 is the beast. Its wild nature and a better power-to-weight ratio asks for you to push it – if you don’t, well, you’re not doing it justice. With four-wheel drive, there is controlled aggression, for whatever it’s worth because in the Sport or Corsa mode, it will exhibit tendencies worthy of a man-puncturing wild bull. The engine note is strident, the gearshifts are like whiplashes and it is certainly not for the soft-hearted. The lighter build means the weight-shifting points under extreme cornering are different compared to the 550-2, so you need to relearn a bit of your driving skills if you step into this car from the two-wheel drive version.

Though I didn’t get a chance to drive it, I believe the LP 560-4 is the all-rounder of the lot. It combines the best of both the other two versions, and is more liveable with in day-to-day driving. It offers the safety net of four-wheel drive, while inside it is not as bare and ‘carbon-fibrey’ as the Superleggera. It is a touch more civilised without losing out on the wild nature of a true Italian bull. If I had the money, I would settle for this one for sure. Yeah, but for that, I need to drive it – drive it long and drive it hard. So Lamborghini India, help me make that decision.The writer was on a media invite from Lamborghini India