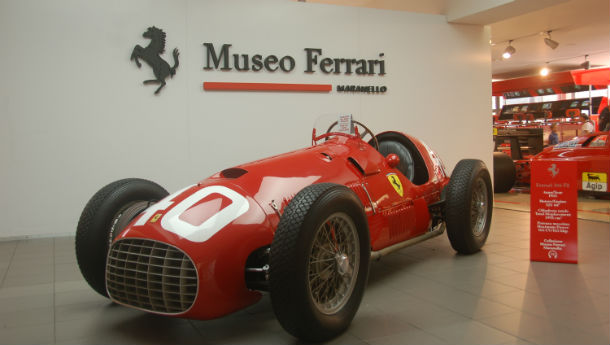 I couldn’t have scripted it better. As if the umpteen signs guiding me to the museum weren’t enough there was now a scarlet F12 escorting me to the haloed brick walled gate. Welcome to Maranello and how! Trust me, I’ve been to equally important landmarks (Boeing factory for one, Farnborough Airshow for another) but none of those towns warm up to it’s local celebrity like this one. Don’t forget, these are probably the noisiest neighbours you can have and yet, the bookshops, the cafes, the supermarkets... pretty much everything seems to be celebrating Scuderia Ferrari. The restaurants serve you Berlinetta pastas and Testarossa martini’s and pretty Italian waitresses talk to you about SWBs. Muscle stiffening stuff that.

Then there is the museum itself. Unless you are at Pebble Beach, Goodwood or Nick Mason’s house, I am quite certain that you wouldn’t get to see a 166 Inter, a 250GTO, a 365GTB4 Daytona, a F40, an Enzo, and a dozen other Formula One winning metal under one roof. If you opt for the factory tour (don’t get your hopes up, you get to see the factory from the outside!) you get driven in a bus in the factory premises  and to the Firano test track, which depending on your luck you could get driven on (relax, you are still on the bus)  or shown from the boundary wall.

Driving down from Maranello to Sant’Agata is an experience too. These are idyllic Italian roads where the very first Miura cut it’s teeth. (It really does happen. I for one have never seen a speck in the rear view mirror grow so fast into an Aventedor). In fact this is probably the very road that a fuming Ferruccio made up his mind to teach Enzo a lesson in building supercars. In contrast to prancing horse town, there’s no real build up to the Lamborghini museum. May be even after all these years the Il Commandetore is still dearer to the people. Or may be it’s just fear. After all Enzo was the sort of man who, if he were the Pope, would expect God to report to him.

So while the Ferrari museum has road cars, race cars, driver memorabilia and the likes, the Lamborghini museum has one example of every car they ever made, a couple of formula one cars, a couple of concepts and er...  that’s about it. Albeit seeing a Miura, a LM002 (5700cc V12 petrol in an SUV, those were the days!) and a Countach is quite something.

But look past the ‘you’ve got one so we’ll get one too’ feel of Sant’Agata and you realise what an unbelievable motor city this is. And remember, Maserati and Pagani aren’t too far away. Within a hundred square kilometres they are building cars that are so special that seeing them is an occasion and driving them is nothing short of mesmerising. You could call it madness, they call it Modena.

And as if that weren’t enough there’s a company just down the road at Bologna that does exactly the same with two wheels.