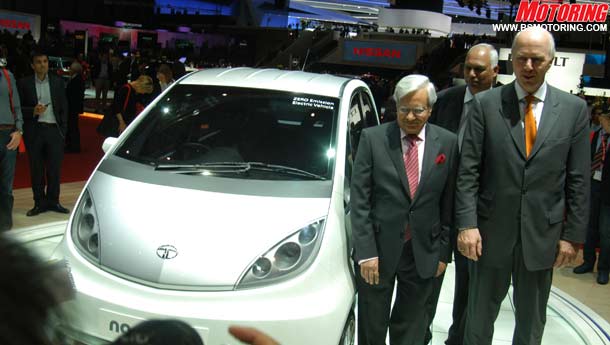 Tata Motors is looking to increase its presence in Europe and believes electric is the way to go. At the Geneva Motor Show, the company previewed the production of the Tata Indica Vista EV, that is to go on sale later this year across Scandanavia and other select markets of Europe.

“We plan to progressively introduce electric vehicles in Europe,” said Ravi Kant, vice chairman of Tata Motors. The company also showed an electric version of the Nano Europa at the show. Clive Hickman, head of Tata Motors’ engineering, said the car used the electric motor from the Indica Vista and a 12-Kwh battery pack and 100 km range.

“The battery pack is a scaled down version of the one on the Indica EV, as is the motor which is de-rated,” he said. “The idea is to achieve significant economies of scale. We found that in Europe, 80 per cent of the driving is 60 km or less a day. So, we think a range of 100 km for the Nano is fine in terms of cost of manufacturing as well.” The Indica EV has a range of 200 km.

While the Nano did not require significant changes, since the Europa was designed to be an electric vehicle, the Indica had more engineering work involved. “The Indica Vista was never designed with an EV in mind and therefore we had to get rid of the spare wheel and make it a pure four-seater, to offset the weight of the battery,” said Clive. The changes to the car also included an altered suspension spring and damper ratings.

The company isn’t looking at bringing in electric cars into India just yet. “Infrastructure is a problem and so is the manner in which electricity is produced in India,” said Prakash Telang, MD, India Operations. “It’s more about the source of electricity and unless we are assured that we aren’t removing pollution from the roads, only to add those emitted by electric plants, we can’t move into the local market.”

Both, Telang and Hickman, were keen on hybrids for their much larger vehicles. “We already have hybrid bus technology ready,” said Telang. While, Clive added that a 9-Kwh battery pack was all that was needed for a 2.0-litre engined diesel bus.

“Even for a vehicle the size of the Aria MPV that was first shown at the Delhi Auto Expo in January, a hybrid would fit best, given that the platform is a body-on-ladder type,” said Clive.