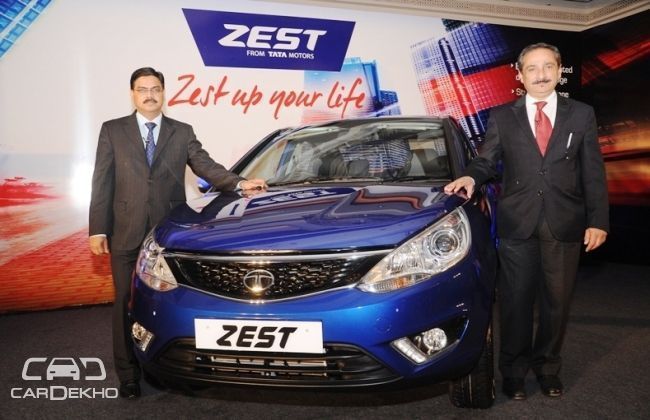 Speaking about the new Zest, Mr. Girish Wagh said, “Tata Motors launched the HORIZONEXT 15 months back. With HORIZONEXT, Tata Motors plans to bring differentiating factor to each product. The Zest brings Tata’s new design language, which was previewed with Pixel concept in 2011 and MegaPixel in 2012, to production. The Zest comes loaded with several first-in-class features such as LED tail lamps, daytime running lights etc. The Zest ”

He also added, “Tata Zest is only car in the segment to come with an AMT in a diesel vehicle. The petrol Zest is the first in class to get a turbo charged petrol engine in the form of 1.2T, delivering best in class power and acceleration.”
When speaking to the press, Mr. Ranjit Yadav said, “Although while the auto industry showed a decline in Tamil Nadu, the compact sedan segment grew 2.5%. We have received a great response for the Zest and over 50% of the pre-launch bookings were for the 1.2T Revotron Petrol variants in Chennai and Tamil Nadu.”

Talking about the market share in the compact sedan segment, Mr. Yadav said, “Tata Motors has about 5 to 6% market share with only the Indigo model on sale. We are looking to increase it with the launch of Zest. We are also revamping all our 160 dealerships to a new design that will be more convenient for the customers while making the operations more transparent.”

Answering to a question about the introduction of Zest Petrol AMT, Mr. Yadav answered, “Tata Motors has launched the Zest with a diesel AMT for now to gauge customer reactions and to see the response. Zest Petrol version with AMT may come in the near future if there is enough potential.”