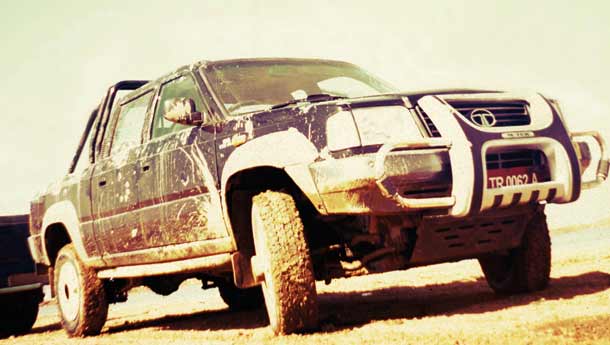 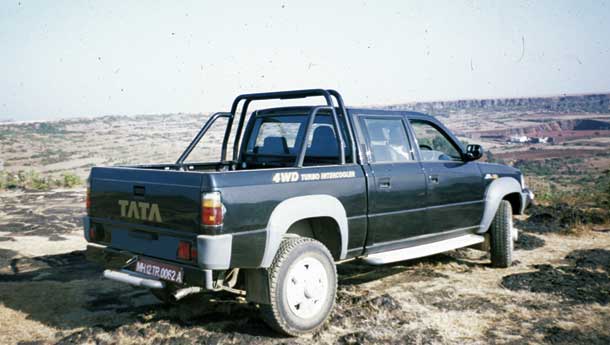 I have always fancied pickup trucks, I would love to have one as a personal vehicle. So it was quite exciting for me to be here in Pune, where Tata had lined up their new TL 4x4 for test-drives. Glancing at the slickly produced, textured brochure of this new personal pickup filled me with promise. Set in the mountains, a picture of the TL glaring at you from the cover made it look like the kind of vehicle Rambo would drive through the paddy fields in Vietnam. The brochure, which had pictures of trendy people with active lifestyles, stated that the TL is sold in diverse countries like South Africa, Turkey and Saudi Arabia. ‘It’s got to be an authentic pickup truck if Tata manages to flog 500 every month,’ I thought.

In real life, the TL is quite rugged to look at. The straightforward Tatamobile lines are still there, only here there was a massive bullbar taking all the attention at the front end, and the wheel arches were really protruding from the sides. The overall effect is of a gentle giant.

I got into the pickup and we left Tata’s pretty Lake House in a convoy down to the NH4 that leads towards the hillstation of Panchgani. Driving through traffic wasn’t very easy – the first cog is just good enough to get moving and by the time you get to the 30 kph mark on the speedo, it’s time to shift to second. However, manoeuvring the truck through traffic was relatively easy thanks to the hydraulically assisted steering, although squeezing a massive pickup between Pune’s bustling bikers isn’t easy at all.

Once we left the city behind, things started to get better. The 130-km route to Panchgani had a mix of arrow-straight highways and some beautiful twisties up the ghat sections. The TL’s 1948cc four-cylinder turbodiesel (yes, the same 92 bhp unit that still does duty in the Tata Safari) meshed with the right set of cogs churned out 19 kgm between 2000 and 3000 rpm. Which allowed us to pass vehicles with relative ease on the highway run. But we couldn’t be too generous with the throttle and hog the miles, as the front discs/rear drum combo did not exactly inspire confidence. Besides, the moment we touched three-digit speeds, the wind noise became a bit overwhelming, prompting me to cut down my effort on the accelerator pedal.

With miles of straightforward highways in front of me, I had some free time to check out the interiors. The only creature comfort that the TL had on offer was an aircon. The controls seemed a bit tacky and wouldn’t have looked out of place in a car from the 1970s. Some of the plastic sections felt cheap and even had sharp edges. While a cigarette lighter and ashtray were standard, a stereo was optional. The TL comes with tilt steering, but there’s hardly any room to play with. I would have expected better quality of interior trim in an automobile that caters to a lifestyle segment – this is something Tata should address seriously.   Back to the driving then. After a good long hour on the seemingly endless ribbon of tarmac, we reached the ghat sections which had corners that seemed to have been borrowed from a race track. The narrow Goodyear Wrangler tubeless radials outdid my expectations as the TL effortlessly went around the corners with the rear holding its line. Second and third gear were well configured, and the good mid-range did not require me to use the stick too often while climbing. Pretty neutral handling and effortless chugging from what’s essentially a 1,800 kg mammoth!

We reached Panchgani after tackling some nice twisties. Now Panchgani is famous for its extremely flat and aptly named Table Land – I suspect the photography for the TL’s brochure was done here. So I decided to do just that, and also check out the four-wheel drive prowess of the pickup. The TL comes with a shift-on-the-fly switch to engage 4WD, which was begging to be used. Shifting it to 4 High, the TL made short work of the muddy areas on the periphery of the lakes at Table Land. With this confidence, I decided to trundle right into a small pond. It seemed to be a good idea at that time (have a parachute, will jump!), but in retrospect, it isn’t one of the brightest ones I’ve had.

The TL crawled slowly into the pond and, with a bit of misplaced enthusiasm, I depressed the accelerator pedal. Only to have the wheels spinning wildly, without any traction. I was truly stuck. All our efforts to extricate the beached TL from the pond came to nought. Enter another TL to the rescue. Thank God for bright ideas and seat belts. We quickly unbolted one of the seat belts, hooked it up to the tow bar, engaged low-ratio... and what do you know? It worked! We managed to haul the monster out of the muck and back to terra firma. No real feedback from this incident, except that I’ve affirmed my stupidity and confirmed that a seat belt can be used to tow a vehicle that weighs two tons.

So does the TL 4x4 fit into my idea of a personal pickup truck? Hmm, not exactly. One reason is that it’s priced quite high – the 2WD double cab costs around Rs 6.2 lakh, while the 4x4 version is almost Rs 8 lakh – I’m afraid my lifestyle does not support this lifestyle vehicle. And I thought after 17-odd years of building the pick-up, Tata could afford give it a price tag that could give the Indica a run. And the other aspect is that merely fitting a bullbar and a roll-bar and throwing in bits like airconditioning and power steering in what is essentially a hardcore commercial vehicle is not enough. It’s not persuasive, I think, for thethinker/photographer/DJ/mountain biker/camper/fishing couple that the beautifully made TL brochure is gunning for. I guess my search for a personal pickup truck is still on.