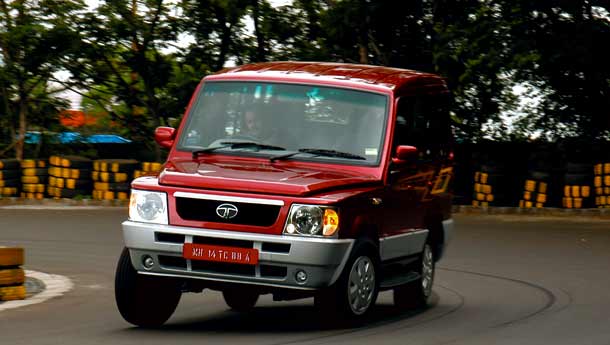 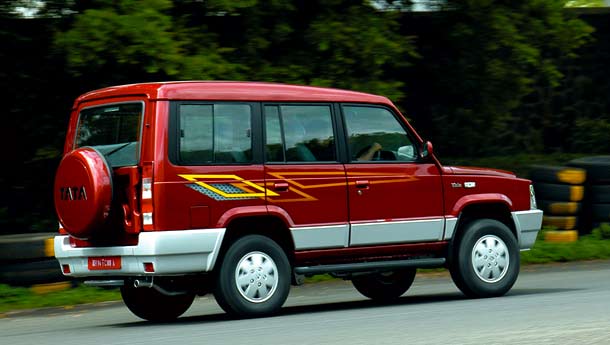 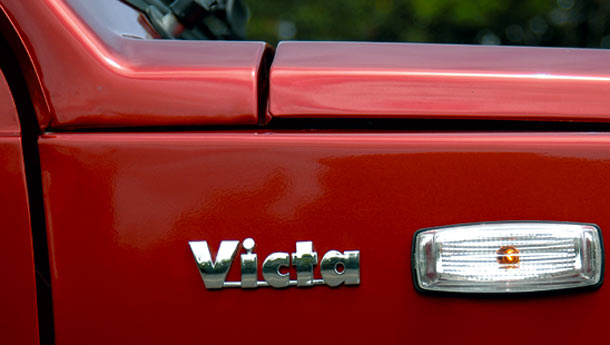 Bowling along the Expressway towards Tata’s facilities in Pune, I wondered about how new the new Sumo would be. Would it be another Mark I, Mark II, Mark 3 job that the Amby was so, er... well-loved for, or would the changes be so extensive that I would have to re-learn a yellow-plate people-mover form I’ve so become familiar with?

Or one simply buys a Qualis. Or a Tavera. Or a Scorpio. Moms drive these, so do pops. While kids sit behind, pulling funny faces-against-glass at cars passing by, without said parents knowing, the sly little buggers. And if it’s a DINK family, there’s at least a Garfield or two vacuumed to the rear window instead. If you’re wondering what DINK is, you’ll just have to find out, won’t you, because I’m not telling... and while you’re about it, you might as well do a little homework on all those clever little automotive acronyms – ORVMs, CHMSL, PS, AC (the Sumo Victa has these), ABS, ESP, SRS, TCS (the Victa doesn’t and won’t, at least until 2007, when the new X2 platform replaces it).

To make matters more complicated, the Qualis is poaching on what was once the Sumo’s exclusive preserve – the tourist taxi trade. Because families buy the Toyota, families are also preferring to hire it instead. As far as Tata’s concerned, their Sumo sales could be a lot better and as far as I’m concerned, the same boors that once piloted Sumos are now wrecking my daily commute... behind the wheel of the Qualis in addition.   The think-tank at Tata Motors, armed with a not-too-substantial, yet not-too-insubstantial development kitty of roughly 47 crore rupees, thought that now is the time to get families to purchase the Sumo by the horde. And how do you do that? Ask Britney Spears. I can’t digest her Bremen-style braying, but the recent... well, embellishment-enhancement has helped – I’ve sort-of stopped channel-surfing when she gets on air, though the mute’s kept on.

My first glimpse of the ‘new’ car provided a taste of the changes incorporated. Starting with a ‘Victa’ tag suffixed to the Sumo badge, the new bits also include New Land Rover Discovery-style, simplistic clear lens headlamps – not too bad, but flanking a hideous toothy-smiley, cheese grater grille. And sitting atop this is a stretched-out chrome lip – all this to presumably carry the Indica-Tata family identity forward. It might be doing some of that and helping build a ‘face’ for Tata, but that grille isn’t too aesthetic and urgently mandates an inspired re-think. A new contrast-coloured, plastic bumper below, carrying a set of parking lamps, looks a lot more sophisticated and ‘in’ when compared to the sheetmetal it replaces – so some plus points to the Victa’s styling team, then.

A walk around the car tells you that the major panels have been left untouched – this would have meant expensive re-tooling – and that wasn’t the brief. The result is that the Victa’s panel gap tolerances are not as good as some of the newer competition around. The Tavera or the Scorpio’s shut-lines are a lot tighter, the panels a lot less wavy, for instance. But little bits and pieces have helped the freshen the image of the Sumo – the grey-black plastic-clad running boards, the new door handles, the matte-blacking of the pillars surrounding the glass area... I have to admit at this point that there are points in the attention-to-detail stakes that need fixing, but after a suggestion or two from the assembled motoring journos – the engineering team was furiously jotting it all down on little notepads – I hope the glitches will be more-or-less sorted out. Essentially, what you should find at the showroom will be an MUV that’ll get as close as possible to the Qualis, if not the Tavera, for fit and finish detailing. Don’t expect wonders from that grille though – Tata thinks it looks just right.

What the styling team have got bang-on is the rear of the car. The original Sumo was cheap and quick to develop from scratch, thanks to raiding the truck division’s parts-bin. And that meant one very recognisable bit from every 1210 or 407 prominently gracing the vehicle – the tail-lamp assembly. The new clear-lens unit that replaces it is in-your-face in execution – it keeps the same, simple vertical orientation, but the unit is bigger, bolder and a lot better looking – the Victa finally gets lamps that are purpose-built for its handsome rear-end. Couple that with a lesson learnt from the Safari – the externally mounted spare wheel and its tubular support are shrouded with body-coloured plastic and this cleans up the tailgate visually. Also, a thoughtfully provided gas strut in the rear door makes light work of hauling the heavy unit open – kids can do it too, it seems. Finally, the Victa can proudly shake a winning booty at the Scorpio or the Tavera. Or a certain Ms Knowles.   Get into the car and the ‘new, improved!’ theme continues. The dashboard and most importantly, the reach-rake ratio of the steering wheel have been reworked massively, and this means an MUV that’s a lot, lot more ergonomic to drive than its predecessor. Steering feel too is good – going around the test track showed that there was more precision than the Scorpio, for instance. Possibly, moms too will finally be comfortable behind the wheel. A sort of Teutonic simplicity to the dash – clean, straight lines, pseudo brushed-steel accents and better quality plastics – help image perception and there is a feel-good factor about sitting inside the Victa that was lacking earlier. Quite simply, the inside is a lot more car-like than any of the competition around and that includes everything that starts with the letter ‘S’ to the letter ‘Q.’ One big crib – the handbrake lever’s finally gone and done a Mark 4 – it’s been repositioned from the facia to the floorboard, right of the driver, next to the door.

But more good news now – the seats have been re-structured with correct ergonomics in mind. At least, the bucket seats up front – you have a lumbar adjuster for the lower back and ample lateral and thigh bolstering to keep long drives short and altogether, firm padding with just the right amount of give to keep your booty still. The rear two rows are a good exercise in front-facing packaging – ample legroom for all if you are ‘average Indian.’ And yes, there’s a roof-mounted air con vent system that works well – but maybe the glossy sheen in the plastics here makes the unit seem a bit downmarket and shoddy. Point to address, Tata. But I can vouch that the air-con system is extremely effective overall.

Bits and bobs to be looked into – door-mounted arm rests – they have to reposition themselves to corroborate their name. Current placement is charted expressly to excavate a thigh when the Victa goes around a corner. And according to random notices planted all over the Pune facility, it’s evident that Tata doesn’t encourage smoking. More evident when you belt up in the Victa – the ciggie lighter is impossible to access unless you are a six-inch tall, diet-conscious gnome who’ll travel on the carpeting and pull it out deftly from behind the gearlever... between crushing gearshifts. For what it’s worth, it might as well be placed inside the glove box. With a lock on. Or in a following car. Or at home.

Starting and running the Victa is the next thing – the car instantly feels a lot more refined. No major changes have been administered to the engine –- the characteristic whine is still there when the revs enter turbo territory, but the whole shebang feels a lot more muted, a lot less intrusive. Salute a conscious effort to make the environs a lot calmer for the passengers, additional NVH insulation being poured in from all over. And then, for driver refinement, there’s the re-worked, double-cone synchro gearbox, a la the Safari. Shift action is positive now; the throws are shorter, the process a lot less rubbery and engagement surer. What mars the package is the short gearlever-high armrest position – an elbow-up, wrist down, vulture-wing-hung-out-to-dry position. But we have been promised that the issue is being dealt with. Whether the gearlever will be made taller or the armrest dwarfed remains to be seen, but here’s hoping that door and centre armrests level out at approx the same altitude.

Driving the Victa around Tata’s test track, one thing was evident. Ride quality has improved tremendously. It’s more pliant now, and even without a full wedding party occupying it by force, the Sumo deals with bad tarmac with a lot less aggression. But this unfortunately comes at the price of handling refinement – the Sumo is possibly the MUV to have if your kids want a lifelong Esselworld experience. It rolls heavily under brisk cornering and goes nose-down when you brake hard. I understand that R&D has worked hard to arrive at the best balance between ride and handling, but this is not it. It’s the best compromise, possibly, but best balance it is not. In this respect, the Tavera shows the best body control, followed by the Qualis and the Scorpio. The Victa, I’m afraid, falls short of expectations here.

Overall, I would say that the entire Victa exercise is a good effort from Tata. The Sumo certainly needed a thorough working-over and it’s a lot easier to live with today. But re-inventing an older package successfully is a very difficult job and the Tavera and the Scorpio still maintain that edge over it. Maybe it’s time instead to take lessons from Madonna then... I watch her on the telly without ever channel surfing. With the volume turned right up.