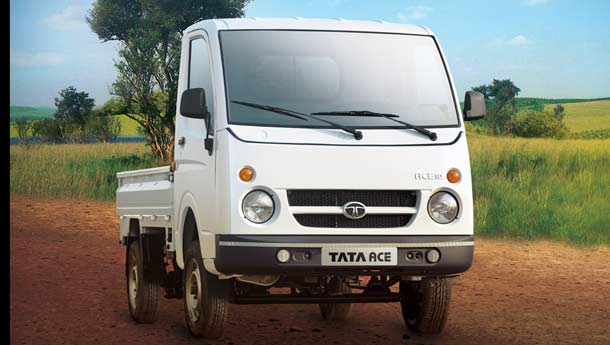 Like its dozen-odd peers, Tata Motors may be struggling to sell cars, but the company has served an ace — quite literally – in another segment. The Tata Ace, India’s first mini-truck, has done what no four-wheeler in India has been able to achieve so far – its sales have crossed a million in exactly seven years and three months.

Ace has outpaced even Maruti’s Alto, which took two more months to achieve the million-plus sales milestone. The Tata Ace and its sister brand, Tata Magic have also managed a consistent market share of 78 per cent in the cargo segment and 79 per cent in the passenger segment.

There’s more. Every fourth commercial vehicle sold in India today is now an Ace. And with a compounded annual growth rate of 39 per cent, more than 22,000 units of the Ace and Magic are sold every month, which is more than 4.5 times the nearest competitor - Maxximo and Gio from Mahindra.

Buoyed by the fact that the last half a million sales mark came up in just 26 months, Tata Motors is now talking about achieving the next million sales in about three years.

Ace’s spectacular success came because it prised open a new market segment. Ravindra Pisharody, executive director, commercial vehicle, Tata Motors, says the company had figured out that there was an opportunity below the pick-up and above the three-wheeler segments. “Three-wheeler was a large segment back in 2005; and we wanted to come out with a product that could challenge three-wheelers,” he says.

Others agree that Ace’s USP is that it is a four-wheeler in the three-wheeled goods carrier space.

That Pisharody is bang on is evident from the numbers. From 14,000 units-a-month five years ago, the cargo three-wheelers volumes have dropped to below 7,600 units a month. For the period April-September this year, a total of 45,597 units were sold — a fall of 13 per cent as against 52,537 units sold in the same month a year ago due to operational safety concerns and the emergence of Ace.

The Ace is a sub-one tonne load light commercial vehicle with multiple variants, including a multi-seater commercial passenger vehicle known as Magic. Besides serving as the last mile option, such products are also used for more than four dozen-wide applications.

According to SIAM data, in the first half of this financial year, volumes of the Ace family grew by 13 per cent at 95,653 units as against 84,540 sold in the same period last year.

Tata Motors makes 45 different application on the Ace including water tanker, silt remover, mobile vegetarians shop, jet machine, quick service outlet, rural retail outlet, mobile hoarding to name a few. Several owners, the company says, have made their own creations on the vehicle over the years.

To further strengthen its hold on the market, Tata Motors will launch six new variants of the Ace and Magic, 2 or 3 variants each of the Magic Iris and Ace Zip and 2 variants of the Super Ace over the period of one year. Further, the company will also increase its dealership footprint in India to 2,000 in two years from 1,346 now.

The Super Ace, which is the 2 tonne load carrier vehicle, will see the addition of a common rail engine (DICOR) borrowed from the Tata Indica. This new addition will give the vehicle better drivability and performance and superior fuel-efficiency.

With the ban on entry of heavy vehicles in most cities, such light commercial vehicles are used as last mile transportation. Besides, Pisharody says demand for micro trucks is expected to continue in the next few years as more and more people are taking to self- employment. This may well be true as at least 60 per cent of Ace owners are semi-educated youth – first-time users – who have launched goods or passenger transport operations with their vehicles.

Tough competition
The competition, though, is not sitting quiet. Mumbai-based Mahindra & Mahindra, which launched the Maxximo, a sub-two tonne load carrier to take one the Ace promising better fuel economy, is said to be mulling a new Maxximo with a better payload capacity.

Mahindra does not have comparative product which can compete against the Tata Super Ace in the cargo segment presently. Sales of the Maxximo and Gio have fallen by 16 per cent even as there was a growth of two per cent in the first six months of the year.

Pravin Shah, chief executive (automotive division) M&M, says, “It continues to be an important segment. We have seen unprecedented growth in the last few years. I won’t be able to disclose our product plans but we are looking at a variety of incremental products having more than two tonne capacity.”

While M&M lacks comparative products (though it has pick-ups with higher payload) Ashok Leyland is struggling with its production capacity. The Chennai-based company’s light commercial vehicle ‘Dost’ is a runaway success, but the company is not able to expand markets in India due to limited capacity.

Nitin Seth, executive director marketing, LCV and Defence Business, Ashok Leyland says “Dost is priced at a premium of 10 per cent compared to the Super Ace and still we are able to satisfy demand. We are open only in nine states and are doing about 3,000 units a month. With expansion we will do about 4,000 units by next year but cannot add new variants of the Dost”.

The Ashok Leyland plant near Chennai will be able to produce only 50,000 units a year of the Dost at peak capacity. The company wishes to add new variants of the Dost, including a passenger variant but cannot do so at the existing plant. A new plant will become operational only after 24-30 months.