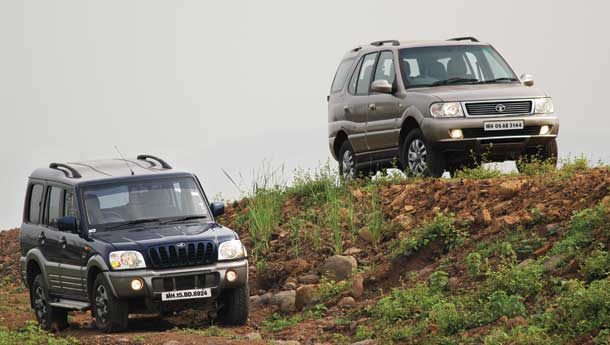 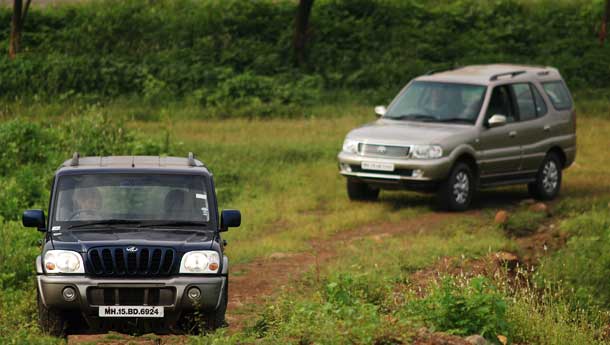 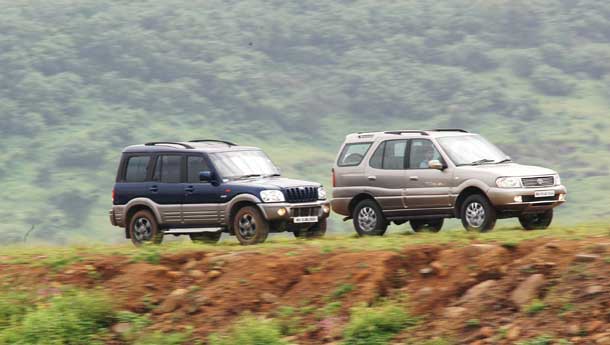 Look,' I explained patiently to Srini, 'I have good friends at both M&M and Tata Motors, and in the months to come, I am bound to get terrible phone calls, sulking sessions and death threats from that community... Shreenand is growing up to be a brilliant motoring journalist with great evaluation and writing skills, and his mentor Shumi, as we always knew, can be quick behind the wheel as well as a keyboard,' I politely added. 'So why on earth are these guys not writing this story? Grrr...'

Assistant editors can be a troublesome lot. He decided that these are important cars that I have spent considerable time with and it is imperative (big words, you see) that I compared them. Not fair, I say, but someone has to get his hands dirty, right?

Looks
The Safari is the older car here, but when parked next to the younger Scorpio, the facelifted Tata looks more contemporary. The Safari was designed by IAD, Sussex, UK before the firm was taken over by an ambitious Daewoo. It was a well designed product for its time and that has helped it age quite nicely. Plenty of curved windows and surfaces meant Tata had to go through a tough learning curve when it came to productionising the bits. The problem area today, as it was when the Safari was launched, is the stance – this car is way too tall for its track. The team that gave the facelift should get a raise since they had to operate under severe restrictions and yet came out trumps – the Dicor does look handsome despite panel gaps that can put piggy bank slots to shame. Clear-lens lights help things a bit, while brighter, simpler five-spoke alloys would have been a good idea. The smooth body panels cut from Korean dies way back in the last millennium deserve better fit and finish, which Tata fails to deliver even today.

On the other hand, the Scorpio is not part of the spit-and-polish brigade, and wears its panel gaps and the odd door hinge with pride. Mahindra had seen the Safari enough when they were developing the Scorpio and they refused to take the bait and went for a more down-to-earth approach to build what is essentially a common man's SUV. And that they did rather well. It is much more civilian than most Jeep clones, but it can never be seen in the same queue occupied by CR-Vs and Tucsons. The end result is a butch machine with straight-drop windows and a near vertical windshield. The seven-slat grille reflects Jeep genetics, but the clear-lens lighting (added at the last minute) easily brightens things up. The Scorpio does have a nice stance with fat wheels that fill up those plastic-clad wheel arches. But it is still Air Deccan while the Tata Safari is Jet Airways. You get the drift, right?

Interiors and comfort
The Safari has lot of goodies going for it but we were not impressed with the quality of plastics and surfaces in use. The second tone that covers the centre console is irritatingly staid and would have looked bad even in an eighties dump truck. There are switches and knobs scattered all around the console itself and the mess becomes complete with the mismatch of an audio system. Maybe Taco should have stepped in at an earlier stage to improve things inside the Dicor. And no, adding an analogue clock does not make it a Maserati by any stretch of illusion. The seats are good news – they are supportive and the leather-clad version looks and feels top-notch. I am not a big fan of DVD screens behind the headrests, but if it works towards getting a few new buyers, nothing wrong with it either. Yes, the rear view camera works well and is a boon when you are parking between your boss's Accord and your colleague's Santro. And the top-end models get split airconditioning, pioneered in India by the Qualis.

The Scorpio received new dials recently and a bit of improvement in the trim. Ergonomically, the Scorpio interior is a step behind the Safari, though the seats are supportive and good for long hauls. The arm-rests are not a good idea, since they sag and feature poor stitching. However, they are well executed in the Safari – you can wear your seat-belt even with the hand-rest lowered, which you cannot do with the Scorpio. Despite the efforts of Mahindra to soup up the interiors, it looks like it can do with a thorough overhaul sooner than later.

Tata Safari Dicor: *** Three stars
Mahindra Scorpio CRDe: ** Two stars   Performance
The biggest problem with the Safari was its under-powered engine and that was addressed – a tad too late in the day I must add – by the new 114 bhp 2956cc four-pot direct injection turbo-diesel motor that gets its block from the 207/407 family. The head features a Delphi developed common-rail injection unit that ensures that the motor meets the emission norms. Now I can understand that a lot of effort went into shoehorning this engine into the Safari, but the end result could have been better. As it stands today, the Safari balks when the clutch is dropped, manages to do 60 kph in 7.24 seconds and then takes an eternity (19.1 seconds) to reach 100 kph. While you can safely point your finger at poor gear ratios, it must be said that the car cruises better than its predecessor. Once the revs build up, the engine is more relaxed and dishes out performance as expected of a big-hearted motor. While the two-litre Safari used to struggle to keep 145 kph on the speedo, the new car does it easily. Driven with a light foot, the Dicor will return 10 kpl inside city limits and 12 kpl on highway runs. Engine noise is intrusive at most speeds, but the new car is at its best while cruising at 80-100 kph in fourth or fifth gear. In short, the new powertrain feels underdeveloped, and as a result, has not reached the promised land of yumping, sideways performance as shown in the beautifully made tele-commercials.

Surprise! The smaller engined direct injection motor of the Scorpio makes it a fun to drive car. The 115 bhp 2609cc engine is livelier and has gear ratios suited for most urban and highway driving duties. It is quicker than the Safari to 60 kph (6.13 seconds) and even quicker to reach 100 kph (17 seconds). The Scorpio powertrain was developed for the car and it works with the rest of the car to provide a better driving experience. Mahindras have been tweaking the motor and the gearbox every now and then, and that means most of the rough edges are now ironed out. It has got the power, refinement level (turbo-whine is intrusive, still) and reliability record going for it. And yes, the Scorpio consistently returns 12-13 kpl with the air-conditioner running. As far as fulfilling the product promise goes, the performance of the Scorpio is any day better than that of the Safari. Surprising but true.

Tata Safari Dicor: ** Two stars
Mahindra Scorpio CRDe: **** Four stars   Ride and handling
Both the machines ride well over Indian terrain, thanks to proven body-on-chassis construction. Now, the Safari never had much of a problem with handling, thanks to a nicely tuned coil on spring rear suspension setup as opposed to the leaf-springs on the Scorpio. With the added top-end performance, Tata engineers, in all probability, tampered with the suspension and power steering setup of the car. The result is a dynamic nightmare that rolls it way around 140 kph corners like a giant-wheel that has come off its moorings. There is too much body-roll to be safe, and I sincerely hope Tata Motors get their act together and register themselves with handling specialists like Lotus who can get to work at the Milbrook proving ground with the Safari. Even better, this will save cost too, if they revert to the original settings – even if that means the top-end performance needs to be reduced.

Ditto with the Scorpio. In the motoring journalists circle, we have a saying that 'no two Scorpios handle the same'. We hear Mahindras are working with a tyre major to get the handling sorted out, er... at Milbrook. So.

Verdict
The price comes into play here and that too big time. The top-end Scorpio, at Rs 7.93 lakh ex-showroom, is cheaper than the base LX trim Safari at Rs 7.98 lakh. If you want a handsome SUV minus the frills, then the Safari is worth a look at this price point. The Tata marketing chaps have outdone their engineering mates when they priced the leather, DVD, bells-and-whistles spec VX model with 4WD at Rs 13 lakh. For that price, you can almost get an Endeavour or a Tucson – the former is better built and the latter is more refined and car-like. And that leaves us with the basic Scorpio models that range between Rs 6.55 and 7.3 lakh. Now that I am destined to make enemies, I declare any of those Scorpio models clear winners.

You see, the Scorpio CRDe is a nice television serial that you may or may not watch, while the Safari Dicor is a Bollywood movie that ran out of budget – it has got the item numbers alright, but the entire cast comes together and get married to each other finally to end the movie quickly.