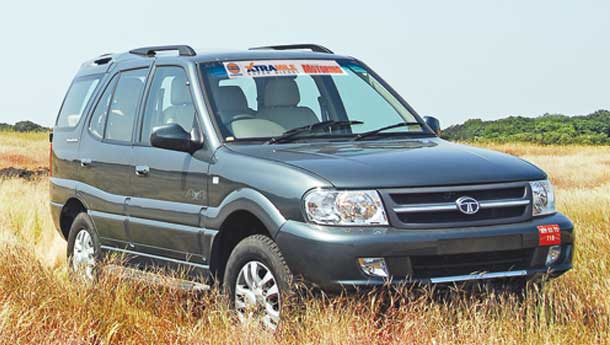 This is a Tata that I would recommend people to buy. Go ahead and bring on the best Scorpio from the Mahindra stable and you will realise that the new Safari Dicor can lick it in every possible parameter. Looks, fit and finish, power, economy, ride quality and handling – if not pricing. Am I jumping the gun? Did I fall off the bed? No dear reader, the biggest challenge to any motoring journalist is to start appreciating a machine which he has loathed almost all throughout his career.

Get strapped, since here is a pretty unusual story of how the development of a car can be completed over ten years. At a time when most cars end their life cycle, the Safari has reclaimed its life. Just. To appreciate this revival completely, some of you will need a small paragraph of history. It is also the story of how a truck major started building cars. It is a story full of promises, compromises and disastrous sales numbers and mighty success stories.

Some time back in the late eighties, Tata decided to learn, all by itself, how to make a car. They thought the best way to do it was to downsize what they knew best – body-on-chassis trucks. The Tata 207 or Tatamobile pickup project was powered by a refined yet underpowered 2000cc diesel four-pot motor. The same went on to power the Sierra, the first ever home-bred SUV in India. Forget the electrical glitches and fit and finish issues, the engine was refined for a diesel and adequate to move the mass. The same motor created history when it powered the Sumo, a runaway success for Tata.  However, by the time the Safari was launched (designed and developed by IAD, UK which would later become Daewoo Worthing Technical Centre) ten years later, 90 bhp and 19 kgm of torque was grossly inadequate to power what looked like a contemporary SUV. But again, it was refined and reliable enough. Sales of the Safari never went through the roof and Tata, now focusing on mass produced monocoques, took its own time addressing the issues with the Safari.

It took almost five years for the plastic body cladding of the Safari to look clean and production worthy. Electrical problems were taken care of and overall fit and finish improved. But the car never got a more powerful engine. Yes it did with a petrol powerpack – but it had its share of drinking problems. Then two years back, someone decided to plonk a direct injection diesel from the 407 truck into the engine bay of the slick SUV. They had done the same thing to the Sumo with relative success, so why not? The ensuing Dicor must rank as the worst car ever produced by Tata. A brilliant commercial and the ‘Reclaim Your Life’ tagline notwithstanding, this was a product that was so far away from the original product brief that we could not imagine someone senior in Tata Motors sending it to a production line. But the car did reasonably well, with the Safari notching up its biggest numbers in the last two years. But those numbers were not comparable to what Mahindra was doing with the Scorpio.

That Dicor motor was the last nail. Or so we thought when we tested the car. The engine would refuse to rev beyond 3000 rpm and the rest of the car was shoddy too. But somewhere in the backroom development centre at Pimpri, Pune, Tata was developing a smaller Dicor motor that would cream the truck motor when it came to power, torque and refinement. Enter the 2.2 VTT (yup, a variable geometry turbo) Dicor that is the heart of the new Safari and this story.

Let us get on with the road test then.

Looks
The Safari was never a bad looker. It did have its oddball dimensions – way too tall on profile, too narrow when seen front-on and stubby when seen from the rear three-quarters. But as an overall form, it looked like a capable SUV way back in 1997 and, surprisingly, it does not look all that old even today. I am not mincing words here – it is more handsome than the Scorpio and the Chevrolet Tavera. Alright, it is not in the league of the Honda CR-V and not even the Ford Endeavour, still. What is important to note is the fact that fit and finish levels have improved considerably. Better quality plastic bits, consistent panel gaps and very good paint finish are all attributes of Safaris these days.

Keeping a tight leash on costs means the cosmetic changes include only a new grille – which is nicely executed. Gone are the chrome slashes of the old Dicor and in comes a sobered-down job with a plastic honeycomb and a thin slice of chrome. And yes, the Safari is one car that has got used to the idea of clear lens lighting fixtures. Negative points for plastic shrouding that covers the hinges of the rear door and for those extremely cheap plastic stickers used to differentiate the 2.2 VTT Dicor from the older models – such stickers are better used to say ‘frost free’ on refrigerators. It is unfortunate that a car company of the stature of Tata is losing it when it comes to attention to detail.
Looks: ****

Interior and comfort
You cannot put a well thought out product down – even a decade down the line. The Safari interior is not as big as it looks from the outside but there is space for four – when we’re talking space, we are talking well-fed adults. A fifth passenger on the second row and two unfortunate kids on the jump seats are also a possibility. The test car, a 4x4 VX version, came wrapped in leather, with a comprehensive audio/video entertainment system and a trick rear-view camera. Ergonomics can be termed iffy if you are used to CR-Vs but the Safari offers comfortable seats and a decent driving environment. There is ample room for second row occupants too. Climbing aboard is easy thanks to a neatly fabricated running-board, but the same becomes a hurdle when you want to get off in a hurry. I personally am against dials without accurate calibration, but some of you might like it. The same ‘clean dial’ theme is carried on to the little clock on the dashboard as well. Overall, the look, feel and smell of things inside is good but not enough to justify the Rs 11.58 lakh ex-showroom price tag the car commands. But the spec list is all right for base and mid-level models and compares very well with what the competition has on offer.
Interior and comfort: ***

Engine and performance
Here comes the big improvement and one that deserves credit. The 2179cc 16-valve four-cylinder common rail diesel engine is new and is breathed on by a variable turbine turbocharger. Impressive numbers on paper means 140 bhp and 32 kgm of torque. More importantly, this smaller engine (compared to the three-litre Dicor) has a flat torque curve that makes it more driveable throughout the rev range.Forget driveability and listen to the engine at idle. It sounds like a civilised motor and not a truck engine in disguise to begin with. The gearbox is still not the slickest in the business, but go through the gears with precision and the new powerhouse of an engine will churn out a time of 6.5 seconds for a 60 kph run and 16 seconds for a 0-100 kph sprint. That is a whole second quicker than the earlier Dicor to 60 kph and a whopping 3.5 seconds quicker to 100 kph. The performance benefits of the engine change become more glaring when you consider mid-range performance – the new car dismisses the 80-120 kph run five seconds quicker (the old one refused to go beyond 3000 clicks, mind you). The test car featured ABS and electronic brake distribution, which gives you confidence to actually use the newfound performance of the Safari.

What those numbers won’t tell you is how refined a progress you will be making when you drive the new Safari. Despite VTT, the car suffers from a spot of turbo lag here and there (very prominent while climbing a mountain road with a full load of passengers), but once you get the hang of not losing out revs and shifting-on-the-boil, things get livelier. Tata engineers have worked hard at ensuring that the whole powertrain – from crank to axle – was developed as a whole so that the refinement you get is different from a  Middle East peace proposal.

Stretch its leg a bit and the new Safari will do a top whack of 154.3 kph – an improvement of over 10 kph from the first ever Safari. I would have imagined all those 140 horses to give the car a 160 kph plus performance, but then the dynamics team would have had to work through their summer holidays to make the Safari behave. We will come to handling soon, but for the time being, stand up and applaud the powertrain guys at Tata and AVL – a job well done indeed.
Engine & performance: ****

Ride and handling
Despite its tall stance and relatively narrow track, the Safari was not all that bad a handler to begin with. And the ride quality was actually very good over a host of surfaces. But as we have seen with some other home-bred cars, such virtues may go out of the window over the lifetime of a product. Luckily, that has not happened with the Safari. So the wishbones up front and the five-link rear with coil-over spring setup at the rear give the car adequate handling prowess – at least enough to handle all the newfound enthusiasm under its hood. Enter a reducing radius corner at 110-120 kph and you’ve got to have the fitness of the captain of a Viking ship to handle the ensuing body roll, though – so it is preferable not to challenge the laws of motion with one of these machines. The new tubeless radials (Bridgestones in our test car) communicate better with the driver and this helps with on-road behaviour in a big way. The steering feels very dated in comparison but then you cannot change everything in a car on a revamp budget, can you?

The good old Borg-Warner shift-on-the-fly 4x4 system works well and makes the Safari an all-weather car if not the mud-plugger that the Scorpio is. We did try out the low-ratio, as we took the test car across some rugged terrain for the pics you see here, and it worked as well as ever.
Ride and handling: ****

Verdict time
Tata Motors is not new to revamps. But this time they have outdone themselves and have breathed life into a product that always deserved better sales numbers. The 2.2 VTT powerplant is available on five variants and the list prices start at Rs 7.16 lakh ex-showroom Mumbai. At that price point, you don’t get an X-mas tree as standard equipment as you would have figured. But you still get the new motor and that means it should be considered if you are in the market for an affordable SUV.

As for the top-end models, you cannot really rationalise spending close to Rs 13 lakh (on road) for a decade old car – but you do get two airbags, ABS and lots of monitors, including a reverse guide system that will impress a few.Any way you look at it, the Safari is now making a compelling case for itself and we do recommend a buy. And we don’t have to look at the new two-year, 75,000 km warranty to do that. Congratulations Tata Motors, for the simple yet splendid act of keeping faith.