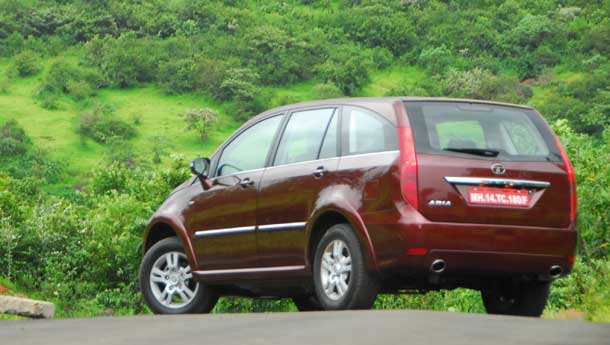 Tata Motors aims to raise its market share in the utility vehicles segment in Gujarat from a current 12 per cent thanks to the launch of its latest cross-over vehicle Tata Aria.

S G Saxena, utility vehicle product group head, Tata Motors passenger car unit said here at the launch of Tata Aria, "Currently, around seven to eight per cent of our utility vehicles(UV) sales comes from Gujarat. Through this new premium product we are confident of enhancing our play in the UV segment significantly." He, however,did not divulge detailed target figures.

The company enjoys an overall 13 per cent market share in the UV segment across the country which comprises 17 per cent of the net sales of the auto industry. Around 1.54 lakh vehicles have been sold in the segment in the first six months of this fiscal, clocking a 21 per cent growth rate on a year-on-year basis. The segment growth is likely to moderate to around 12 per cent for the next six months, claimed Saxena, as the first half numbers are high on the back of base effect compared to corresponding period last fiscal.

Tata Motors, on the other hand, has managed to grow at a rate higher than the industry average, at 22 per cent so far this fiscal. The company sold 19,100 UVs in the first half of the year.

Tata Motors is betting big on the Aria as it is the first premium UV from the company's stable having the interiors of a sedan and the exteriors like a sports utility vehicle(SUV). It will be pitted against the likes of the Toyota Fortuner, Honda CRV and the Mitsubishi Outlander in the Indian market. Saxena said, "The competition cars are imported into India as completely built units(CBUs), and thereby attracting a huge duty. We have an advantage in this regard and hope to crack the market soon".