The silence of the acclaimed  Buddh International Formula 1 Circuit in Greater Noida will be once gain broken but this time by roar of  mammoth engines of  heavy modified trucks on March 23. Six racing behemoths weighing about six tonnes each will burst into sight during the T1 PRIMA Truck racing championship being introduced  in the country for the first time by Tata Motors. 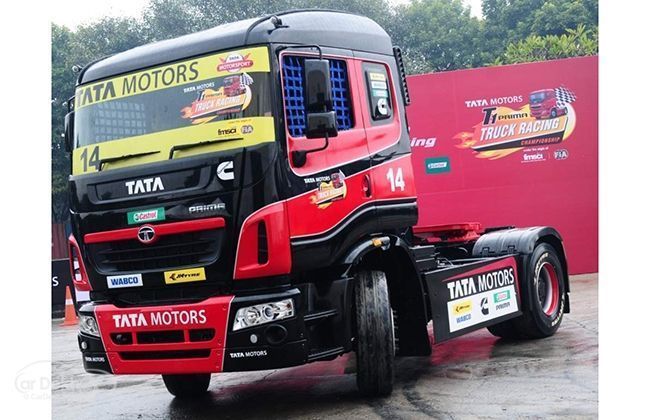 This is the spectacle fans will be treated to as the event will be the first-ever truck racing championship to be held in India and marks another small step forward for Indian motorsport as the country increasingly asserts itself on the global motor-racing stage. The series, spanning two days, (day one March 22 will be dedicated to media) will use Six heavily-modified Tata Prima beasts capable of putting out 370 horsepower and reaching a top speed of 110 kilometers per hour driven by international drivers.

The first ever truck racing championship in India, has been inscribed on the calendars of FIA (Federation Internationale de l’Automobile) and FMSCI (the Federation of Motor Sports Clubs of India). Event is being managed by T.I.C.

The T1 Prima Truck Racing Championship is being organised by Madras Motor Sports Club of India (MMSCI), with safety and performance standards being followed as per (BTRA) British Truck Racing Association guidelines. Each truck/team is owned by a principal sponsorer. There will be total of 12 races featuring Tata Prima racing trucks, Commercial and Passenger vehicles. Each race will cover 15 laps.

The truck drivers will be of International acclaim and foreign nationals besides Indian drivers especially trained for the event . The main highlights of the Tata Motors T1 Truck racing will be gala opening and closing ceremony with host of  celebrities like Mika, Salim Sulamain,Sivamani & Sanjay Shetty’s troupe of dancers performing, Bollywood personalities, Truck exhibition, merchandise shops, test drives on trucks for the public & media , food court with kid's fun zone. Designer Manish Arora has been roped in to do art work on some trucks and have a fashion show as a part of the event.

The entire T1 race has been planned and is being executed by well known Integrated event management and marketing company T.I.C headquartered in Delhi.

Making safety changes in the Buddh International F1 Circuit, acclaimed to be the best race circuit in India, will host the inaugural T1 Prima Truck Racing Championship. On the Race day, there will be two races. The first one a qualifier race, followed by the main

The Truck Racing , a highly popular International sport worldwide since  1979. Tata Motors wanted to bring this popular racing sport to India and the major challenge for T.I.C. was to arrange for global famed Truck driving champions convincing them, designing the trucks at international level.

To make these Prima trucks fit for racing, 22 key modifications were made to meet a mix of safety and performance needs as per guidelines from British Truck Racing Association. These included significant changes in fuel tank, brake cooling system, propeller shaft guards, racing seats and safety belts, exhaust, steering wheel among others. The trucks have gone through multiple quality checks and also tested on the test circuit at Jamshedpur for high speed run and control.

Both the organisers TATA Motors  & the event management company TIC executing the T1 championship have a challenging task at hand to bring to life this spectacle for the Indian audience.