Farmers’ protests against Tata Motors’ factory in West Bengal in 2008 had forced the company to relocate its plant to ‘industry-friendly’ Gujarat. Now, with thousands of farmers claiming that they are being displaced by rapid land acquisition for industry in Gujarat, the story seems to be taking a new turn.

Almost all recent labour strikes were declared illegal by the labour department of Gujarat. These include strikes at the General Motors plant in 2011, Reliance Industries textile unit in 2012, Arvind’s Ahmedabad unit in 2012, the Apollo Tyres unit in November 2012 and Larsen & Toubro’s Hazira plant in 2013.

“Gujarat does not have an agriculture policy, but it has an industrial policy,” said Sagar Rabari, secretary, Gujarat Khedut Samaj.

Rabari plans to move the Gujarat High Court to question the government’s decision to prohibit the ongoing strike at Tata Motors’ Sanand plant. 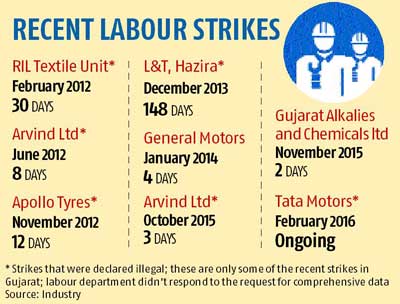 Congress leader Arjun Modwadia said, “There is no problem with being industry friendly, but one cannot be anti-worker.”

“It is the government’s duty to mediate between industry and labour, but the state government has been taking the side of industry,” Modwadia added.

When industrialisation began in Gujarat in the early 1900s, textile mill owners could hardly find workers. They had to provide accommodation to woo workers and most of the ‘chawls’ in Ahmedabad were built by mill owners, explained Vidyut Joshi, former director, Centre for Social Studies, South Gujarat University.

One of the first instances of industrial unrest in Gujarat was in the early 1980s when textile workers had gone on a strike demanding higher wages. Around that time Gujarat had seen the rise of several labour leaders who were also influential in state politics: Sanat Mehta, Navinchandra Barot, Natwarlal Shah and Ashok Bhatt. This legacy has waned and now there is no prominent labour leader in the Gujarat Assembly.

The level of unionisation among workers in Gujarat is also low. Officials in the state labour department admit this is a problem. “With no official channel to negotiate their demands, workers resort to flash strikes,” said an official.

“In a way, workers lost their umbrella, and increasing pressure to make labour laws industry-friendly led to convenient changes in the laws and practices of the state,” Joshi said.

Of this, the transition that holds the key to recent workers’ unrest in the state is the rise of contract labour. In the past decade, industry has moved overwhelmingly to hiring migrant labourers from Bihar and Orissa on contractual basis. There were seven million contract workers of the total twelve million industrial workers in the state, said Nihil Mehta, president of the Gujarat wing of Indian National Trade Union Congress. Contract workers are paid between Rs 4,000 and Rs 6,500 a month, he said.

The state’s minimum wages are Rs 7,000 a month for skilled workers. “Every three years, workers expect a good revision. When that does not happen, they resort to strikes,” said the labour department official. However, he disagreed with Mehta on the number of contract workers. “Contract workers should be about 30 per cent of the labour force,” he said.

On March 10, all the major trade unions that have some representation in the state will hold a demonstration at Ahmedabad’s Lal Darwaza area to protest against the labour reforms initiated by the state government