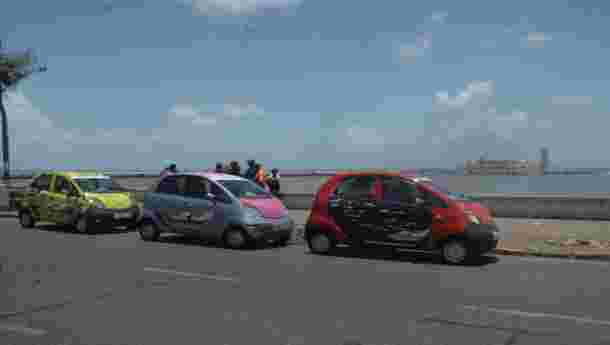 The Tata Nano Superdrive, which was flagged off from Sanand in Gujarat on June 2 reached Mumbai late on Sunday. This was followed by a drive by the cars to Pune yesterday and will be headed to Goa today.

Three Nanos, part of the convoy heading down south to Kochi via Goa, Bangalore, Chennai and Coimbatore were flagged off by Ratan Tata from the Nano's mother plant last Wednesday and is part of three convoys heading in three different directions. The other two convoys of three Nanos each is headed towards Eastern India and Northern India respectively.

BS Motoring is participating in this drive and will cover the leg beginning from Pune today till Goa, where the convoy is expected to reach "The State of Mind".

Look out for a full-blown exclusive coverage of the drive from this leg, by our intrepid reporters Vaishali and Aneesh, tomorrow only on www.bsmotoring.com