Seeing the success story of AMT gearbox, the homegrown car manufacturer Tata Motors will soon launch Nano with AMT gearbox. Our recent spy shots from the Tata’s manufacturing plant in Sanand plant suggests that the Tata Nano AMT is waiting to be dispatched to dealers. We earlier reported that India’s most affordable hatch will now have a openable boot with a handle provided at the back along with a hole to insert key as well. The hatch also bears an F-Tronic and XTA badge and flaunts a redesigned rear bumper. The AMT aka Automated Manual Transmission is the same set of gearbox that also does duty in Maruti Celerio and Alto K10 hatchbacks sourced from FCA owned spare part maker Magnetti Marelli.

Tata Motors working hard to improve the sales of its Nano hatch as on the exterior front, the AMT model will now gets a honeycomb grille, redesigned headlamp cluster, new bumpers. On inside the hatch now gets power steering feature (EPAS) along with some minor modifications. 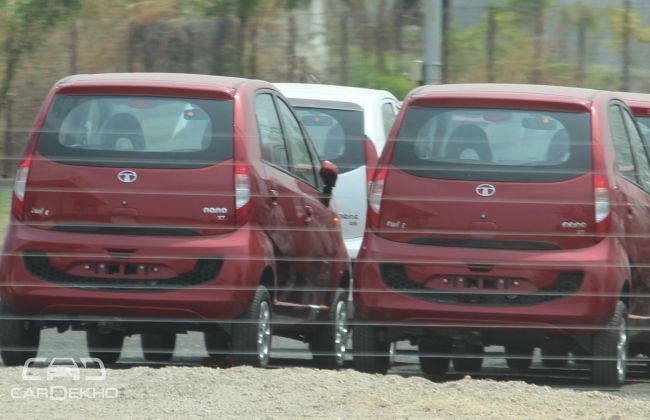 Under the hood, the car is powered from the same 0.6-litre petrol engine which gives an output of 37.5bhp and torque of 51Nm. With AMT doing the duty of shifting the gears, we expect Nano AMT to deliver more fuel econmy.

The car would get power from the same 625cc 2-cylinder engine that produces 37.5bhp and peak torque rated at 51Nm. With AMT under the hood, we might see slight increase in the mileage figure.