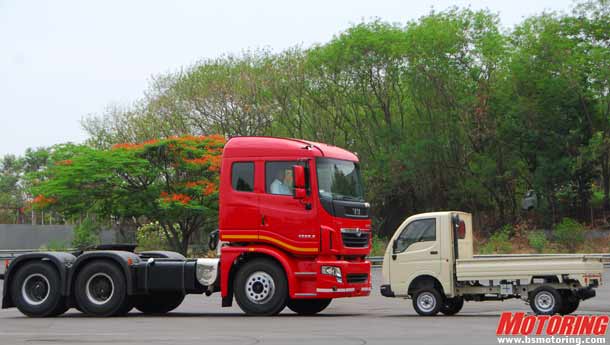 Tata Motors Ltd, the country’s largest auto maker, is developing a new line of fuel-efficient trucks and buses to fend off competition from bigger global rivals. It is also planning to upgrade its passenger car models and introduce new ones to reverse the company’s sliding market share in this segment, Chairman Ratan Tata has said.

“In the coming years, Tata Motors’ predominance in commercial vehicles will be challenged by the entry of international brands like Mercedes-Benz, Volvo and Navistar, which have all entered or are in the process of entering India,” Tata said in the company’s 67th annual report.

“A new line of very competitive, fuel-efficient vehicles is being developed by Tata Motors to meet the competition head-on,” he noted in the report, released on Friday.

“In passenger cars, Tata Motors will face even greater competition. The company will need to address the marketplace more effectively with its existing and future products in order to regain the level of market share that it earlier enjoyed,” Tata added.

Market share of the company’s commercial vehicles (CV) has been under pressure since the past two years. The country’s biggest CV maker’s market share declined to 59 per cent last financial year from 64 per cent two years ago.

Similarly, with the introduction of new passenger car models by Volkswagen, Skoda Auto, Mahindra and Mahindra Ltd, Nissan Motor Co Ltd and Maruti Suzuki India Ltd, the share of Tata Motors’ own range declined to 13 per cent last year from 14 per cent in 2009-10.

“The company faces competition from various domestic and foreign auto manufacturers. These companies have either formed joint-ventures with local partners or have established independently-owned operations in India. The global competitors bring international experience, global scale, advanced technology and significant financial support, for operations in India. The competition is likely to further intensify in the future,” the report said.

Though sales in the mid-size segment increased 18 per cent, Tata Motors and Fiat Industrial sales in the same segment declined 49 per cent last financial year, resulting in a fall in market share to 9.6 per cent from 22 per cent. Tata Motors sells the Indigo range, while Fiat sells the Linea in this segment.

Further, the company which also owns the two UK-based luxury brands, Jaguar and Land Rover (JLR), is expecting the current financial slowdown in the western world to have an impact on sales of the two brands. JLR contributes to 60 per cent of Tata Motors’ total sales and about 90 per cent of net profit.

Though the company is expanding its presence in China, which is pegged to displace the US as JLR’s second single largest market, and in Brazil and Russia, it believes such efforts will be insufficient to counter-balance the impact of the total slowdown.

“The company’s strategy with respect to JLR operations, which includes new product launches and expansion into growing markets such as China, Russia and Brazil, may not be sufficient to mitigate the decrease in demand for the products in established markets and this could have a significant adverse impact on the financial performance,” added the report.

Tata Motors also said it had undertaken its most ambitious product development programme in its history for JLR, and would launch several new sports sedans and sports cars in the next two years to provide dealers with a more competitive and wider product range.

“The company will also be offering cars with new higher-powered, more fuel-efficient engines to meet the customer preferences,” Tata added. “Face-lifted and new models of the Range Rover, as well as a competitively-priced new line of rugged, lifestyle vehicles under the Land Rover brand are also scheduled to be launched. New manufacturing facilities are being considered in China to better meet market demand for Jaguar and Range Rover in the region.”