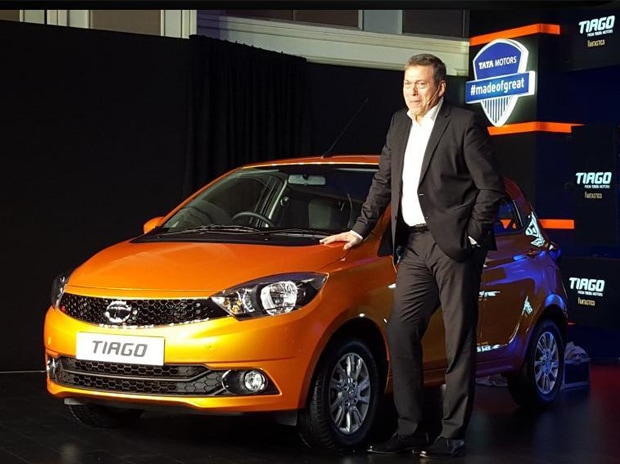 Tata Motors’ car factory at Sanand, close to this city, is working to reduce the waiting period of its latest hatchback, the Tiago, before it starts producing the sedan variant on the same platform.

The country’s largest automobile firm is again in the news after Tata Motors’ most discussed project, the Nano car, came for adverse comment  from the group’s former chairman after his recent dismissal. The Tatas shifted to Sanand primarily to make the Nano.


A source in the know indicated the company had so far delivered close to 25,000 Tiagos of an overall booking of around 50,000. In fact, the source claimed, “There is a clear direction from the management to ramp up the production of the car, which has been well received by the market, and reduce the waiting period.”


Another source indicated Sanand would also be making a sedan variant on the same Tiago platform. “Its launch might get slightly delayed as the plant is working to reduce the Tiago wait period. Sanand is making close to 5,000 Tiagos a month now, up significantly from the 3,000 a month it was making a couple of months earlier,” he said, wanting to not be named. The plan is to further raise output.


The company had planned to bring out the sedan variant around the festive season but it is now expected to be launched around January. There are also plans to develop a cross-over vehicle based on the Tiago platform that would be made at Sanand. Earlier named the Zica Aktiv, it was shown at the Auto Expo 2016 in Delhi.


Utilising Sanand to make other products was what the company had planned after overall plant utilisation had dipped to around 10 per cent, prior to the Tiago’s launch.


In response to Business Standard queries, a Tata Motors spokesperson said, “The hatchback segment is very important for us. The regulations and customer preferences are going to play a major role in defining various sub-segments within this segment. We already have a well-defined approved PV (passenger vehicle) strategy in place that will look at not only the best way of addressing the segments’ requirements but an overall perspective of the portfolio, and you will see action happening from our side.”


Tata Sons’ former chairman Cyrus Mistry had said the Nano had been a loss making venture, with the product consistently losing money, peaking at Rs 1,000 crore. “As there is no line of sight to profitability for the Nano, any turnaround strategy for the company requires shutting it down," Mistry had said in a letter to the Tata Sons board last week.


He had said “emotional reasons” had kept the company from shutting the project.

Tata Motors has told the BSE exchange that investment in the Sanand unit was made to produce 250,000 units a year but the volumes did not materialise. It admitted the Nano was loss-making.


However, in the filing, the company said: “A major part of the investments in the factory are capable of being utilised for other products, as is evident from the production of the company's Tiago cars in the same factory.”


As far as development cost and investments in Nano-specific dies and toolings are concerned, these have been significantly written off, in line with the accounting policies over several years, Tata Motors claimed.


As a part of its future product strategy that has been approved by the board of directors, the company has decided to focus on growing more attractive-looking segments.


A Mumbai-based analyst said that it is estimated that since the beginning, the Nano project had lost in excess of Rs 6,000 crore; its fate was almost sealed. “The company as such should not invest further on product development on the Nano but in terms of strategy, it has made the right decision to utilise the investments made in the plant to make other products,” he said.


From a low of 10 per cent, the plant’s utilisation has moved up to around 25 per cent (considering 60,000 Tiagos per annum and a couple of thousand Nanos). With new vehicles lined up for launch, this is expected to improve.