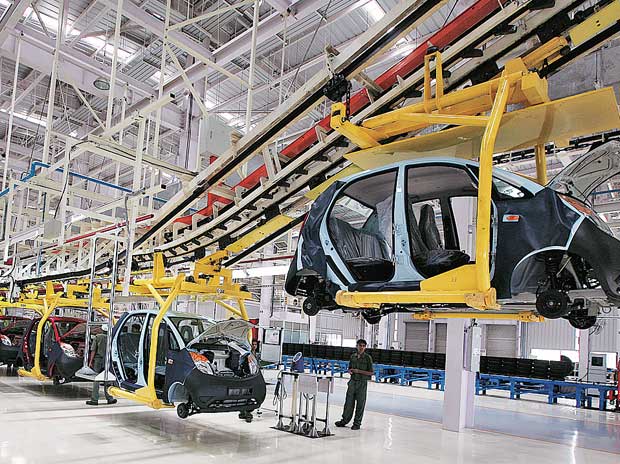 As it eyes the number 3 slot in the Indian passenger vehicle space, Tata Motors' Sanand factory is set to work at full throttle. Once functioning at only 20-25 per cent of its installed capacity, the plant is soon expected to touch a production volume of 10,000-12,000 cars per month across three models.


The Sanand plant is expected to operate at full capacity by the end of financial year 2017-18, said Mayank Pareek, president, passenger vehicle division of Tata Motors. Speaking on the sidelines of the launch of the Tata Tigor compact sedan, Pareek said the Sanand plant produced around 60,000 vehicles last financial year, including Tiago hatchback and the Nano.


“Plant capacity is a dynamic thing. It depends on what product and what variants are being produced. However, we plan to scale up the production to 10,000-12,000 units per month within the next few months, and expect that Sanand would function in full capacity within the current fiscal,” he said.


The Tiago, launched at an attractive price, turned the tables for Tata Motors and also for the Sanand factory. By June 2016, within two months of its launch, the car had managed to garner 20,000 bookings and the Sanand plant rolled out the 10,000th car in June last year. In fact, the site started working in two-shifts to meet the growing demand.


By November last year, the car had garnered 50,000 bookings and Tata Motors had managed to deliver around half that number. This is when the company stepped on the gas, and started working on reducing the wait period for the car which had swelled up to more than three to four months by then.


Sources indicated Tata Motors chose to defer the launch of the sedan variant on the Tiago platform (Tigor) to reduce the wait period. Now that Tigor has also been launched at an attractive price, the company is expecting good traction from the car, thus enhancing the Sanand plant capacity utilisation.


In fact, with the Tigor the company aims to attract buyers of both compact sedans as well as premium hatchbacks. Having priced it aggressively at Rs 4.7 lakh ex-showroom for the entry-level model, the firm is aiming at a much larger market of  90,000-100,000 units per month (compact sedans and hatchbacks).


Nano production, however, is in slow lane, and the firm produced only 490 Nanos in February this year according to data from the Society of Indian Automobile Manufacturers.  Of late, Tata Motors has seen its car demand going up, registering 84 per cent year-on-year growth in March this year banking on Hexa and Tiago.