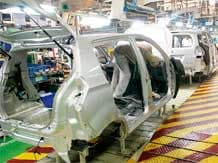 Car production at both plants of Maruti Suzuki remained suspended for the second day owing to stoppage in supply of AC units from Subros. Maruti, which produces 5,000 vehicles every day, had stopped production on Monday afternoon. The Sunday fire has badly damaged the Subros plant at Manesar, Haryana. Maruti and Subros are working together to resume supplies from Subros' other plants. Maruti's stock price, which had declined 1.65 per cent at BSE on Monday, gained 2.33 per cent to close at Rs 4,167.90.

The loss of production will impact Maruti's sales performance in May. In May 2015, Maruti's domestic sales grew 13 per cent YoY to 102,359 units. Maruti's performance will also impact the industry's growth in May since the company has a 48 per cent share in domestic passenger vehicle market.

In February, Maruti had lost two days of production or about 10,000 units, due to the component supply disruption created by the Jat agitation in various parts of Haryana. The company was forced to shut operations at both its plants -- Gurgaon and Manesar -- in Haryana.