The Tata Motors stock gained 19 per cent in trade on Thursday, on reports that production levels in its subsidiary Jaguar Land Rover’s (JLR’s) China plant have recovered to 75 per cent-levels.

JLR operates the plant under a joint venture with Chery Automobile Co. The scaling-up of operations comes as a relief, given auto sales in China had dropped 80 per cent year-on-year in February and 40 per cent in March.

The China Passenger Cars Association indicated that car sales have been on the uptrend since April 20 and sales for the month should end at the year-ago levels.

JLR, in a recent press release, had indicated that it was beginning to see recovery in vehicle sales in China, and customers were coming back to showrooms. The firm announced it will gradually resume production at its UK unit in Solihull, as well as in Slovakia and Austria from May 18.

Investors, however, should be cautious, given the improvement in China sales is coming off a low base in the year-ago period. There is pent-up demand and volumes in April have been aided by stimulus measures. 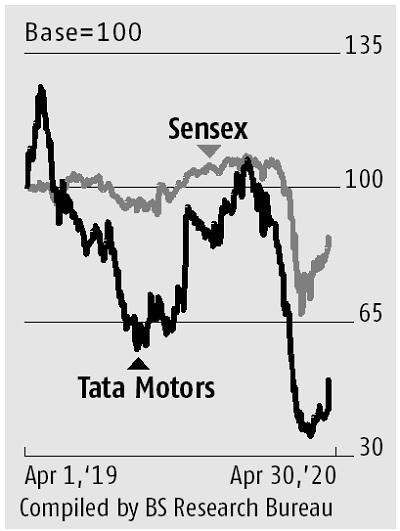 Sustainability of the volume uptick is critical, given the slowdown in China, says an analyst at a domestic brokerage.


While recovery in China is a positive, the overall growth for JLR is still a worry, given the muted growth forecasts for its other core markets of the US, the UK and the European Union (EU).


Passenger volumes are expected to fall by 17-25 per cent in the US and the EU for calendar year 2020.

ALSO READ: HUL's Q4 numbers a warning signal for those investing in the FMCG sector

Analysts at Nomura expect JLR to get impacted significantly as the EU and the UK account for 23 per cent each of its revenues and the company has low luxury passenger vehicle market share of 7 per cent.  Though liquidity is not an issue with JLR, given cash in balance sheet of £3.9 billion, analysts at JPMorgan expect cash burn of over £2 billion over the next two years. This will push out any hopes of being free cash flow neutral to 2022-23. Further, with domestic commercial vehicle sales getting into extreme slowdown territory, there is little solace — even from Indian operations.


Despite the gains on Thursday, the stock is still 53 per cent lower than its January highs. Given the muted volume expectations across markets — barring China — and cash burn over the next few quarters, it is not yet time to hitch a ride on the Tata Motors stock.