The consolidated income from operations at the firm rose to Rs 912.79 billion over Rs 787.46 billion in the year-ago quarter. The earnings are not strictly comparable due to the implementation of goods and services tax from July, after which the revenue from operations was reported net of GST. Tata Motors also suffered a one-off loss of Rs 16.41 billion for undisclosed product development programmes that was part of its work-in-progress capital. 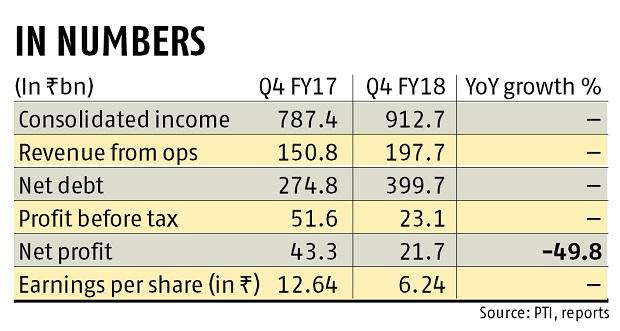 Jaguar Land Rover (JLR) sales fell 3.8 per cent over the period, coming off record sales in 2017. About 90 per cent of JLR sales in Britain are diesel models, compared with around 45 per cent globally. JLR’s net revenue for the quarter increased 4 per cent to Rs 75.55 billion over a year ago, while its profit before tax dropped to Rs 3.64 billion.

JLR has been able to deliver despite tough conditions, JLR Chief Executive Officer Ralph Speth said. “Despite external headwinds, these results reflect the underlying strengths of JLR. Sales have reached a new high, as strong demand in our key overseas markets offset the challenging conditions in the UK and other parts of Europe,” he said.


JLR’s sales have taken a hit in the UK and Europe due to combination of factors that included uncertainty from Brexit, higher taxation on diesel cars in the region and disruption in the market from electric, connected and autonomous technologies. The maker of Jaguar F-PACE model and Range Rover Evoque has outlined an investment of £4.5 billion for 2018-19.


“It was a decent quarter after adjusting for accounting changes owing to fit for change charges. However, an increase in capex guidance in a challenging environment would be seen negatively,” said Nitesh Sharma, an analyst at Phillip Capital India.


The performance of the standalone entity was a bright spot in the dull quarter. Net loss at the maker of the Tiago and Hexa models narrowed to Rs 4.99 billion from Rs 8.05 billion in the same quarter a year-ago.


The entity generated a free cash flow of Rs 13.8 billion for the year that ended in March 2018 after a hiatus of five years, P B Balaji, chief financial officer, Tata Motors group, said. Standalone revenue from operations for the quarter was at Rs 197.79 billion. It was at Rs 150.8 billion in the year-ago period.


“FY18 has been a hallmark year for Tata Motors with a record sales performance, increase in market share and the standalone business turning profitable before one-time exceptional charges,” said Guenter Butschek, MD and CEO, Tata Motors.