Tata Motors, the country’s largest automobile company by revenue, has seen its consolidated net profit shrink by 96 per cent in the third quarter on a steep decline in profit at its overseas unit Jaguar Land Rover (JLR) and higher losses in domestic operations.


With consolidated net profits of just Rs 111.57 crore, the October-December quarter has been the worst for the company this financial year.


The decline is higher than what was expected. Polls of analysts had suggested that the fall will be in the range of 25-35 per cent. The company had reported consolidated profits of Rs 2,953 crore in the third quarter (Q3) of FY16. The October-December quarter was significant because it was marked by the exit of Cyrus Mistry, former chairman, and allegations and counter-allegations between the Mistry and Tata camps on the way businesses are run.


The company’s consolidated sales during the quarter were down about two per cent to Rs 67,864.95 crore. Tata Motors’ stock price slipped to close at Rs 486.80 on BSE, down 3.68 per cent from the previous day. Its market value at BSE was down Rs 6,000 crore compared to Monday.


Tata Motors-owned JLR, the UK’s largest car manufacturer that also brings the bulk of the company’s bottom line, earned profits of 167 million pounds during the quarter, down by a steep 62 per cent from 440 million pounds. This was on account of unfavourable foreign exchanges, higher marketing expenses and depreciation and amortisation, the company said. Revenues, however, rose 13 per cent to 6,537 million pounds.


A more disappointing performance was in India, where the company manufactures commercial and passenger vehicles for its domestic and export markets. The standalone (domestic) revenue (net of excise) was up by a marginal 1.47 per cent to Rs 10,167 crore. However, the loss widened manifold to Rs 1,046 crore compared to just Rs 137 crore in the corresponding period of last year. The company said marketing expenses remained high in the industry and material costs were going up. 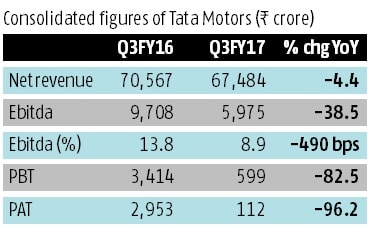 In spite of a growing passenger vehicle business on the back of new products like the Tiago, domestic operations have suffered due to a decline in the commercial vehicles (CVs) volumes. The company said its medium and heavy CV business witnessed 'major pressure' with a drop of nine per cent in Q3 owing to demonetisation. The passenger vehicle volumes improved by 25 per cent. The light commercial vehicles saw flat volumes.

The April-December consolidated profits of Tata Motors have halved to Rs 3,220 crore against Rs 6,467 crore in the corresponding period of FY16. The consolidate revenue in the first nine months of the year rose 3.6 per cent to Rs 199,429 crore.


Tata Motors has been working to improve its rank in the domestic passenger vehicle business from fourth position to third. It has also been active in the commercial vehicle segment (launching new products), in which rivals such as Mahindra & Mahindra and Ashok Leyland have been giving a tough competition. The company is introducing a leaner management structure by bringing down the number of layers.


Early this month, the company said it would launch a sub-brand called TAMO as an open platform to collaborate with technology partners to roll out niche products.