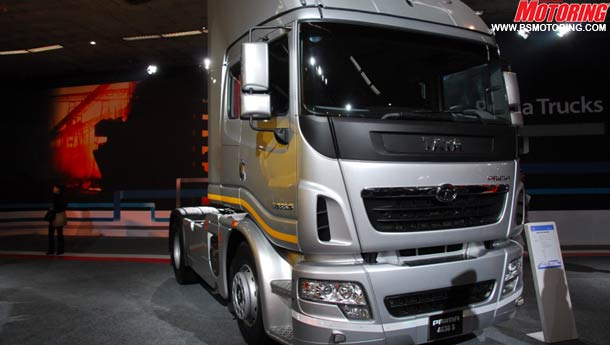 With Volvo, Daimler and Scania gaining a foothold in the over-40-tonne heavy commercial vehicle category, it was time for Indian players to get their act together. “Indian manufacturers were not strong in heavy commercial vehicles because there was not much demand for them. But with exports and infrastructure stirring up, these have received a shot in the arm over the last four to five years,” says PricewaterhouseCoopers Leader (automotive practice) Abdul Majeed.

Tata Motors’ acquisition of Daewoo Commercial Vehicles in 2004 will help it compete in this niche segment. The Tata Prima promises to bring in heavy trucks that would match foreign brands at a lower price. However, the company insists that the features of the range, not the price, will be its USP.

A wider carriage base, stronger engine with much greater horsepower and higher load capacity (hence, a greater power-weight ratio) will let the Prima make the most of the new roads in the country. While earlier Tata Motors’ 40-tonne trucks had 180-200 bhp engines, the base model of the Prima (the 40-tonner) packs in 280 bhp of horsepower, though it is priced at Rs 20.5 lakh (about Rs 8 lakh more).

Tata Motors Commercial Vehicles Vice-president (sales and marketing) R Ramakrishnan says: “The transporter tends to overload since he is often not concerned about the time taken, while for the end user time is crucial.” The company cites feedback to claim that the Prima can cover 600 km with a single driver and 900 km with two drivers in a day, in sharp contrast to the 300-350 km that a 40-tonner with a 180-bhp engine would manage. So, the trucks would strive to increase the number of trips, which will bring down the acquisition cost and increase the revenue by nearly 50 to 100 per cent. The Prima’s powertrain will also ensure that it can weather travel for 330 days against the average of 240 days that a truck usually plies on Indian roads. Even the cabin space would allow it to cover distances faster.

The company is addressing existing customers, such as large fleet owners, for the Prima. Tata Motors Commercial Vehicles President Ravi Pisharody says, “We are doing concept selling where we identify long-distance routes that would justify a Prima truck and customers who ply on those. We choose mechanics along these routes to train them, stock spares and then move on to the drivers to train them for optimum usage of the trucks.” For now, it is mainly the east-west routes that are being picked.

The Prima would also break away from the tradition of getting sold as chassis with the rest of the body application being sourced from elsewhere, ie it will be pre-assembled. “It would arm customers to get financing and warranty on the entire vehicle with a single invoice. For us, it would help our bottom line and top line, and give us more experience in chassis engineering,” says Ramakrishnan.