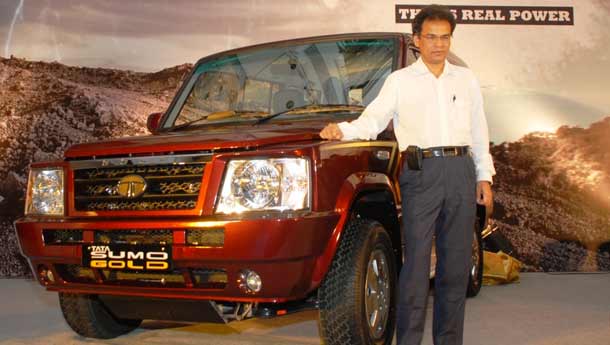 Aiming to be a leading player in the entry-level utility vehicle segment, auto major Tata Motors plans to sell 5,000 units of its latest 'Sumo Gold' each month over the next two months.


"We have cut the price by up to Rs 40,000. The vehicle's weight has been reduced, it has an improved CR4 engine delivering better mileage of 14.3 kmpl and pick up at 85 bhp. We have added new external and internal features in it," he told reporters here after unveiling the Sumo Gold.

He said the company aims to be a significant player in this segment with introduction of Sumo Gold. "Currently, Sumo sells about 3,000 units per month. Four months back, we were selling only 1,100 units. We have increased the volumes. Now we plan to sell 5,000 units in another two months," he said.

On producing Sumo Gold at their Pune plant, he said production is currently 3,000 units and can be "ramped" up as and when required.

He replied in the negative when asked if sales of the company's premium crossover "Aria" has been hit after entry of competitor Mahindra's XUV500 into the market and said demand was actually more.